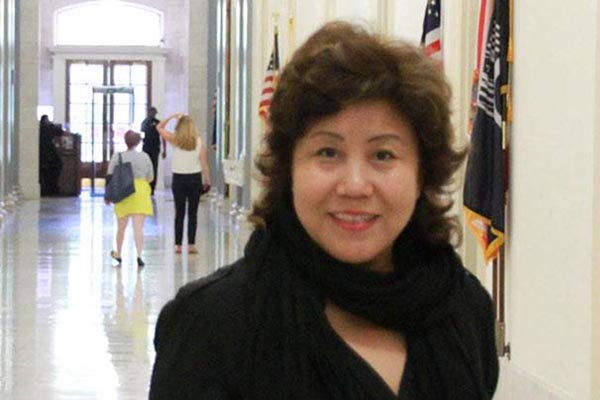 Lu Jinghua, who played a key role in the 1989 pro-democracy protests at Tiananmen Square in Beijing.

India has withdrawn visas granted to two well-known Chinese dissidents, Lu Jinghua and Ray Wong, who were set to attend a China-focussed conference on democracy in Dharamshala.

The withdrawals occurred days after New Delhi cancelled the visa granted to Germany-based Uyghur activist Dolkun Isa, who too was set to attend the same conference that will be addressed by the Dalai Lama. China has branded Isa a terrorist and Interpol has issued a red corner notice for him.

Lu, who is best-known for her role in the 1989 Tiananmen Square protests and figures on a Chinese list of “major criminals”, learnt of the withdrawal of her visa just as she was about to board a New Delhi-bound flight from New York on 25 April.

The visa for Hong Kong pro-democracy activist Ray was reportedly withdrawn at about the same time.

Speaking to Hindustan Times from New York, Lu, now a US citizen, sounded bitter and angry at the last-minute cancellation.

The 54-year-old activist indicated the cancellation and the way she was made to run from the Indian consulate to a separate visa office after that amounted to harassment.

“I had checked in with a copy of my e-visa at the JFK airport and was about to board the flight to New Delhi on 25 April. Then, suddenly, an airline official asked me to wait,” she said.

She alleged that the official made a few long-distance phone calls and thereafter she was told she could not board the flight.

“I was made to wait. People were watching me. I felt embarrassed and shocked. I asked why? What was the reason?” But she got no answer.

Lu said she was “very disappointed” with India. “In January, I went to Taiwan. There was no problem. Why did India cancel my visa? If it was China, I would have understood.”

Government sources in New Delhi said Lu’s visa was withdrawn because her documents were “ineligible” and there was an “inconsistency” about the purpose of her visit. In Ray’s case, there was “data inconsistency” in his papers, they said.

More than that, an official who didn’t wish to be named said allowing Chinese dissidents to visit India and “indulge in anti-China propaganda” doesn’t fit into New Delhi’s policy for Beijing.

“Both countries have been following this policy for many years … That’s why we don’t allow protests by Tibetans living here in exile,” the official explained, giving an insight into the sensitive nature of relations between the two Asian giants.

An unknown number of civilians, mostly students, involved in the Tiananmen Square protest for political reform in China were massacred in the army-conducted crackdown. Many protestors, like Lu, slipped out of China in the aftermath. She is now a human rights activist.

China remains very sensitive about incidents and individuals linked to the Tiananmen protests. Around the anniversary of the demonstrations in June every year, there is a tightening of security across the country, especially in Beijing.

The conference in Dharamshala, to be held between 28 April 28 and 1 May, is being organised by US-based Citizen Power for China. The group is led by Yang Jianli, who too was involved in the 1989 Tiananmen Square protests.

The three visa cancellations within a week – apparently at the behest of China – are likely to trigger criticism against the Narendra Modi government.

Beijing had reacted with anger after India issued a visa to Isa earlier this month.

New Delhi has pointed out that Isa had an Interpol red corner notice against his name and he suppressed facts in his visa application.

“Isa applied for a tourist visa … After obtaining the visa, Isa stated publicly that he was coming to attend a conference, a fact which was suppressed in the visa form and something that a tourist visa does not permit,” external affairs ministry spokesperson Vikas Swarup said.

Isa, from the World Uyghur Congress (WUC), has been accused of terrorism and conspiracy to kill people in Xinjiang in China’s remote northwest. The WUC is a grouping of the Uyghur community outside China.