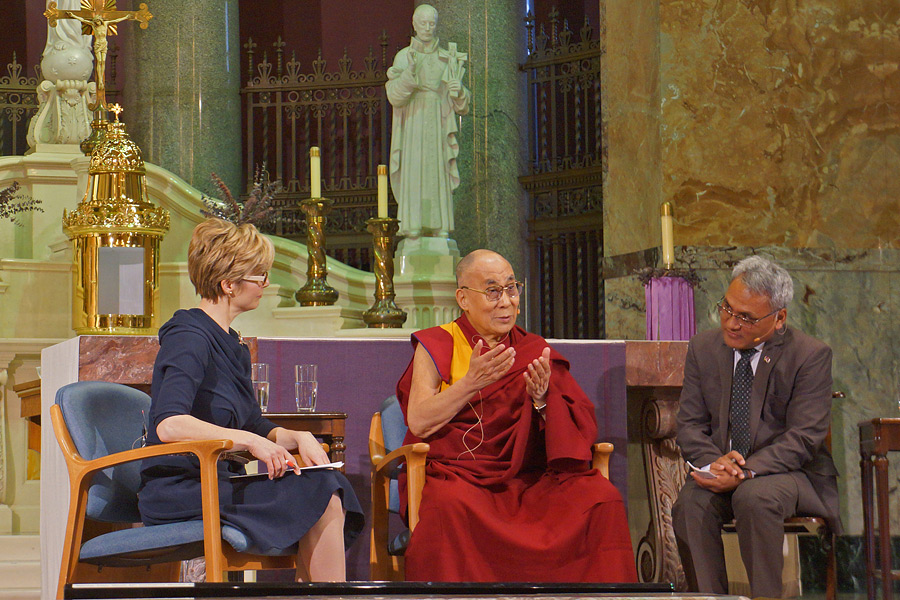 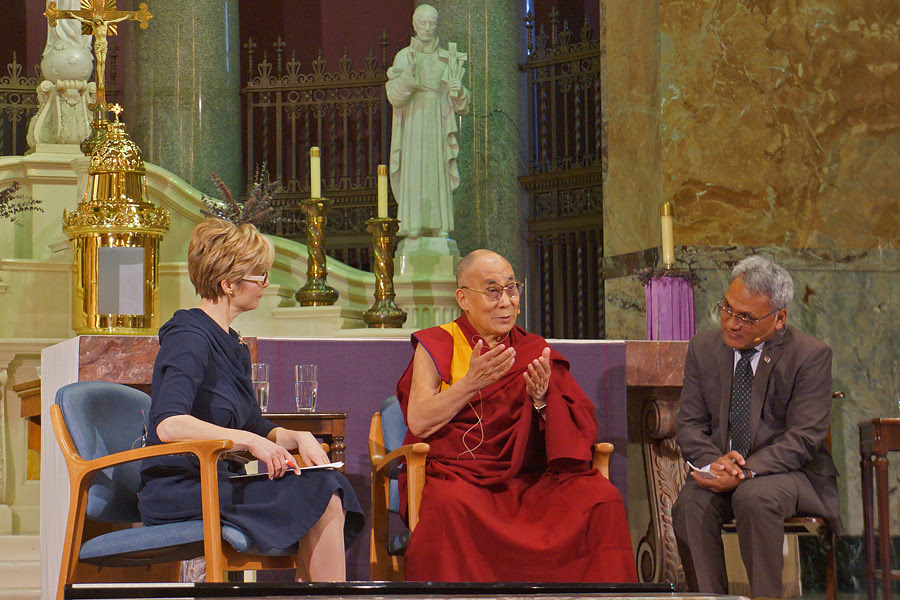 Cathy Wurzer asking His Holiness the Dalai Lama questions from members of the audience during his talk at the chapel of the Mayo Clinic in Rochester, Minnesota, USA on February 29, 2016. Photo/Jeremy Russell/OHHDL

The sky was bright but the breeze cool as His Holiness the Dalai Lama walked from his car to a small chapel at the Mayo Clinic after lunch this leap year day. Many of the 500 people who had won a lottery for seats at the occasion turned to watch as he walked smiling up the aisle, his hands folded in greeting. President and CEO of Mayo Clinic, John Noseworthy, was on hand to introduce him and invite him to speak about Compassion in Medicine. When he had done so, His Holiness insisted that he sit next to him. The talk was broadcast over the Clinic’s intranet and webcast around the world.

“Brothers and sisters, it’s a great honour to have this opportunity to speak to all of you who make such a positive contribution to the clinic’s work,” His Holiness began. “You treat hundreds of thousands of people who come with hope and you fulfil their hopes. Looking after those who are in physical and mental pain is a challenge. I’m an old patient and this time I’ve spent more than a month here, during which time the doctors, nurses and technicians have all been very kind. Besides exercising your professional skills, you have been caring, concerned and friendly. It’s an honour for me to talk to you today.”

He remarked that religious faith has long been a source of solace and support for people facing difficulties. Faith brings hope and optimism even to the dying. He added that he doesn’t have much time for formality and that since we are all the same as human beings, we need to think of one another as brothers and sisters.

“The differences between us of race, nationality, faith, or whether we are rich or poor, educated or uneducated, are secondary to our basic sameness as human beings. When we stress such differences it just causes problems between us. At a fundamental level we are the same. If we were to emphasise this basic sameness among all 7 billion human beings alive today, it would reduce many of the problems between us. This is why I greet people I talk to as ‘brothers and sisters’.

“If I think about how I am different from you, that I’m from Asia, I’m a Buddhist monk, a Tibetan, or even that I am His Holiness the Dalai Lama, it creates a barrier between us behind which I find myself alone. When I think of myself as a human being like all of you in the audience, there’s no barrier between us. Remembering that all 7 billion of us belong to one human family is very important in today’s world. It’s how we can ensure harmony among humanity. But we need to make an effort to educate people about this reality.

“Faced with a patient in need of help, those of you who provide care in this hospital don’t first ask where they come from or what they believe, you examine what their problem is and how you can help and treat them. If we could apply such an open attitude in all our relations, everyone would benefit. Compassion is about showing care and concern for others. When you do that you benefit the family and friends of the patient too.
“Now I’d like to have some more interaction with you and answer some of your questions. I welcome your comments or even criticism because I believe that it’s by answering such challenges that we learn.”

Cathy Wurzer, a local Twin Cities’ TV host, took the chair next to His Holiness to put the audiences’ questions to him. She began by asking how to increase respect for others. His Holiness replied that we are all formed the same way, in the womb. A new-born child and mother are naturally drawn to each other. This is the same for all of us. We are also all the same in wanting to live a happy life. It’s on such a basis that we can treat each other with respect.

He said there are times when you may be angry with someone and you only feel hostile towards them. But there are likely to be many causes of your anger and you may have contributed to some of them. He mentioned the advice of cognitive therapist Aaron Beck that when you are angry and the person you are angry with seems completely negative to you, you need to recall that 90% of that feeling is your own projection. Anger is not fixed or absolute. It changes. He said that many of our destructive emotions are mixed with exaggeration. As human beings we have a marvellous brain that allows us to consider things from different angles and that can be a way of dealing with emotions like anger.

Asked how to respond to people who have difficulty accepting their illness, His Holiness advised letting them calm down, expressing concern for them and, showing a smiling face, letting them feel confident that you will do what you can to care for them. He recommended letting them know the reality of their condition, how seriously ill they are. 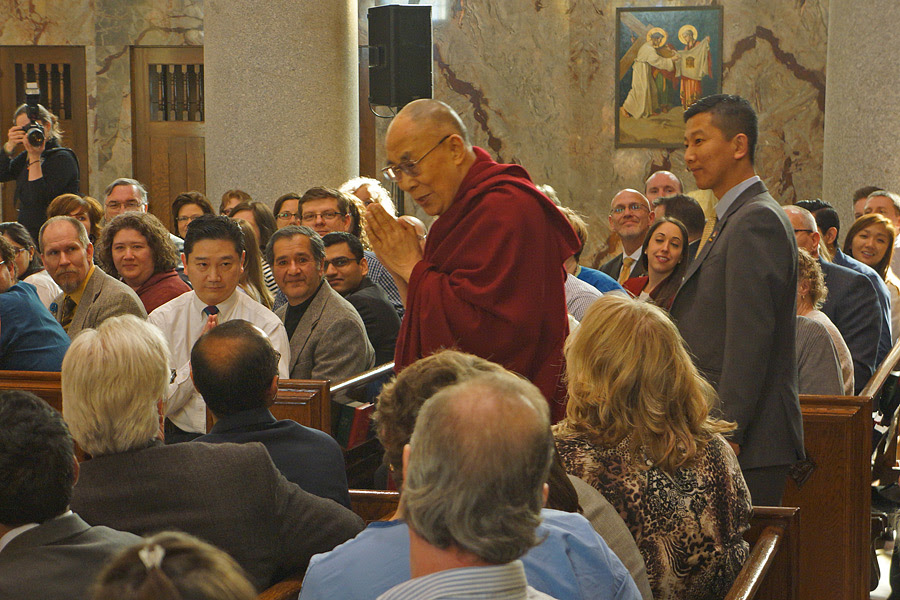 His Holiness the Dalai Lama greeting members of the audience as he arrives at the chapel of the Mayo Clinic in Rochester, Minnesota, USA on February 29, 2016. Photo/Jeremy Russell/OHHDL

Ms Wurzer commented that some people seem able to regard their cancer or terminal illness as a blessing. His Holiness responded by telling her of a Tibetan he knew who asked his doctor to tell him the truth of his condition, to warn him so that, if need be, he could prepare for death. Anything else he said would be a kind of self-deception.

To a question about how care-givers cope with the helplessness of not being able to do more for their patients, His Holiness said:

“Be as kind as you can. Showing loving kindness is an important way to keep the dying person in good spirits. Many of us believe that having a positive frame of mind, feeling optimistic at the time of death is important for our next life. Christians should remember God and feel confident of going to heaven. Falling into despair and depression is of no help at all.”

He went on to say that our disturbing emotions are generally linked to ignorance, not understanding reality. To address this it is helpful to learn how our minds and emotions work, and then tackling difficult situations will be easier.

Asked whether to be compassionate it’s necessary to believe in a personal God, His Holiness replied that he understood that for believers each life is created by God, that God is infinite compassion and that as children of God each of us has a spark of compassion within us. Non-believers may disregard love and compassion as simply religious qualities when in fact they are basic human values.

“Without love between us how can families and communities be happy? We are social animals and what brings us together is love. No one can survive entirely alone, we depend on one another. Whether you believe in religion or not, as a human being, happiness is related to your state of mind not just to your various sensory experiences, what you see, hear, taste and touch.”

Noting that even amidst all the comfortable facilities you could wish for it’s possible to be unhappy, while many among the poor are happy and content nevertheless, His Holiness told the story of a monk he met in Barcelona. He’d spent five years as a hermit in the mountains, living on little more than bread and tea. When they met His Holiness asked about his practice and the monk told him that he had meditated on love. And when he did so, there was a sparkle in his eyes of true happiness and satisfaction. His Holiness concluded that what we really need to do is use our intelligence to develop inner peace.

Asked the relationship between this and technology, he declared that technology is wonderful, but it depends on how we use it. He alluded to what can also be learnt from the science and philosophy found in ancient Indian thought.

Questioned about how to keep your spirits up when faced with anguish and suffering, His Holiness remarked that emotions that contribute to inner peace are constructive. He said there are two kinds of compassion. One is a biased concern for those we know, but another has the vaster scope of recognising that each of us is a human being and has the goal that all human beings should be happy. It’s on the basis of such warm-heartedness that we can contribute to others’ welfare. To create a more compassionate world, we need such a change of heart.

He cited scientific evidence that infants, even before they can talk, show a preference for examples of helpful behaviour and turn away from illustrations of harm. The conclusion is that basic human nature is positive and kind. Therefore cultivating warm-heartedness and compassion is something we can all do.

As the audience stood and applauded, His Holiness expressed his gratitude and stepped out into the bright cold to drive back to where he’s staying. 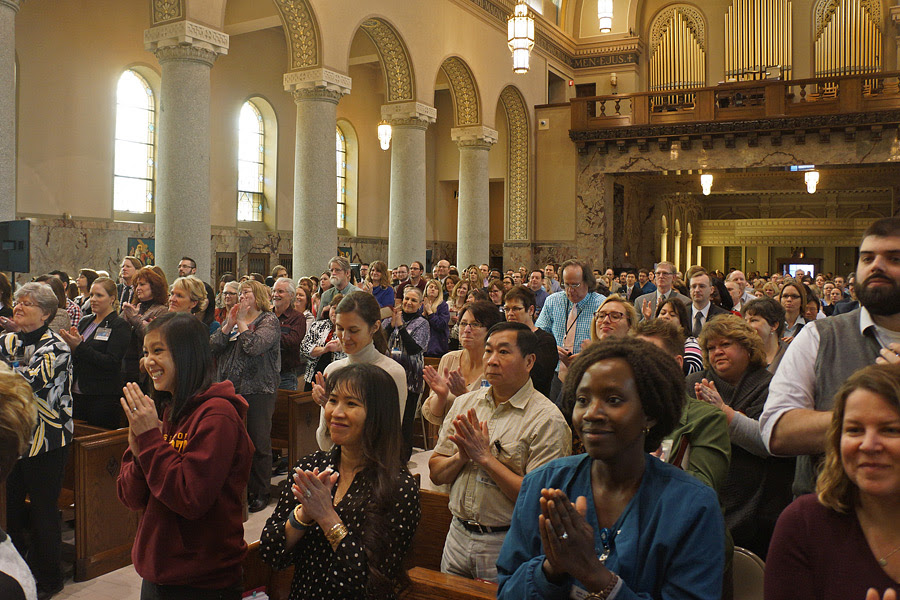 Members of the audience thanking His Holiness the Dalai Lama after his talk at the chapel of the Mayo Clinic in Rochester, Minnesota, USA on February 29, 2016. Photo/Jeremy Russell/OHHDL