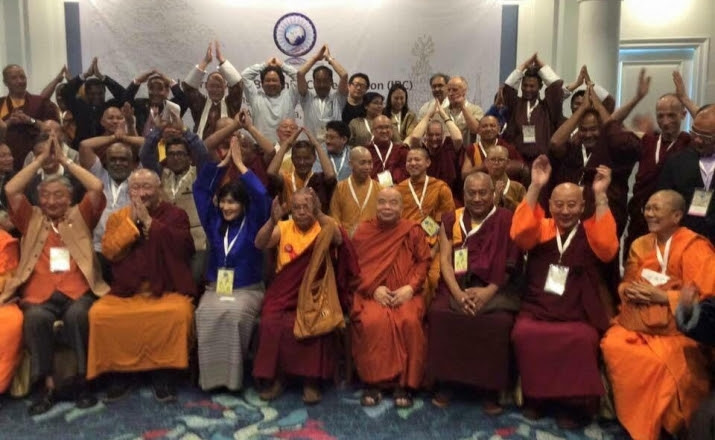 Delegates and guests of “The Governing Council Meeting of the International Buddhist Confederation” assemble. Photo by Buddhistdoor Global

Buddhist communities from all over the world gathered in the historical Thai city of Ayutthaya,  Bangkok, “The Governing Council Meeting of the International Buddhist Confederation.” The three-day conference will review the progress of ongoing activities and upcoming events, and will also discuss ways in which Buddhists can help the international community achieve global sustainable development goals.

An opening ceremony for the gathering, organized by the International Buddhist Confederation (IBC), the International Network of Engaged Buddhists (INEB), and Thailand’s Thammasat University, was held at the city’s Wat Mahathat (Temple of the Great Reliquary), with a welcome address given by Her Royal Highness Princess Ashi Kesang Wangmo Wangchuck of Bhutan.

Notable guests include Rev. Khamba Lama Gabju Choijamts Demberel, the supreme Buddhist leader in Mongolia; His Holiness Sanghanayaka Suddhananda Mahathero, supreme patriarch of Bangladesh; Ven. Banagala Upatissa, president of the Mahabodhi Society of Sri Lanka and the chief sangha nayaka of Japan; and His Eminence Telo Tulku Rinpoche, the spiritual head of Buddhists in the Republic of Kalmykia. Scholars and members of Buddhist organizations from around Asia as well as Africa, Argentina, Australia, Brazil, France, Germany, Jamaica, Japan, Mexico, and Mongolia are also in attendance.

In his opening address, the governor of Ayutthaya and guest of honor Prayoon Rattanasenee gave a brief summary of Ayutthaya’s historical roots as a Siamese kingdom that existed from 351–1767. Prayoon noted that at its height, ancient Ayutthaya was one of the wealthiest cities in the world and that the abundance of ancient temples and monasteries still standing bore vivid testament to the influence of Buddhism in the kingdom.

“India and Thailand have enjoyed a close relationship for many centuries,” Prayoon went on to observe. “India has had a deep influence on many aspects of Thai life, especially language, culture and religion. In this regard the IBC can be the vehicle through which India and Thailand could come closer by re-exploring and rejuvenating their spiritual and cultural ties that have been in existence since ancient times.” (International Buddhist Confederation)

Prayoon emphasized that as a representative for Buddhists all over the world, the IBC had the mandate to bring to bear the collective wisdom of all Buddhist traditions as an instrument for making a difference in the world and bringing together the peoples and nations of the world. “We are like seeds; seeds of hope,” he said. “And if we think and practice the Buddhist way of life, which means developing an attitude of loving kindness and compassion, and cultivating an attitude of respect towards the nature and each other, then we can reduce conflicts and develop peace in the world.” (International Buddhist Confederation) Conference delegates meet during the second day of “The Governing Council Meeting of the International Buddhist Confederation.” Photo by Buddhistdoor Global

Buddhistdoor Global senior correspondent and editorial writer Raymond Lam, one of the conference delegates, is scheduled to give a presentation tomorrow during the conference’s third session titled “Media and Publicity,” which is chaired by His Eminence Telo Tulku Rinpoche.

Founded in 2012, the IBC is a global body headquartered in New Delhi with a membership of more than 320 monastic and lay Buddhist organizations in 39 countries. The IBC’s council of patrons includes His Holiness the Dalai Lama and high-ranking monks from Buddhist countries including Cambodia, Laos, Mongolia, Myanmar, South Korea, Sri Lanka, Thailand, and Vietnam. Working under the motto “Collective Wisdom, United Voice,” the IBC aims to provide a united voice for all Buddhist traditions to ensure that Buddhist values and principles are an important part of the global social and political discourse on major issues.Promoting inter -faith understanding is among the main areas of focus of the IBC.