cleans the lens of the mind

Mar 02, 2016 Shyamal Sinha, New Delhi OPINION Comments Off on cleans the lens of the mind 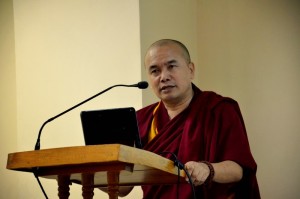 misperception, this ignorance and its subtle stains which defile our mind need to be purified.

For eliminating the ignorance, one has to revolutionize the way our minds perceive the world.

amongst the five aggregates of body and mind, the aggregates as well are objectively void as they

are also seen as not different from their own constituents. This thus points to the absence of

objectivity across the board of existence. Dream-like nature of all phenomena is established.

the form, one furthers towards reflecting the same on the remaining aggregates – feeling,

discrimination, compositional factors and consciousness. Reflecting on the emptiness of feeling

which is of three kinds – pleasure, pain and neutral – is extremely important.

emotions such as attachment, anger and ignorance.

Of the three destructive emotions, ignorance lays the ground for the other two  – attachment

and aversion. Seeing  things as independently there from the object side orchestrates the mind to

latch on to the object when it is seen as attractive which is attachment. It triggers aversion when

the object is seen as objectively undesirable. Aversion or anger comes in the facade of service to

feed attachment and to destroy what is felt as threat to feeding pleasure to attachment.

Feelings in the form of pleasure or pain, feed the attachment and aversion which in turn

feeling of fear and pain. In the process of the operation of the world, instead of subsiding fear

and pain, more complications arise thus demeaning peace and happiness in the world.

appear to us as objectively real, we can successfully  undo the complications.  By seeing the

feeling of pain or pleasure as dream-like devoid of objective reality, the corresponding response

in the form of attachment and aversion will cease. Therefore to see the ultimate reality of the

feelings is very important. Fearlessness will dawn in us at times where otherwise fear and anxiety

would have surged when meeting with unpleasant feelings. Since fear steals our peace and