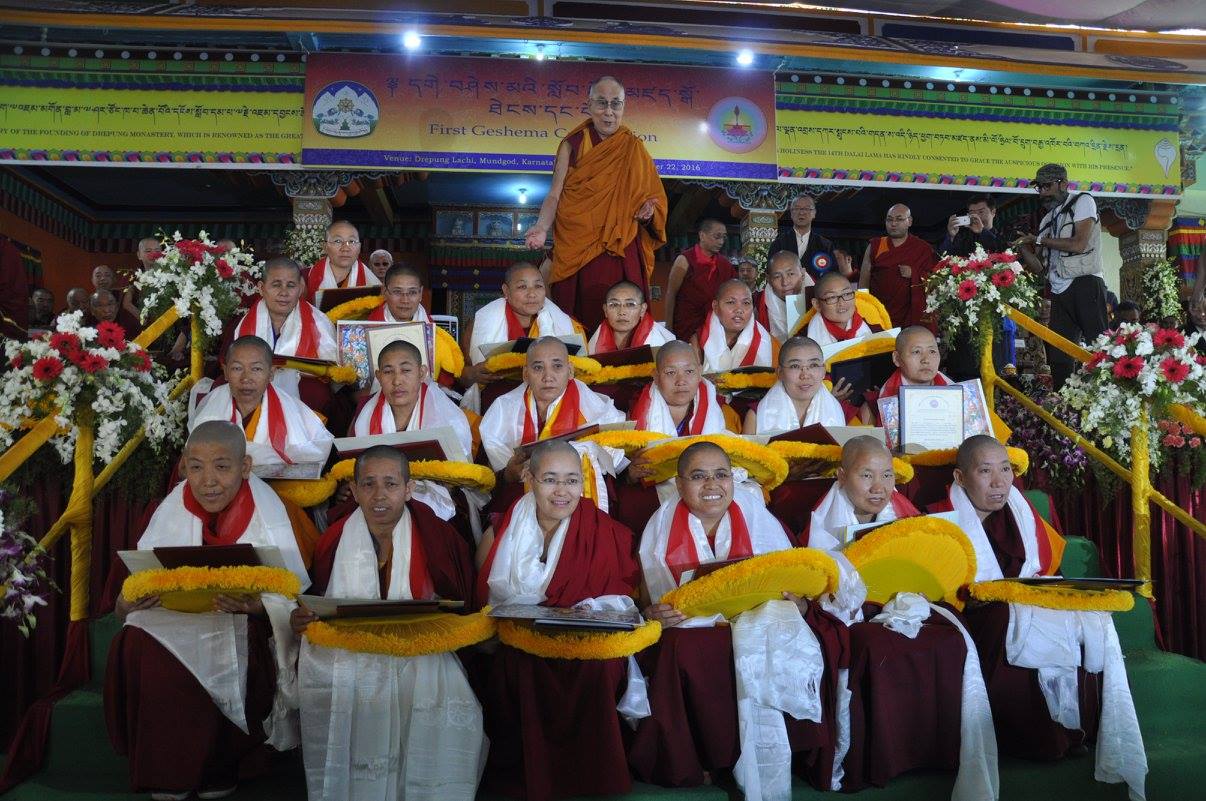 MUNDGOD: Twenty Tibetan Buddhist nuns today became the first in the history of Tibetan Buddhism to receive the Geshema degree, the highest academic title in Tibetan Buddhism. The degree was conferred this morning by His Holiness the Dalai Lama to the nuns at a ceremony held at Drepung monastery in Mundgod, South India.

The conferment of Geshema degree to Tibetan Buddhist nuns was a longstanding aspiration of His Holiness the Dalai Lama and reflects a historic milestone, as the degree was awarded only to male monks earlier.

At the conferment ceremony, His Holiness the Dalai Lama spoke about the immense contribution of education towards gender equality in the world. His Holiness also emphasised the need for secular ethics to make modern education more holistic.

“Through the power of education, women have been able to rise up to prominent roles including leadership in various societies. Education has played a big role in the advancement of gender equality and material development. However, when you think about secular ethics like compassion, modern education is still not sufficient,” His Holiness said.

His Holiness the Dalai Lama has, earlier at Bangalore, said that the conferment of Geshema degree to Tibetan Buddhist nuns is his contribution to the advancement of Buddha dharma. “The tradition of honoring Geshema degree is a need of the hour as it is purely based on one’s meritorious achievement in the field of Buddhist study.”

Tibetan political leader Sikyong Dr Lobsang Sangay welcomed the conferment of the Geshema degree to Tibetan Buddhist nuns as a step towards gender equality in education. “I heartily congratulate the twenty nuns who are receiving the Geshema degree. This is a result of your hard work and dedication,” he said.

He further spoke about the Tibetan administration’s own efforts to advance gender equality through practical policies and trainings. “Our view on women empowerment is not borne out of competition between men and women. Our objective is to create the opportunity and capacity for women to showcase their potential based on merit,” he said.

“Women’s leadership is taking prominence in the world. It is time for women to hold the mantle of leadership and this will ensure that the earth will be a more peaceful place on planet,” he added.

The historic decision to confer the Geshema degree to Tibetan Buddhist nuns was announced in 2012 by the Department of Religion and Culture following a meeting of representatives from six major nunneries, Institute of Buddhist Dialectics and the Tibetan nuns project.

Geshema or Geshe when awarded to male monks, is comparable to a doctorate in philosophy. The degree is conferred after at least 21 years of rigorous study of the five main Buddhist texts, combined with a regular session of prayers and recitations.

“I am extremely happy and proud to be one of the first Geshema degree holders in history. I am grateful to His Holiness the Dalai Lama for making it possible for us to attain this degree on this historic occasion,” Namdol Phunstok, a nun from Kopan nunnery, Nepal, and one of the twenty nuns who received the degree, remarked after the ceremony.