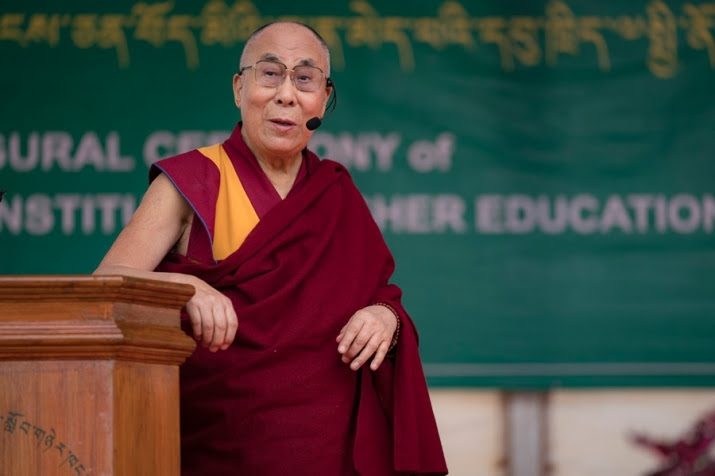 His Holiness the Dalai Lama speaks at the official inauguration of the Dalai Lama Institute for Higher Education. Photo by Tenzin Choejor. From dalailama.com

The Dalai Lama  officially consecrated the Dalai Lama Institute for Higher Education in the southern Indian city of Bengaluru taking the opportunity to congratulate the college’s first raft of graduates. His Holiness also laid the foundation stone for a branch of Men-Tsee-Khang, the Tibetan Medicine and Astro-science Institute, which will be constructed nearby.

An undertaking of the charitable non-profit Tibetan Children’s Village, the Dalai Lama Institute for Higher Education initially began as a teacher-training center in August 2008. In 2013, the institute was recognized by the University of Mysore under its statute of outreach and specialized programs. The Dalai Lama Institute for Higher Education is the only Tibetan institute of higher education in exile that offers both regular and specialized undergraduate degree programs. In June this year, the institute marked its first graduation day, when 77 students graduated from five undergraduate programs. The 18-hectare institution currently hosts 316 Tibetan students, primarily from Tibetan Children’s Village in the northern state of Himachal Pradesh.

Karnataka Home Minister, Dr. G. Parmeshwar and University of Mysore Vice-Chancellor K. S. Rangappa attended the ceremony as guests of honor, jointly cutting a ribbon to mark the official inauguration, which was attended by some 2,000 Tibetan guests and donors. The Home Minister assured those assembled of the continued support of the state government. “I first came to Karnataka in 1956, and even then Mr. Nijalingappa showed real concern about what was happening in Tibet,” the Dalai Lama said of Karnataka’s former chief minister. “When we escaped to India in 1959, he was the most generous of the chief ministers who responded to prime minister Nehru’s plea for land on which to settle Tibetan refugees. I really appreciate the way the Karnataka Government has continued to support us in the same spirit down the years.” (The Office of His Holiness the Dalai Lama)

Speaking on the importantce of creating opportunities foe education, His Holiness emphasized the urgent need to address the destructive human emotions that lie at the root of many of the problems facing the world today, noting that this required in-depth study into the way the mind and emotions function. Since centuries of Tibetan learning on the subject is clear and accurate, preserving the Tibetan language is vital, he said, underlining the importance of employing reason and logic to this end.

The institute’s principal, Dr. B. Tsering, announced that an earlier request to set up a research center at the college had been approved just two days before the inauguration, which would enable it to introduce master’s and PhD programs in Tibetan studies. She explained that one of the main aims of the college, which is open to Indian as well as Tibetan students, is to train its students to become competent, capable leaders. Acknowledging the support of the University of Mysore since 2013, Tsering highlighted that one of the institute’s defining characteristics was its ability to function in the Tibetan language, noting that students could undertake study Tibetan, English, and Chinese languages and literature. The Dalai Lama with students and staff of the Dalai Lama Institute for Higher Education. Photo by Tenzin Choejor. From dalailama.com

“When we came into exile, preserving our identity, language and culture was our priority,” His Holiness observed during the proceedings. “Now we can serve humanity by sharing the benefits of ancient Indian knowledge with others. This is something you young people studying today can do. Think not only of the interests of Tibetans, but of the whole of humanity. We regularly pray for the welfare of all sentient beings and, while there may be all kinds of beings in other parts of the universe, the 7 billion human beings alive on this planet today are the ones we can directly engage with.” (The Office of His Holiness the Dalai Lama)