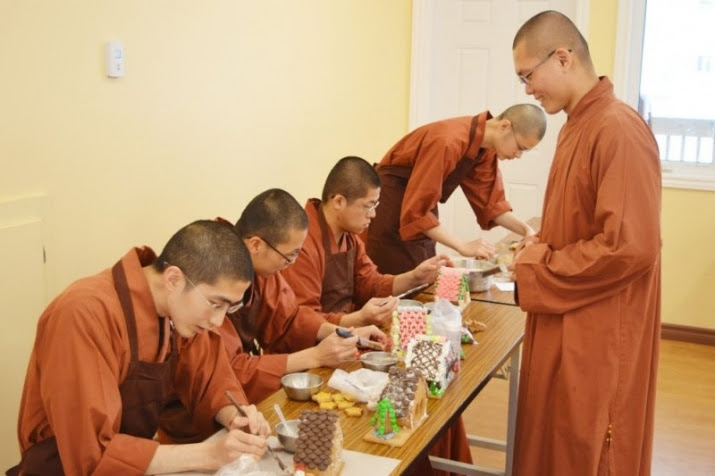 Venerable Xingxun, right, observes four Buddhist monks hard at work on special gingerbread houses. From theguardian.com
Great Enlightenment Buddhist Institute Society (GEBIS) is a Canadian registered charitable organization which was incorporated in British Columbia, Canada in 2006, and registered in Prince Edward Island in 2008 and in Ontario in 2013.After a long and wide search for a location in different continents, GEBIS finally arrived at Prince Edward Island, Canada and set up a global platform for advanced Buddhist education. As of the end of year 2013, more than 800 monastics and 3,000 lay practitioners had attended our meditation programs

Buddhist monastics do not observe Christmas in any religious sense, this year monks and nuns from the Great Enlightenment Buddhist Institute Society (GEBIS) and the Great Wisdom Buddhist Institute (GWBI) have embraced the holiday spirit alongside the residents of Prince Edward Island (PEI) by making light offerings and hosting a Christmas meal for senior citizens in Murray Harbour on 17 December. According to The Guardian, they put up lights on trees and dedicated the lights to all beings for the attainment of wisdom and the elimination of ignorance. They also made gingerbread houses from locally sourced ingredients for the Christmas meal.

Both the GEBIS and the GWBI are Buddhist organizations on Prince Edward Island. While the GEBIS has set up a global platform of advanced Buddhist education for monastics and lay practitioners through a research and educational institution called the Moonlight International Academy, the GWBI focuses on nurturing Buddhist nuns with comprehensive classes, such as praying, prostrations, and discussing Buddhist sutras and commentaries.

“We’re so appreciative of what [the] islanders have done for us so we want to pay back [the] islanders, and one particular event that we are doing this year is to offer a Christmas meal,’’ Ven. Xingxun told The Guardian through an interpreter at the GEBIS monastery.

According to The Guardian, the monks and nuns will be observing the same routine and daily schedule as usual on Christmas Day. Morning and evening prayers will be dedicated to peace and happiness for all beings. The GWBI nuns have also put up a Christmas tree outside their monastery, which was decorated with beautiful lights. Ven. Sabrina, a nun, told The Guardian: “We want to fit in with the Island and also just kind of give back to our neighbours. We’ve been hanging up some Christmas lights. It’s really beautiful. We have a really big tree outside and then we put lights on it and we’ve been giving out treats to our neighbours and our friends, just because we really like the gift-giving part of Christmas.’’

“We believe that by having Jesus to be up here in the world, he brings a lot of positive influences to people,’’ said another nun, Ven. Yvonne. “We want [the same thing], to make positive changes and different influences to the world. I personally want to do that.’’ (The Guardian)

Ven. Yvonne said her wish is to do whatever she can to make her parents and every one around her happy: “After my breakfast (on Christmas Day) I wish that whatever I do . . . I can send out best wishes to the people [of PEI]. It may be just another day for me but the birth [of Jesus], it’s inspiring us to do something better for the world. It’s good practice for us, too.’’ (The Guardian)

According to The Guardian, the monks at GEBIS are also welcoming the islanders into their prayer hall in monastery on New Year’s Eve to ring the bell and join prayers for blessings in the New Year.

The mission of GEBIS is to nurture monks and nuns, religious education workers, spiritual counselors, ministers, and preachers of the Buddhist faith for the twenty-first century. We will accomplish this mission through the development of an officially registered educational institute, Moonlight International Academy, offering advanced education guided by the principles of Buddhist teaching.

The emphasis of the education at Moonlight International Academy will be on integration of Buddhist principles in selected programs. We also focus at the development of qualities of a kind heart, tolerance, forgiveness, and joy in our students, as a foundation for active engagement in the community and benefit of the world.