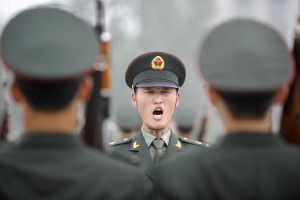 IN CHINA’s drive to modernize over the past few decades — a period in which it became an economic superpower — civil society groups took root, helping fight poverty and environmental damage, offering legal services, aiding migrants, and improving health care and education, among many other worthy pursuits. These groups, often supported from abroad, filled an important niche and attempted to remedy what the Chinese state neglected in an era of rapid change. The groups were loosely tolerated in a kind of gray zone .

On Thursday, China took a major step toward ending that ambiguity and approved a law that could severely restrict the work of thousands of nongovernmental organizations, or NGOs, that receive help from overseas. After a months-long delay, the Standing Committee of the National People’s Congress approved the third draft of a bill that would put foreign NGOs under the thumb of the Ministry of Public Security, rather than the Ministry of Civil Affairs, which had overseen them. In effect, China will place the NGO sector under the police, effective Jan. 1, 2017.

The implementation of law in China is always uncertain, but the message is unmistakable. Most of these civil society groups lend a hand to the powerless, and not infrequently they come up against the bureaucracy and the state. If an NGO becomes too aggressive or demanding, or simply displeases the authorities, it may quickly face sanction by the Ministry of Public Security, which exists to protect the ruling Communist Party. The new law will give the ministry intrusive powers to register all such groups, examine their finances and interrogate workers. Those NGOs that are not approved will be forced to close. It appears the most draconian aspects of earlier drafts remain, despite protests from NGOs and foreign governments.

China has been at the forefront of a war on NGOs that is being waged by authoritarian regimes around the world fearful of popular uprisings and suspicious that NGOs are planting seeds of revolt. In recent years, dozens of nations have imposed onerous rules, drying up international funding, limiting freedom of association and branding groups as “foreign agents” or spies.

Even before adopting the law, China did not hesitate to quash those groups it suspected of supporting democracy, free speech and human rights. But now President Xi Jinping is going further than his predecessors in the post-Mao era. He is systematically attempting to strengthen the machinery of the Chinese state and impose top-down controls on civil society. Not every NGO will be policed under the measure, but just the threat of it will raise doubts among those wanting to help the dispossessed and distressed in China. The new law reflects Mr. Xi’s fear of his own people. It may make him feel more secure, at least for a time, but it will bring tangible suffering to the Chinese population.

Dalai Lama’s temple to open for public after two years

In Pictures: Sakya School of Tibetan Buddhism offers Tenshug to His...