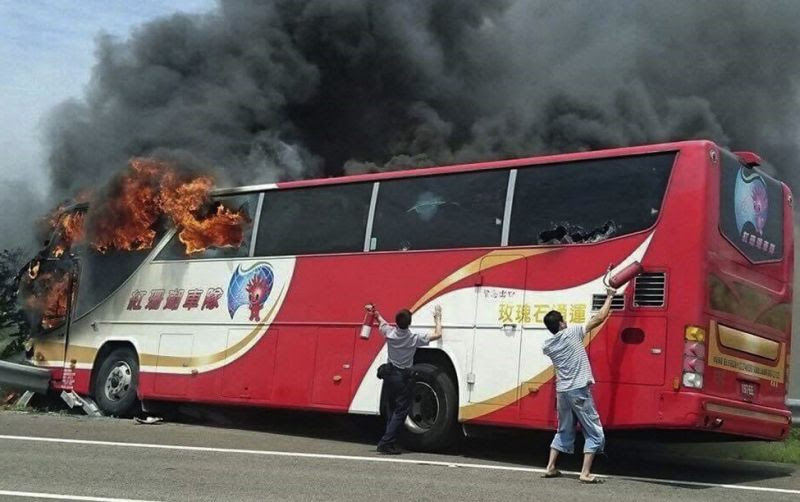 In this photo provided by Yan Cheng, a policeman and another man try to break the windows of a burning tour bus on the side of a highway in Taoyuan, Taiwan, Tuesday, July 19, 2016. The tour bus carrying visitors from China burst into flames on a busy highway near Taiwan’s capital on Tuesday, burning to death over 20 people on board, officials said .(Yan Cheng/Scoop Commune via AP)

TAIPEI, Taiwan (AP) — A tour bus carrying visitors from China burst into flames on a highway near Taiwan’s capital on Tuesday, killing all 26 people on board, officials said, in the deadliest incident involving Chinese tourism to the island.

The accident took place on the No. 2 national highway in Taoyuan county, south of Taipei, where Taiwan’s international airport is located, the county’s fire and rescue service said in a statement.

It said 24 of those on board were visitors from northeast China’s Liaoning province who had been scheduled to fly home on Tuesday afternoon. The others killed were the driver and a tour guide, both Taiwanese.

Taoyuan fire chief Lai Chi-chong said all of the victims died inside the bus. “There was not enough time for them to escape,” he told reporters.

Video from the scene showed both of the bus’s doors pressed up against the highway’s guard rail, making them impossible to open. Photos showed flames and thick black smoke pouring from the front of the bus.

Many of the bodies were badly charred, some of them piled in front of the unopened emergency exit, Taiwan’s official Central News Agency and other media reported.

There was no official word on the cause of the fire, although CNA and others said that the bus apparently burst into flames after spinning out of control and smashing into the guard rail.

CNA cited eyewitnesses as saying the bus had been giving off smoke and swerving from lane to lane prior to crashing and bursting into flames.

The drivers of other vehicles pulled over and attempted to put out the flames with fire extinguishers, but the fire had grown too large for them to put out, the news agency said.

Thirteen firefighting vehicles and 30 firefighters were sent to the scene, but the fire apparently spread too rapidly. By the time the flames were extinguished, the vehicle had been heavily blackened from one end to the other.

Three of the victims were children — two 13-year-olds and a 12-year-old, according to a passenger manifest distributed to media by the Taiwanese travel agency that organized the trip.

The accident was the deadliest involving Chinese visitors to Taiwan since the island opened up to Chinese tourism in 2008, according to Taiwanese government records and reports of previous incidents.

Since then, 83 Chinese have died while on trips to Taiwan, including Tuesday’s victims. Several of those deaths involved bus crashes, including a 2010 crash that killed 19, and the latest accident is likely to revive safety concerns surrounding the treatment of Chinese tourists, most of whom come on cheap group tours.

China’s Taiwan Affairs Office said it would send representatives to help deal with legal issues surrounding the crash. China claims Taiwan as its own territory and the sides have no formal ties, although contacts have been growing in recent years to handle trade, travel and other practical, nonpolitical matters.

However, relations have deteriorated since the January election of independence-leaning Taiwanese President Tsai Ing-wen, and Chinese tourist numbers have declined steadily in recent months, dealing a major blow to the island’s travel industry.

Dalai Lama’s temple to open for public after two years