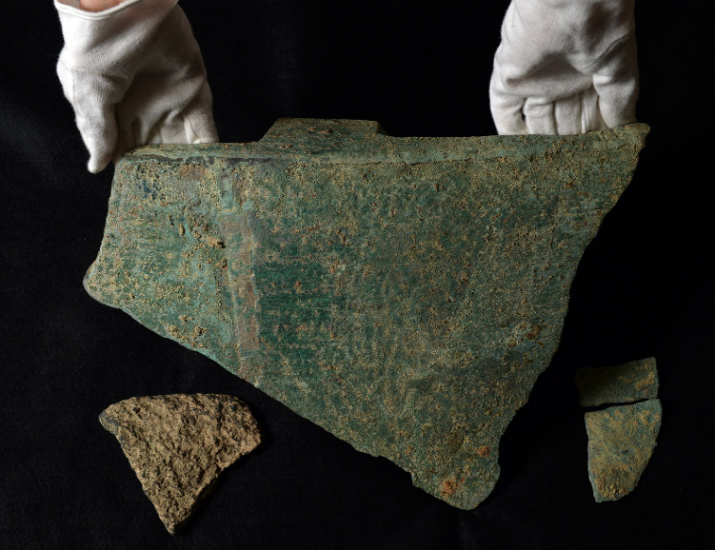 The excavated bronze fragments that may have formed part of the Kitayama Daito pagoda. From mainichi.jp

Archaeologists in Japan have identified three decorative bronze fragments unearthed in the grounds of Kyoto’s famous Kinkaku-ji Zen Buddhist temple as the remains of what might once have been the tallest Buddhist pagoda ever built in Japan.

Scholars believe the fragments, discovered during excavation work carried out between April and July 2015 to develop the parking area of Kinkaku-ji, may once have formed part of the tip of a pagoda called Kitayama Daito, said to have been constructed within the grounds of Kinkaku-ji at the order of Ashikaga Yoshimitsu (1358–1408), the third shogun of the Ashikaga or Muromachi shogunate (1338–1573).

Kinkaku-ji (Temple of the Golden Pavilion), officially named Rokuon-ji (Deer Garden Temple), is a designated National Special Historic Site and a National Special Landscape in Japan, and is one of 17 protected locations that make up the Historic Monuments of Ancient Kyoto UNESCO World Heritage Site.

According to the Kyoto City Archaeological Research Institute, the three fragments formed part of asōrin, the decorative vertical finial that stands at the top of a pagoda. The largest of the unearthed pieces is 37.4cm wide, 24.6cm long, and 1.5cm thick, weighing in at 8.2kg. Based on the size of the largest fragment, scholars estimate that the diameter of the kurin (nine tiered rings that make up the largest component of the sōrin) was about 2.4 meters. The fragments, which are partially covered in gold leaf, are thought to be from the decorated tip of the nine rings. 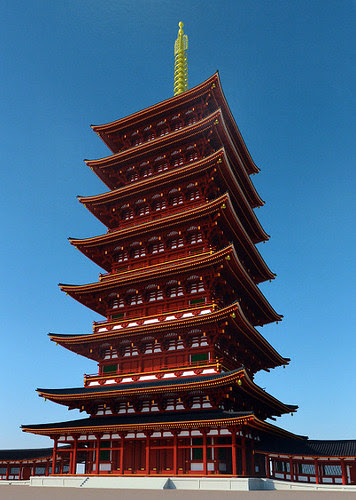 An artist’s impression of the seven-story pagoda built at
Shokoku-ji before the construction of Kitayama Daito.
From mainichi.jp

“The Kitayama Daito was believed to have been a huge pagoda equal to the seven-tiered pagoda at Shokoku-ji,” said Yoshiaki Maeda, deputy director of the Kyoto City Archaeological Research Institute. “It was twice as tall as the five-tiered pagoda at Tō-ji and there is the possibility it was the tallest Buddhist pagoda ever built in Japan.” (The Asahi Shimbun)

The shogun Yoshimitsu is thought to have begun work on Kitayama Daito in 1404 from his mountain home Kitayama-dono, which later became Kinkaku-ji, but he died four years later. The pagoda was believed to have been close to completion when it burned down after being struck by lightning in 1416. Before building Kitayama Daito, Yoshimitsu is said to have constructed an earlier seven-story pagoda in Kyoto in 1399, near another temple he commissioned, Shokoku-ji, some 110 meters tall. This pagoda also burned down after being struck by lightning in 1403, and Yoshimitsu subsequently decided to build Kitayama Daito at nearby Kitayama-dono.

The five-tiered pagoda at the Shingon temple Tō-ji, one of the most famous symbols of Kyoto, is the tallest existing wooden pagoda in Japan, standing 56m high. It dates from the Edo period (1603–1868), when it was rebuilt by order of the third Tokugawa shogun, Iemitsu. The size of recovered fragments suggests that the decorative rings at the top of Kitayama Daito dwarfed the 1.6-meter rings of the Tō-ji pagoda. 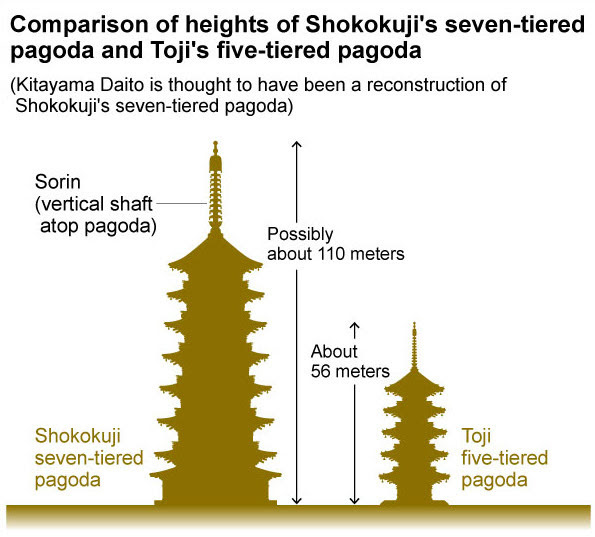 According to a document dated to the Muromachi period, the tallest known pagoda built in Japan was about 110 meters. Scholars say the newly discovered fragments suggest that Kitayama Daito was about the same size, however the remains of its foundations have yet to be located so the actual site of the pagoda is uncertain.

“Yoshimitsu, who boasted great authority and power, was taken with tall pagodas,” said Yoshiyuki Tomishima of Kyoto University Graduate School of Engineering, an associate professor of architectural history. “The recently discovered parts are thought to be from a large pagoda, but before we can say for sure that they are from Kitayama Daito we need to uncover information like where the tower was located.” (The Mainichi)

The bronze fragments have been placed on display in a special exhibition at Kyoto City Archaeological Museum until 27 November.