The Chinese Foreign Minister’s visit should be seen in the context of the Ukraine war, which has created differences in the top party leadership. Further, the economy of the Middle Kingdom is not doing well. 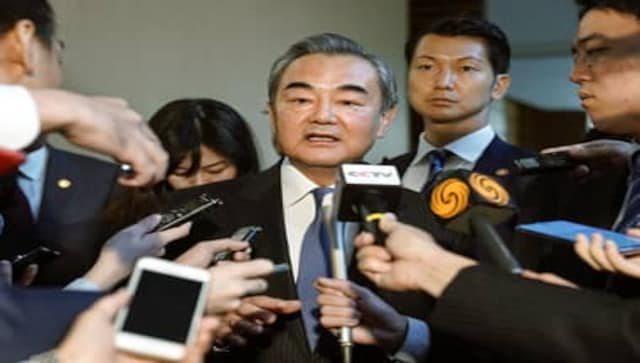 In recent months, several observers have compared the present political situation, including the crisis in Ukraine, to a new Cold War. This assumption seems wrong; the present state of world affairs is far more complicated than that.

Some of the most powerful nations of the planet may still use Cold War phraseology, like John Foster Dulles did in the 1950s: “If you are not with us, you are against”. But today, many nations, including India, have a more measured reaction, particularly after the unacceptable Russian invasion of Ukraine.

Many call India’s stance ‘neutral’; for example, noted commentator R Prasannan observed in The Week that Prime Minister Narendra Modi “stayed neutral in Russia’s war on Ukraine, aware that it is not at all ‘immoral’ to stay neutral when you are asked to choose between scoundrels. Rather, it is virtuous to be neutral.”

In this polarised context, it is interesting to watch China’s position, especially when Wang Yi, the Chinese Foreign Minister has just landed in Delhi with a ‘message’.

From the start, the West has been panicky about a new alliance between China and Russia. But so far, nothing is definite.

Early February, Vladimir Putin was the first Head of State received by Xi Jinping in two years. The Russian President ostensibly went to attend the opening of the Winter Olympics in Beijing. The encounter resulted in the 4 February Joint Statement which mentioned a ‘no limits’ partnership between China and Russia. That was, of course, before Putin sent his armies into Ukraine.

A flimsy marriage of convenience?

Since then, Beijing, through the declarations of its Foreign Minister Wang Yi, seems to have put ‘limits’ on its friendship with Moscow; it is certainly not an unconditioned friendship anymore.

War on the Rock, a platform for analysis and commentary on foreign policy and national security issues rightly calls China’s strategic assessment of Russia, ‘More Complicated Than You Think’.

Contributor Yun Sun mentioned the ‘seemingly enthusiastic joint statement’ issued after President Putin met his Chinese counterpart Xi Jinping in Beijing: “One could assume China would be supportive of Russia’s assault on Ukraine. The truth, however, is quite different.”

The author explained that the nature of the Sino-Russian relationship is not easy to define: “Is it as sturdy as an alliance? Or as flimsy as a marriage of convenience? The truth is the relationship is neither and both.”

Without giving a definitive answer to the question, the point remains that China’s position has been evolving fast during the past few weeks.

To have a clearer idea of what could happen with Wang Yi’s visit to Delhi, it is necessary to look at the two-hour virtual summit between US President Joe Biden and his Chinese counterpart Xi Jinping.

In his introduction, Xi noted that the international landscape has experienced major new developments and the prevailing trend of peace and development is facing serious challenges. He added: “The Ukraine crisis is not something we want to see.”

Xi argued that countries “should not come to the point of meeting on the battlefield. Conflict and confrontation are not in anyone’s interest, and peace and security are what the international community should treasure the most.”

A position far away from the ‘no limits’ friendship with Russia.

One commentator rightly wrote: “I think it’s quite clear that China has picked a side: China.”

So did India earlier, to the great displeasure of Western powers.

However, Xi used two Chinese sayings to put some blame on the West and defend Russia: “Let he who tied the bell on the tiger take it off” — which referred to the intransigence of the US (and Ukraine before the War) — and “It takes two hands to clap.”

The White House agreed that the video call between the two Presidents was constructive: “They directed their teams to promptly follow up and take concrete actions to put China-US relations back on the track of steady development, and make respective efforts for the proper settlement of the Ukraine crisis.”

This may take time, in the meantime, India has to find its place between extreme positions and while condemning the Russian armies’ entry into territory of Ukraine, Delhi needs to keep its own interests in view. Incidentally, the Russians are faring very poorly on the battlefield, something which has implications/lessons in case Beijing plans any misadventure in Taiwan.

In the meantime, Delhi witnesses a flurry of VIP visits, mostly to exhort the Modi Sarkar to side with Ukraine. The first was Japan’s newly appointed Prime Minister Fumio Kishida. At the invitation of Prime Minister Modi, Kishida spent two days in Delhi for the 14th India-Japan Annual Summit.

Then, a virtual meeting between Modi and Prime Minister of Australia Scott Morrison followed the first Virtual Summit of June 4, 2020 when the relationship was elevated to a Comprehensive Strategic Partnership.

That is not all, two important US officials — Victoria Nuland, under-secretary, and Donald Lu, assistant secretary — will be in Delhi for consultations ahead of the 2+2 dialogue in April (when the Israeli Prime Minister will pay his maiden visit to the capital).

One should not forget UK Foreign Secretary Liz Truss, expected to be in Delhi later this month.

In this context, it is interesting to watch the Chinese Foreign Minister’s visit to Delhi. It is crucial for the simple reason that India has an ongoing military confrontation with China (which has been ignored by the West).

On 11 March, the 15th round China-India Corps Commander Level Meeting was held at Chushul-Moldo border meeting point. According to a joint statement: “The two sides carried forward their discussions from the previous round held on 12th January 2022 for the resolution of the relevant issues along the LAC in the Western Sector. They had a detailed exchange of views in this regard, in keeping with the guidance provided by the State Leaders to work for the resolution of the remaining issues at the earliest.”

Both sides agreed to maintain the security and stability on the ground in the Western Sector in the interim and dialogue via military and diplomatic channels “to reach a mutually acceptable resolution of the remaining issues at the earliest.” This does not solve the issue.

Wang’s visit is also important for different reasons. Rumours have it that the Chinese Foreign Minister could bring a ‘gift’ to India. Remember, during the Spring of 2017, when the Chinese ambassador in India promised some ‘early harvest’ on the boundary, it was followed by the Doklam episode a couple of months later. Always beware of Chinese ‘gifts’!

On the boundary issue, there could be a disengagement offer at Depsang, Demchok and Hot Springs (though Beijing has already announced that it has withdrawn its troops from the latter place). In any case, it shouldn’t be called a ‘gift’ as it was the PLA that changed the status quo in the first place in May 2020.

More importantly, one has to realise that the Ukraine war has destabilised China and created differences in the top Party leadership. The Nikkei in Tokyo, wrote: “It is safe to assume that a diversity of opinion remains among China’s top leaders over Ukraine. It is even likely that some standing committee members are questioning whether it is wise to stick to the current position of siding with Putin.” It added: “Chinese netizens were vocal. One said what Russia is doing in Ukraine is equivalent to what Japan did in the northeastern part of China (in 1932 Japan created the puppet state of Manchukuo). Russia’s invasion is hardly a development Chinese people can support.”

Further, the economy of the Middle Kingdom is not doing well. Li Keqiang, the Premier, has been seen fire-fighting during the Twin Meetings earlier this month; Xi seems to have abandoned for the time some of his grandiose projects.

Finally, the 20th Congress is looming on the horizon; great changes will take place in the Central leadership. Xi has to watch his steps; he is reminded every day that China has very few friends. It is in these circumstances that Wang Yi will land in Delhi.

For India, there is only one thing to do — to keep its own interests in sight and design accordingly its own foreign policy. Friendship with China can wait.

The writer is a noted author, journalist, historian, Tibetologist and China expert. The views expressed are personal.