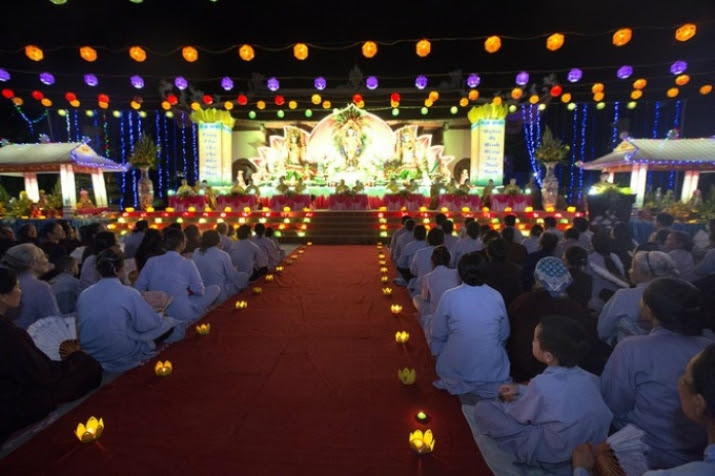 Buddhists across Vietnam observed the Vu Lan festival on 17 August. From e.vnexpress.net

Vietnam’s Buddhist community last week celebrated the annual Vu Lan festival to honor parents and ancestors. A time to remember the deceased as well as living parents and grandparents, the occasion is aalso a and a reminder to honor one’s parents for the good deeds they have performed on behalf of their children, and to remember one’s responsibilities as children. In the capital Hanoi, thousands of people flocked to Phuc Khanh Pagoda to mark the occasion in defiance of the rainy weather, filling the small pagoda and lining the surrounding streets.

Vu Lan is celebrated on the 15th day of the 7th month of the lunar calendar, which this year fell on 17 August. The festival is also known as Vietnamese Mother’s Day and Trung Nguyen, and is also believed to be the day on which lost souls search for mercy and return to their former homes. The second-largest festival in the Vietnamese calendar after Tết Nguyên Đán, the Vietnamese New Year, Vu Lan is celebrated throughout the country. In addition to visiting temples and making offerings to monks, people engage in compassionate activities such as releasing birds and fish back into the wild, and offering gifts and flowers to their parents as an expression of appreciation and gratitude. 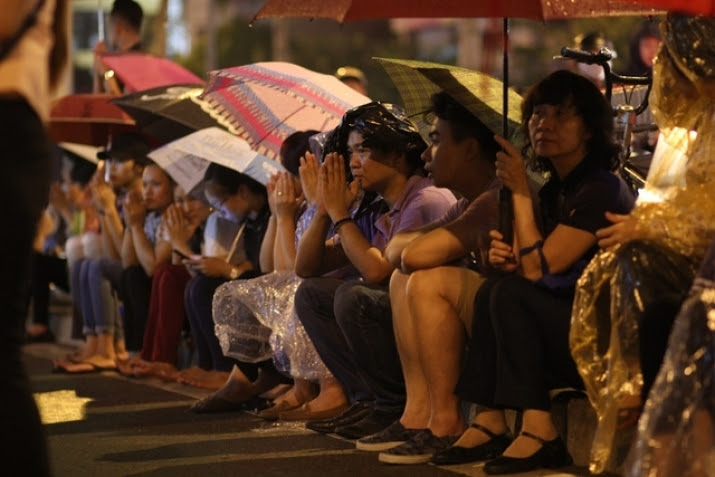 In Hanoi, thousands of people defied rainy weather by flocking to Phuc Khanh Pagoda to mark the occasion. From vietnamnet.vn

Vu Lan is the Vietnamese version of the Chinese Zhong Yuan Jie or Yu Lan Jie festival, which is celebrated in the same month of the lunar calendar. The festival’s Sanskrit name, Ullambana originates in the Mahayana Ullambana Sutra, which consists of a discourse by Shakyamuni Buddha to Maudgalyayana, one of his two chief disciples, about saving his mother from suffering after death. According to the story related in the sutra, Maudgalyayana had a vision in which he saw his mother reborn as a hungry ghost due to her evil actions while alive. The Buddha advised Maudgalyayana to organize an assembly of monks to make offerings for the benefit of his deceased mother. The festival is widely observed in many countries in which Mahayana Buddhism is practiced. In addition to honoring one’s parents and ancestors, the main purpose of the festival is to make offerings to the sangha and to pray for the liberation of the deceased who have been reborn into undesirable states.

Observance of the festival also extended to the Vietnamese Buddhist community in the United States—including at Chua Giac Hoa Temple in Amarillo, Texas. Venerable Thich Tin Nghia from Dallas led the celebrations on 14 August, which included a two-hour prayer session. “We are praying for parents still alive and great, great grandparents passed away,” the Buddhist monk said. (Amarillo Globe-News) 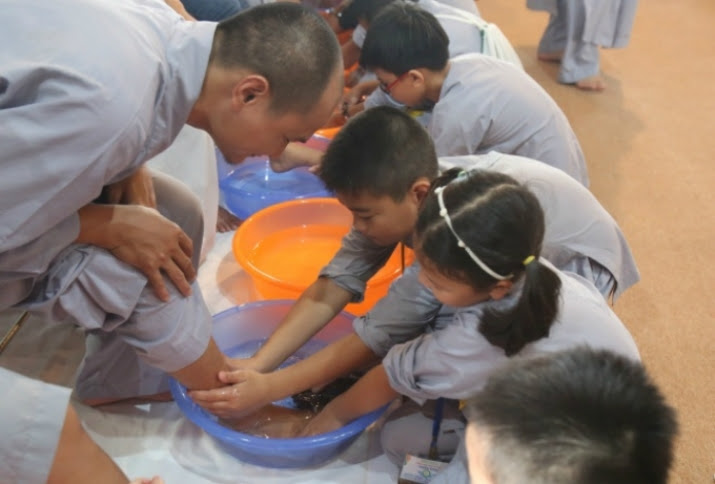 Children participate in a feet-washing ceremony as a part of the observances for Vu Lan. From e.vnexpress.net

Phuong Tao, treasurer for the temple, noted that people were particularly grateful to the Ven. Nghia for leading the ceremony as there are no Vietnamese monks in Amarillo. “He is our religious advisor, so for festivals and activities he is here to help us . . . to make sure we do everything right,” she observed. (Amarillo Globe-News) While the Westerners have Mother’s Day and Father’s Day to be proud of, Vietnamese treasure their seventh lunar month festival in general and the Vu Lan day in particular as a time to show gratitude to their parents and to practice Compassion and Charitable Giving, two of the most revered virtues in Buddhism.