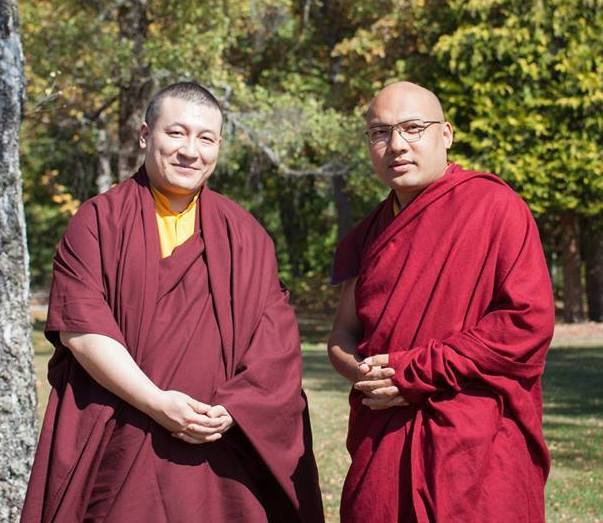 This 2018 photo shows the two Karmapas, Trinley Thaye Dorjee, left, and
Ogyen Trinley Dorje, right, at their meeting in France. From phayul.com

Ogyen Trinley Dorje and Trinley Thaye Dorjee, the two widely recognized claimants of the title of Karmapa, the most important reincarnation line in the Karma Kagyu lineage of Tibetan Buddhism, have announced plans to jointly identify the reincarnation of the 14th Sharmapa, Mipham Chokyi Lidro, who passed away in Germany on 11 June 2014. The announcement is aimed at helping to solidify the unity between the two leaders, who have been at the heart of a controversy concerning who is the rightful 17th Karmapa.

“It is extremely important that Shamar Rinpoche’s reincarnation be recognized without any mistake or confusion, without any “our side” or “their side.” Having a unanimous recognition is absolutely crucial for Buddhism in general and our lineage in particular, and with this in mind, Gyalwa Thaye Dorje and I intend to cooperate in the search and recognition,” Ogyen Trinley Dorjee said on Sunday at the 37th Kagyu Monlam in Bodh Gaya, India. (Phayul)

He continued: “I see the reincarnation of Shamar Rinpoche as a crucial point for bringing unity to the Kamtsang and am putting effort into it. If the reincarnation of Shamar Rinpoche is disputed, in the future all the Kamtsang high lamas will be disputed and the Kamtsang will be completely split. The attachment and hatred will be the same as in a feud that lasts for generations. If we fall under its power, all the majesty and power of over 900 years of history will be destroyed.” (Phayul)

Kamtsang refers to the lineage of the Karmapas and, by extension, their followers.

The announcement represents a further step to overcome the decades-long division within the Karma Kagyu lineage. The last move was in 2018, when the two Karmapas met for four days in rural France and issued a joint statement declaring a wish to develop a lasting personal connection to heal rifts within the community.* Shamar Rinpoche, also known as the Shamarpa, is another influential lineage of reincarnated lamas in the Kagyu tradition, dating to Drakpa Senge (1283–1349), who was a student of the third Karmapa. Historically, the two lineages have held close ties and the Karmapas and Sharmapas have often acted as alternating teachers and disciples.

The Karmapa is the head of the Karma Kagyu subsect of the Kagyu lineage, one of the four major schools of Tibetan Buddhism. The other main schools are Gelug, Nyingma, and Sakya. The institution of the Karmapa is the oldest tulku lineage in Tibetan Buddhism, beginning with the first Gyalwa Karmapa, Düsum Khyenpa (1110–93). The lineage predates that of the the Dalai Lamas by more than two centuries. The majority of Tibetan Buddhists recognize Ogyen Trinley Dorje as the 17th Karmapa, while an influential minority recognizes Trinley Thaye Dorje.