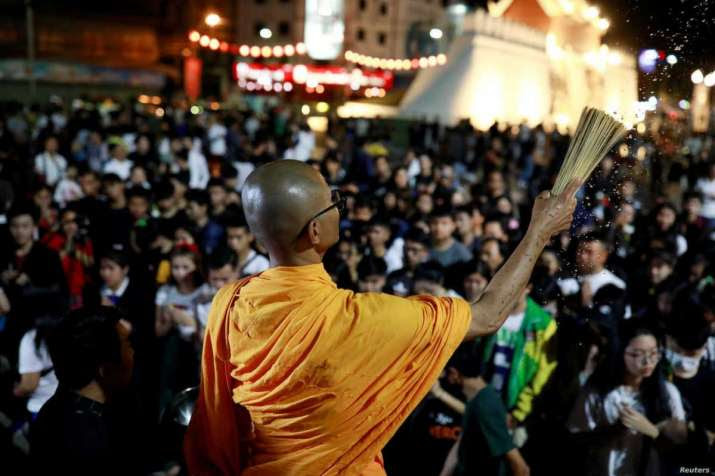 A buddhist monk sprinkles holy water on Sunday as people pray for victims of the mass shooting in Nakhon Ratchasima, Thailand. From voanews.com
The official religion in Thailand is Theravada Buddhism, practiced by more than 95% of the population and by many who reside in Laos, Myanmar, and Cambodia. Small tokens of this religion are seen in the most inconspicuous of places around the country.

Buddhist monks in Thailand led a prayer vigil on Sunday evening for the victims of the deadly mass shooting tragedy that took place over the weekend in the northeastern city of Nakhon Ratchasima. Thousands of mourners gathered, holding flickering candles under the full moon and offering flowers as the monks chanted in Pali for the victims of the worst mass shooting in Thailand’s history,* which has claimed the lives of 30 people and left 58 injured.

In an ordeal that lasted for more than 16 hours on a weekend that was intended to mark the joyful Makha Bucha Buddhist holiday, a Thai soldier, reportedly enraged over a financial dispute involving a senior officer, went on a deadly shooting rampage in Nakhon Ratchasima that began at an army base and ended at a major shopping mall in the provincial capital.

Nakhon Ratchasima, commonly shortened to Korat, is the capital city of Nakhon Ratchasima Province (also known as Korat) and the third most populous municipality in Thailand, with around 170,000 people. Historically marking the boundary between Lao and Siamese territory, the modern city, some 250 kilometers from Bangkok, is a commercial hub for Thailand’s largely agricultural northeast and a gateway to the relatively poor and rural Isaan region, which shares borders with Laos and Cambodia.

The carnage began at around 15:30 local time on Saturday, when the solder, identified as 32-year-old Sgt. Maj. Jakrapanth Thomma, shot and killed his commanding officer, the officer’s mother-in-law, and another soldier at Surathamphithak Military Camp. The assailant then stole two assault rifles, a machine gun, ammunition, and a military vehicle, and fled the scene. En route from the army base, the soldier fired at people in the street, stopping at Wat Pa Sattha Ruam, a Buddhist monastery, where he killed nine people including two police officers, according to witnesses.

The assailant then drove to the crowded Terminal 21 Korat, a seven-floor airport-themed shopping mall, which was particularly busy with shoppers enjoying the long-weekend holiday being observed for Makha Bucha Day, celebrating the Buddha’s first gathering of 1,250 disciples, the beginning of the sangha of Buddhist practitioners.

Arriving at Terminal 21 Korat, Jakrapanth left his vehicle and opened fire indiscriminately on people outside and later inside the mall. Over the course of the events, the assailant posted updates and shared a livestream via Facebook. A 13-hour overnight standoff at Terminal 21 Korat involving hundreds of security personnel ended in a shootout with the gunman before Thai security forces announced at 09:13 local time on Sunday that they had shot and killed Jakrapanth, bringing an end to Thailand’s most lethal mass shooting carried out by a single gunman.

Buddhist nun Amornrat Putta-ariyawong said she was washing dishes in preparation for Makha Bucha Day activities at Wat Pa Sattha Ruam on Saturday when the vehicle commandeered by Jakrapanth pulled up inside the temple gates and he began firing toward the road. “When the first round of shots was fired, we were all still going about our usual business. The monks were sweeping and I was washing dishes and talking to a dog,” Amornrat told Reuters on Sunday. “Anybody, any vehicle within his eyesight, he’d shoot them all,” she said. (Reuters) Buddhist nun Amornrat Putta-ariyawong at Wat Pa Sattharuam in Nakhon Ratchasima on Sunday, where nine people were killed. From bangkokpost.com

A monk at the monastery, Luang Phi Kla, said he was sweeping the road in front of the temple on Saturday afternoon when he heard the gunshots, and recalled seeing the soldier fire at a student on a motorcycle. “The shooter still went over and shot the student in the head, even though he already fired many bullets,” he said. (Reuters)

Jakrapanth then shot out the tires of a nearby car with five people inside. “He then went back to his vehicle, picked a new gun, and went over to open the car doors and shot them one by one,” Luang Phi Kla recalled. Four of the five passengers reportedly died.  (Reuters)

“I never dreamed this would happen in a temple, in our country,” said the monk. “It’s like he didn’t see the value of other people’s lives, just shooting at them like they were vegetables or fish,” he said. “He didn’t even spare a child.” (Reuters)

Late on Sunday, flowers and notes of condolence were being laid in front of Terminal 21 Korat as local residence sought to express their shock and sorrow at the tragedy. Throngs of people assembled in Nakhon Ratchasima’s main square yesterday evening to commemorate the victims of the 16-hour nightmare that has shocked the city and the nation. “It just happened right here in our hometown behind us, like right in our heart of everything. It’s just tragic,” said local resident Chirathip Kurapakorn. (DW)

Also attending the vigil on Sunday, 13-year-old Lapasrada Khumpeepong said she and her mother had been hidden inside a bathroom in the mall for five hours before being able to escape the shooting. “Thank you to those who sacrificed themselves to keep others alive,” She wrote on a condolence board. “Without you, we would not be here today.” (BBC News) Thousands light candles and pray for those killed in the shooting rampage. Photo by Prasit Tangprasert. From bangkokpost.com

Thailand has one of the highest rates of gun ownership in the world, and although violent crime is relatively common in the kingdom, mass shootings are rare. The incident comes just a month after a masked gunman used a handgun to rob a jewelry store in the central city of Lopburi, killing three people, including a two-year-old boy, and wounding four others.

Thailand is a predominantly Theravada Buddhist country, with 94.5 per cent of the nation’s population of 69 million identifying as Buddhists, according to government census data for 2015. The Southeast Asian kingdom has some 40,000 Buddhist temples and almost 300,000 monks.