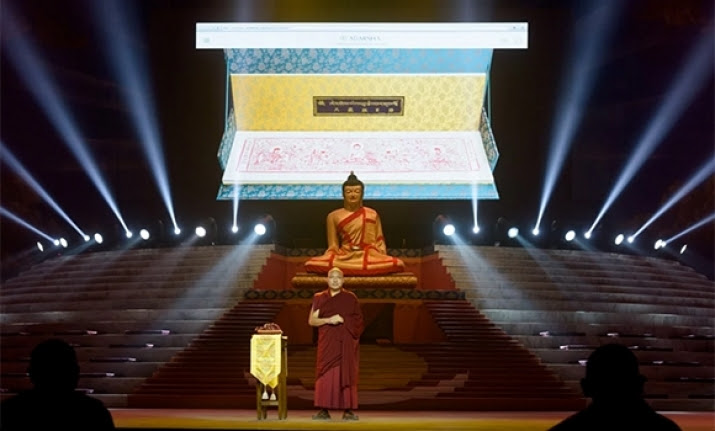 His Holiness the Karmapa announced new progress on the Adarsha project. From kagyuoffice.org

His Holiness the 17th Gyalwang Karmapa, Ogyen Trinley Dorje, announced the latest progress in a three-year initiative to digitally preserve a wide range of Tibetan Buddhist texts, mainly focusing on the Jiang Kangyur (the translated words of the Buddha) and the Tengyur (the translated commentaries on the teachings).

As the first event of the Marmei Monlam festival held in Bodh Gaya, the Karmapa officially launched the initial version of the website and app Adarsha, a Sanskrit word meaning “clear mirror.” “I would like to introduce to you the project we have been working on to digitize the Jiang Kangyur,” His Holiness announced. “This endeavor has been given the name Adarsha, which means ‘mirror’ in English. The reason for the name is that in the future, we would like it to become a program that allows everyone to view and read not just the words of the Buddha, but also of the great Indian scholars of the past and all of the scriptures in Tibetan.

“Adarsha’s home page opens to [a brocade-covered box holding the Karmapa’s edition of the Jiang Kangyur] . . . If you click on the dark line above the image, three different sections will appear: the Kangyur, the Tengyur, and texts by Tibetan scholars. For the Kangyur tab, all the sections have been input; the Tengyur has just one for now; and the works by Tibetan scholars has just one, but in the future, we hope to include them all.

“All of this is available on the website, and for those who do not have Internet access, the program is also available on a USB. . . . The app is now available through the Apple Store. After it is downloaded, the screen looks like this [opening screen displayed]. The internal structure is the same as the website so you can read the entire Kangyur.

“Digitizing the Kangyur and putting it on the Internet is a way of bringing the Buddha’s teachings into the 21st century, so that these precious texts will not just sit on our shrines, but will be read, studied, and researched, allowing our intelligence, faith, and devotion to develop.” (Karmapa)

Most of the work on the project has been carried out by Nitartha International in Seattle, Washington, as well as at Lekshey Ling Shedra in Kathmandu. The texts were checked and rechecked over the three years by representatives of the Karma Kagyu shedras (monastic colleges), while the master woodblock prints were scanned without any changes. Software development and the sizing and cleaning of the texts took place in Taiwan.