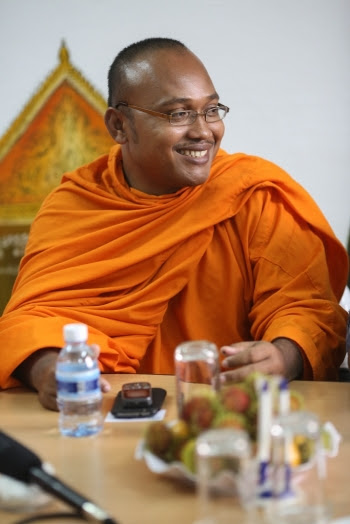 International Buddhist Confederation’s (IBC) governing council meeting in Thailand last week heard two speeches from a Buddhist monk from Phnom Penh calling for the preservation of Cambodia’s forests. Ven. But Butenh, who is the leader of the Cambodian group Independent Monk Network for Social Justice and an executive director for the organization Buddhism for Peace, gave talks on 2 and 3 March detailing his ecological activism in the country.

Held in Ayutthaya, the meeting was the second for the IBC’s governing council since its founding in 2012. Ani News reported that delegates came from 320 organizations in 39 countries, including Mexico, the UK, China, Jamaica, and Bhutan.

“Land is the life, forest is the backbone of our life. If we lost the land, we lost the life. We lost the forest, we lost our backbone. No one can live without backbone. Backbone is very important so I use this . . . simple message to attract . . . those young people [Cambodian youth on social media]. That is why they joined me freely,” he said. (Ani News) He further appealed to the delegates to lend him moral support, advising that the deployment of social media and public relations was critical to the IBC’s long-term objectives.

Ven. But Butenh is a prominent figure in circles criticizing Prime Minister Hun Sen’s apparent indifference to environmental preservation and policies of selling off land to multinational companies. Particular to his concerns are the government’s sales of arable land to corporations in areas near the Mekong River, which itself is being dammed to be harnessed for electric power. Over the past few years, the Cambodian monk has led other monks to protest with local villagers and indigenous tribes, including in the Areng Valley in November 2013, as reported in Luc Forsyth’s photojournalism blog, and in Prey Lang Forest in June 2015, as reported by the Khmer Times.

Ven. But Butenh has enjoyed international exposure before, including in a 2014 video made for The New York Times, which he screened to the IBC’s governing council on 3 March. In the video, Cambodian-American filmmaker Kalyanee Nam documented the monk’s ongoing campaign alongside the Chong indigenous people to stop the construction of a network of dams that would almost certainly require the displacement of the Chong from the Areng Valley, citing deforestation, loss of biodiversity, the loss of indigenous people’s traditional homes and livelihoods, and economic and land concessions to foreign corporations as his reasons for becoming politically involved.

Several prominent figures within the IBC affirmed that protecting the environment and other activities promoting social and ecological responsibility would be operational priorities. Jamie Creswell, vice-president of the IBC’s governing council, told Ani News: “We believe that Buddhism can help in many of those situations [conflicts around the world and global issues]. For example, we’re already very involved in the environmental issues, climate change, looking after animals properly, all the various things that goes along with environmental issues. And also, we’re getting more and more involved in issues like gender issues and human rights, but also conflict problems.”