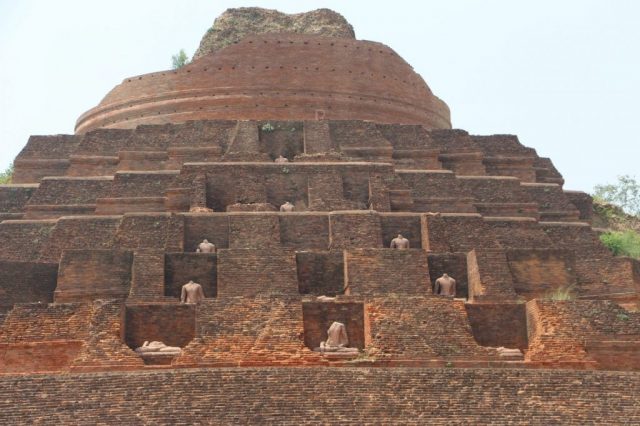 Kasariya Stupa at Bihar, where the Buddha is believed to have expounded the Kalama Sutta.
From unexploredvihar.blogspot.com
By   —  Shyamal Sinha
Buddha lived much of his life in Magadh. Therefore, as Buddha’s karma bhumi, present day Bihar state of India is the land of Buddhist world. It is most sacred place for Buddhists and Hindus (who consider him to be the ninth reincarnation) worldwide and the pinnacle of ”ancient wisdom and civilisational achievements” to be proud of for the people of Bihar and India.

The Kalama Sutta is part of the Anguttara Nikaya of the Sutta Pitaka. The Buddha expounded this sutta to a group of people known as the Kalamas. To this day, it is interpreted as a pro-skeptic, pro-rationalist text. In this sutta is a famous passage in which the Buddha argues for a rigorous questioning of religious teachings. Because of this celebrated passage, the text as a whole has been interpreted as advocating the rejection of anything that contradicts rational thought or empirical understanding, even the Buddhist teachings. Or, reframed, anything that is unseen and that cannot be empirically verified is incompatible with the Buddha’s free thinking. Therefore, teachings of the afterlife or karma are superstitious baggage that go against the “original spirit” of the Buddha’s inquiring mind.

What the Buddha said

The Kalamas were themselves not skeptics because they lacked the knowledge to determine the veracity of a teaching. Rather, they were beset by uncertainty and confusion after encountering diverse and contradictory teachings from various gurus, brahmins, and yogis. When the Buddha and his disciples arrived in the city of Kesaputta, the Kalamas approached the Buddha and expressed doubts about his teaching. The Buddha said to them: “It is fitting for you to be perplexed, Kālāmas, fitting for you to be in doubt. Doubt has arisen in you about a perplexing matter.” (Bodhi 2012, p. 280) He then offered his famous instructions to the Kalamas about skepticism, arguing:

“Come, Kālāmas, do not go by oral tradition, by lineage of teaching, by hearsay, by a collection of scriptures, by logical reasoning, by inferential reasoning, by reasoned cogitation, by the acceptance of a view after pondering it, by the seeming competence of a speaker, or because you think: ‘The ascetic is our guru.’ But when you know for yourselves: ‘These things are wholesome; these things are blameless; these things are praised by the wise; these things, if accepted and undertaken, lead to welfare and happiness,’ then you should live in accordance with them.”

With these 10 points, the Buddha urged the Kalamas to test truth and untruth based on their own opinions. This has been interpreted, particularly in the early days of Buddhism in the West, as a rationalist, empiricist celebration of free thought. The problem with this interpretation is that the Buddha did not conclude his sermon on this point. The Buddha further noted that it is an open and free inquiry into the nature of the world that leads to the Buddhist Noble Eightfold Path, and the relinquishment of greed, hatred, and delusion.

The rationalist interpretation cherry picks from the first half of the Kalama Sutta, leaving the Kalamas narratively suspended in uncertainty and confusion. However, in the second half of the text, the Buddha provides assurance of the truth, the Dhamma. The Buddha’s unveiling to the Kalamas of the Noble Eightfold Path is the conclusion of the sutta. In a correct exegesis, the Buddha’s 10 points of skepticism are aimed directly at those who doubt his teaching. This is quite a different conclusion to the pro-agnostic, pro-skeptical position advocated by rationalists.

From uncertainty to assurance

Building on the idea of an open mindset of evaluating truth, the Buddha made a case that one must expunge ill-will and confusion, and cultivate a mind that is undefiled and pure. Once this is accomplished, four assurances arise:

“This noble disciple, Kālāmas, whose mind is in this way without enmity, without ill will, undefiled, and pure, has won four assurances in this very life.

“The first assurance he has won is this: ‘If there is another world, and if there is the fruit and result of good and bad deeds, it is possible that with the breakup of the body, after death, I will be reborn in a good destination, in a heavenly world.’

“The second assurance he has won is this: ‘If there is no other world, and there is no fruit and result of good and bad deeds, still right here, in this very life, I maintain myself in happiness, without enmity and ill will, free of trouble.

“The third assurance he has won is this: ‘Suppose evil comes to one who does evil. Then, when I have no evil intentions toward anyone, how can suffering afflict me, since I do no evil deed?’

“The fourth assurance he has won is this: ‘Suppose evil does not come to one who does evil. Then right here I see myself purified in both respects.’”

Following the Buddha’s exhortation, the Kalamas committed to seek refuge in the Buddha, the Dhamma, and the Sangha, eventually becoming devotees of the Buddha.

The Buddha did not merely encourage free inquiry as an end in itself. Free thinking is the means or method by which one’s welfare is achieved. The Buddha says that the highest, most lasting path to welfare is the relinquishment of greed, hatred, and delusion. The Buddha identifies greed, hatred, and delusion as the root cause of suffering, and the decisive overcoming of these existential ills is the realization of the Four Noble Truths and the practice of the Noble Eightfold Path.

The rationalist paradigm has dominated academic and broader globalized discourse for decades. Even the Buddhist tradition, particularly in the West after World War Two, partially conceded epistemic understanding to the scientific, empiricist worldview. Both Buddhists and rationalists have cited the Kalama Sutta as legitimizing the rationalist paradigm as an authentically Buddhist position. However, they only refer to the initial portion of the sutta, in which the Buddha states his 10 points of skepticism, while ignoring the rest. Rationalist advocates further argue that in this text, the Buddha did not say anything about an afterlife, and therefore the afterlife, at worst, does not exist, and at best, is a later superstitious accretion that can be dismissed as not belonging to “original Buddhism.”

We now know that this understanding of early Buddhism is itself a bias shaped by scientism and Protestant-inspired prejudices that date back to early clashes between what early European and American Buddhologists saw as “Buddhist superstition” versus “true Buddhism.” The Buddha, in fact, spoke extensively not only on the subject of the afterlife, but also on rebirth, kamma, and a transcendent, unseen reality. Empiricism is only one aspect of the story—not the whole.

Here, I hope to provide a more rigorous exegesis of the Kalama Sutta, and respond to the rationalist claim that the Kalama Sutta advocates a skeptical approach to all things: it qualitatively does not, and, in fact, the text argues precisely that a free and open mind will lead one to acceptance of the Buddhadhamma.