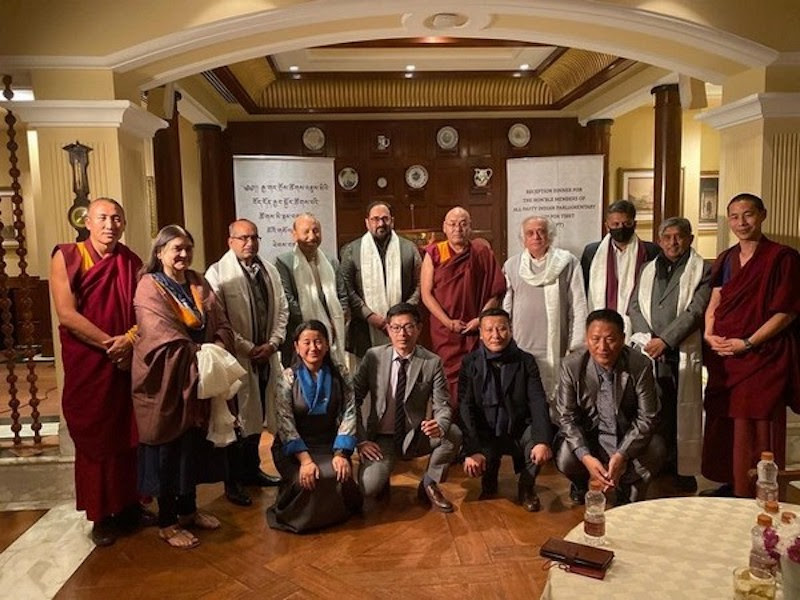 The Chinese embassy in New Delhi has sent an official letter of ‘concern’ to the Indian parliamentarians for their public association with representatives of the 17th Tibetan Parliament-in-Exile on Dec. 22. This “unusually worded letter”, as opined by media outlets, has garnered strong reaction from the Indian politicians on Friday. The reception held by representatives of TPiE hosted at least six members of the Indian parliament cutting across party lines to advocate for the Tibetan movement.

The Political Counsellor Zhou Yongsheng of the embassy wrote addressing the Indian leaders, “You are a senior politician who knows the China-India relations well. It is hoped that you could understand the sensitivity of the issue and refrain from providing support to the ‘Tibetan independence’ forces, and make contributions to China-India bilateral relations.” By citing India’s One China policy, Zhou added that the CCP firmly opposes any anti-China separatist activities and urged the Indian government to refrain from interacting with members from “so-called Tibetan government-in-exile”.

“Tibetan Government in-exile” is an out-and-out separatist political group and an illegal organization completely in violation of China’s Constitution and laws. It is not recognised by any country in the world.”

Sixty years ago, around 80,000 Tibetans, along with their spiritual leader the Dalai Lama, left Lhasa after a failed uprising against the Communist rule and arrived in India.

The Tibetan exile administration, called CTA, is based in Dharamshala where the spiritual leader also lives. Around 140,000 Tibetans now live in exile, over 100,000 of them in different parts of India. Over six million Tibetans live in Tibet.

Congress leader Jairam Ramesh said, “When I was asked to speak (at the event), I said I never go to any evening functions but I have made an exception because of my profound admiration for the Buddha, deep respect for the Dalai Lama and in gratitude for the role Tibetan sources have played in the rediscovery of India’s Buddhist heritage.”

India has supported and sheltered Tibetan refugees and leaders, including His Holiness the Dalai Lama, for decades. But, also recognises Tibetan Autonomous Region as an integral part of India.

Four years ago, the Indian administration had taken a decision to downplay the celebrations to mark 60 years in exile of the Dalai Lama, moving the event from Delhi to Dharamsala and cancelling another one.

CTA spokesperson from DIIR, Tenzin Lekshay responded to the content of the letter sent by the Chinese embassy, “[In the letter] they said that the Central Tibetan Administration is an illegal entity, which is not true. We’ve had our round of several negotiations with Chinese leaders. And we are not a separatist group either; our policy is the Middle Way Approach, which is not about separation, but about fulfilling the aspirations of the people within the framework of the Chinese constitution. This is something we need to be very clear about.”

The new convener of the APIPFT, Sujeet Kumar told the reporters after the development, “I personally treat the letter with the contempt it deserves. It is not the first time the embassy has written to me, it has written to me several times. The embassy does not have any locus standi to write to an Indian parliamentarian. If it had any issue, it could have written to the Ministry of External Affairs. It has violated the protocol.”

However, the Biju Janata Dal party member Kumar also said that it was not a political engagement with the Tibetan MPs, but rather aimed at promoting cultural and trade ties. “We have not met the Tibetan government-in-exile on behalf of the Ministry of External Affairs or the Indian government. . . Our meeting was aimed at promoting cultural and trade ties between India and Tibet,” he further clarified.

Another forum member, MP Manish Tewari said that he hadn’t received any letter, “Neither have I received any letter nor will I demean or diminish myself by responding to such imbecile missives. Had [Chinese Foreign Minister] Wang Yi written, perhaps I would have considered responding.” The All-Party Indian Parliamentary forum for Tibet, formerly established in 1970, was revived through lobbying with several Indian politicians last week.

Reminding India that the Tibet Autonomous Region is part of the territory of the People’s Republic of China, Political Counsellor Zhou Yongsheng reiterated that China “does not allow Tibetans to carry out anti-China political activities. China firmly opposes any anti-China separatist activities conducted by ‘Tibetan independence’ forces in any capacity or name in any country and opposes any forms of contact by officials of any country with them.”