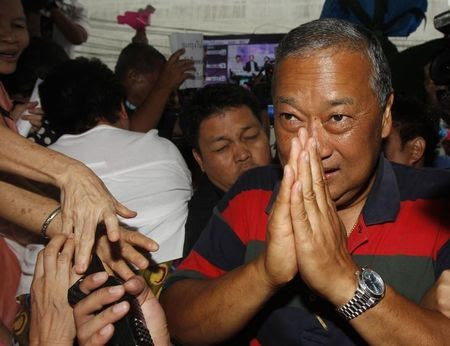 BANGKOK (Reuters) – Thailand’s military government suspended the governor of Bangkok, the country’s most senior elected official, on Thursday while the country’s attorney general investigates allegations of corruption and misuse of city funds.

The order suspending Sukhumbhand Paribatra, a member of the royal family and a former deputy foreign minister, was signed by junta chief Prayuth Chan-ocha and published in the Royal Gazette.

The governor’s office is facing several investigations for possible misuse of city funds, including a New Year light show in 2015 which cost 39.5 million baht ($1.14 million).

Sukhumbhand denies the allegations against him.

“If the investigation finds no evidence of wrongdoing, the accused will be reinstated,” said Colonel Taksada Sangchan, deputy spokeswoman at the Prime Minister’s Office.

The order to suspend Sukhumbhand came hours after he left Bangkok for South Korea’s capital Seoul on Thursday, where he was due to take part in celebrations cementing the friendship between the two cities.

A military coup that ousted a civilian government in May 2014 left Sukhumbhand as the highest-ranked elected official in Thailand.

Since his re-election in 2013, Sukhumbhand has been criticized by political opponents and the ruling junta for failing to address longstanding problems in Bangkok including traffic congestion and flooding.

Sukhumbhand, a member of Democrat Party, Thailand’s oldest political party, had been also criticized for failing to work with then-Prime Minister Yingluck Shinawatra during floods in 2011 that devastated the country and killed more than 900 people.