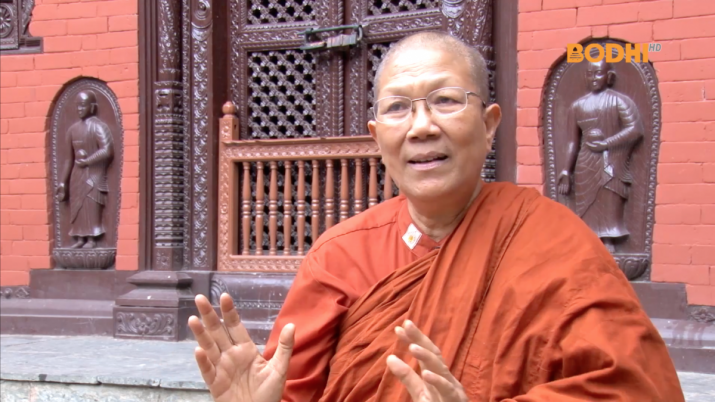 Dhammananda Bhikkhuni. From youtube.com
Thai bhikkhuni (“Buddhist nun”). On 28 February 2003,Kabilsingh received full monastic ordination as a bhikkhuni of the Theravada tradition in Sri Lanka. She is Abbess of Songdhammakalyani Monastery, the only temple in Thailand where there are bhikkhunis.Chatsumarn received a higher education. After high school, she received her B.A. in Philosophy from Visva Bharati University, her M.A. in Religion from McMaster University in Canada, and her Ph.D. in Buddhism from Magadh University in India.She currently resides at the Songdhammakalyani Monastery in the Muang District, Nakhonpathom province, Thailand. Since her ordination, Dhammananda has written more than 100 books, designed to educate the public about various issues related to Thai Buddhism, including the place of women.

The BBC has named Dhammananda Bhikkhuni, Thailand’s first female monk, among its list of the world’s 100 most inspiring and influential women of 2019, which draws on the achievements and accomplishments of influential and notable women from across the globe.

Thailand is a predominantly Buddhist country, with 94.5 per cent of the nation’s population of 69 million people identifying as Buddhists, according to government data for 2015. The Southeast Asian kingdom has some 40,000 Buddhist temples and almost 300,000 monks. However, the country has never officially recognized the full monastic ordination of women, and bhikkhunis do not generally enjoy the same level of societal acceptance as their male counterparts. By comparison, the Mahayana Buddhist traditions widely practiced in East Asia have historically been much more accepting of female ordination.

Yet communities of ordained female renunciants do exist and are growing across Thailand, committed to overturning the institutionalized chauvinism that stands in the way of female monasticism. Now numbering around 270 nationwide, and supported by more progressively minded bhikkhus, they seek to re-establish the fourfold sangha as the optimal holistic and inclusive structure in which all segments of society can study and share the Dharma.*

Ven. Dhammananda ordained in Sri Lanka in 2003, becoming Thailand’s first bhikkhuni in the face of considerable public opposition. Formerly known as Chatsumarn Kabilsingh, an author and professor of religious studies and philosophy at a prominent Thai university, and now the abbess of Songdhammakalyani Monastery, the country’s first all-female Buddhist monastery, she states her case simply and with a gentle logic, noting that the Buddha himself founded the bhikkhuni order, which included his own adoptive mother.

“It’s been 90 years and the social context has changed, but they still don’t accept us,” said Ven. Dhammananda. “It’s a shame that women aren’t allowed to make decisions for their own lives. You have to rebel against injustice because this is not right.” (Reuters) The 100 women of note identified by the BBC were selected from a pool of candidates who made headlines or influenced important news reports over the past 12 months, or those with significant achievements or influence in their societies.

Other notable women on the list are: Swedish environmental activist Greta Thunberg; Purity Wako of Uganda, who is empowering Ugandan women and calling for all women to have legal rights in marriage; Parveena Ahanger, the “Iron lady of Kashmir,” whose son disappeared in 1990, during an uprising against Indian rule, leading Parveena to set up the Association of Parents of Disappeared Persons (APDP); Dr. Alanoud Alsharekh, founding member of the Abolish 153 campaign, calling for Kuwait’s “honor-killing” law to be scrapped and working to improve gender equality in the Middle East; Owl Fisher, aka Ugla Stefanía Kristjönudóttir Jónsdóttir, an Icelandic journalist, writer, and transgender campaigner; and forensic psychology professor Soo Jung Lee, who has worked on numerous high-profile murder cases in South Korea and has challenged the legal system to introduce an anti-stalking bill to protect vulnerable women.

Nantawan Boonprasat-Lewis comments “Kabilsingh thus advocates for the Sangha to be more involved in providing spiritual guidance to the laity and deal with their own fear of having women be equal to men. The social crisis, she says, is greater than this fear and needs the cooperation and involvement of all, regardless of gender, class, and ethnicity.

In 2014, Dhammananda Bhikkhuni was appointed as Pavattini by a Sri Lankan preceptor during a group ordination for women monks in Songkhla, Thailand.