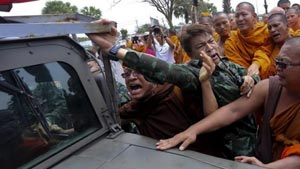 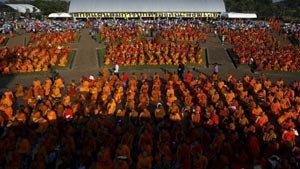 Thai monks scuffle with a soldier during a rally against state interference in religious affairs on the outskirts of Bangkok. From reuters.com

The Buddhist monks scuffled  with soldiers as over a thousand monastics and their supporters gathered at a rally on the outskirts of Bangkok in a show of support for the front-runner for the post of supreme patriarch, the head of Thailand’s monastic sangha, and to protest what they see as government interference in religious affairs.

Tempers flared briefly at the otherwise peaceful gathering at Phutthamonthon Buddhist Park in Nakhon Pathom Province as monks shoved and grappled with soldiers who had barricaded the entrance to the park to prevent vehicles from entering. While no injuries were reported, the clashes mirror the political rift in Thailand over who should be appointed as Thailand’s most senior monk—a post that carries the official title of Somdet Phra Sangharaja Sakalamahasanghaparinayaka.

The front-runner among the eight potential nominees is acting supreme patriarch Somdet Phra Maha Ratchamangalacharn, also known as Somdet Chuang, the 90-year-old abbot of Wat Pak Nam Phasi Charoen. However, vocal critics have expressed doubt over his suitability for the role. He has been accused of violating monastic rules and of having close ties with the abbot of Wat Dhammakaya, the temple at the center of the controversial Dhammakaya Buddhist movement, which is reportedly backed by a number of powerful public figures—including the family of ousted prime minister Thaksin Shinawatra—and has been hounded by allegations of involvement in fraud, embezzlement, and corruption.

A group calling itself the Sangha and Buddhists Alliance of Thailand (SBAT), comprising some 1,200 monks and supporters, gathered at the park to demand the immediate appointment of Somdet Chuang. Among the protesters, Phra Methee Dhammacharn, secretary-general of the Buddhism Protection Center, gave voice to the defiant sentiment of the rally. “We will not move until the state stops interfering in religious affairs,” he said. (Reuters) 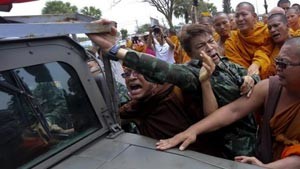 Monks and their supporters gather to voice their demands to the government. From reuters.com

Last month, Thai prime minister General Prayut Chan-o-cha insisted that he would not forward the name of any candidate for royal endorsement by Thailand’s king until disputes over the nomination were settled.

Phra Methee Dhammacharn submitted a list of five demands from the assembled monks to the deputy prime minister, which included endorsement of Somdet Chuang as supreme patriarch, enshrining Buddhism as the national religion in the constitution, and non-interference by government agencies in monastic affairs.

Speculation over who should take the office has been rife since last year, when the previous office holder was cremated in a royally sponsored ceremony. The 19th supreme patriarch of Thailand, Somdej Phra Nyanasamvara, died in October 2013 shortly after his 100th birthday. His remains were formally cremated in December 2015 after lying in state for two years.

Thailand is a predominantly Buddhist country, with 93.2 per cent of the nation’s population of 69 million identifying as Buddhists, . The country has approximately 38,000 temples and some 300,000 monks. Although full bhikkhuni ordination is not recognized in Thailand, communities of female renunciants, some of whom have been ordained overseas, exist, but do not enjoy the same level of societal acceptance as their male counterparts.The final decision will be taken by the majority of monks but it will take sometime more to click the plum post .