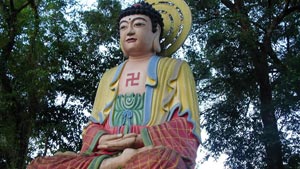 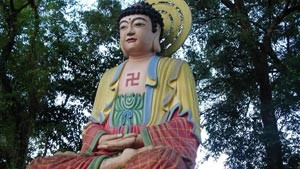 In Buddhism, the swastika (Sanskrit svastika, “all is well”) is a cross with four arms of equal length, with the ends of each arm bent at a right angle. Sometimes dots are added between each arm.
The swastika is an ancient symbol found worldwide, but it is especially common in India. It can be seen in the art of the Egyptians, Romans, Greeks, Celts, Native Americans, and Persians as well Hindus, Jains and Buddhists.
The swastika’s Indian name comes the Sanskrit word svasti, meaning good fortune, luck and well being.
In Hinduism, the right-hand (clockwise) swastika is a symbol of the sun and the god Vishnu, while the left-hand (counterclockwise) swastika represents Kali and magic. The Buddhist swastika is almost always clockwise, while the swastika adopted by the Nazis (many of whom had occult interests) is counterclockwise.
In Buddhism, the swastika signifies auspiciousness and good fortune as well as the Buddha’s footprints and the Buddha’s heart. The swastika is said to contain the whole mind of the Buddha and can often be found imprinted on the chest, feet or palms of Buddha images. It is also the first of the 65 auspicious symbols on the footprint of the Buddha. The swastika has also often been used to mark the beginning of Buddhist texts. In China and Japan, the Buddhist swastika was seen as a symbol of plurality, eternity, abundance, prosperity and long life.
The swastika is used as an auspicious mark on Buddhist temples and is especially common in Korea. It can often be seen on the decorative borders around paintings, altar cloths and banners. In Tibetan Buddhism, it is also used as a clothing decoration.
Share this...