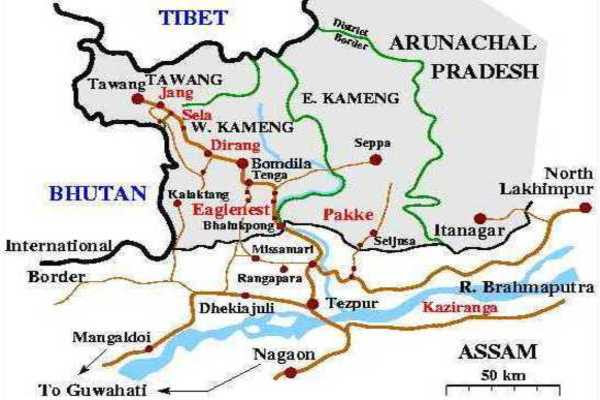 Tawang was historically part of Tibet inhabited by the Monpa people. The Tawang Monastery was founded by the Merak Lama Lodre Gyatso in 1681 in accordance with the wishes of the 5th Dalai Lama, Ngawang Lobsang Gyatso, and has an interesting legend surrounding its name, which means “Chosen by Horse”. The sixth Dalai Lama, Tsangyang Gyatso, was born in Tawang.

The 1914 Simla Accord defined the McMahon Line as the new boundary between British India and Tibet. By this treaty Tibet relinquished several hundred square miles of its territory, including Tawang, to the British, but it was not recognised by China.The British did not take possession of Tawang and Tibet continued to administer and collect taxes in Tawang. When the British botanist Frank Kingdon-Ward crossed the Sela Pass and entered Tawang in 1935 without permission from Tibet, he was briefly arrested. This drew the attention of the British, who re-examined the Indo-Tibetan border and rediscovered that Tibet had ceded Tawang to British India. Tibet did not repudiate the Simla Accord and the McMahon Line but refused to surrender Tawang, partly because of the importance attached to the Tawang Monastery.

Tawang in Arunachal Pradesh is “a part” of China and India’s “unfriendly” move to allow the Dalai Lama to visit the town will negatively impact bilateral ties as it involves “sensitive issues” related to the border dispute, a prominent Tibetan scholar said today.

In a rare interaction with the foreign media, he said the Dalai Lama’s planned visit to Arunachal Pradesh, which China claims as part of south Tibet, is an “unfriendly” move on the part of India.

Referring to the Dalai Lama’s planned visit to Arunachal Pradesh, he said in recent years the Indian government supported or made arrangements for the Dalai Lama to visit Tawang region.

“It seems to us that it is not so friendly,” he said.

During his previous visit to Tawang, “the Dalai Lama said Tawang part of India. This is against the facts. It is not true. It undermines the friendly relations between China and India,” he said.

The Tibetan leader is expected to visit Tawang early next month.

“We all know that between India and China there is the boundary question. What we should do is not to touch the sensitive areas but such a visit by the Dalai Lama will touch the sensitive issue. This will undoubtedly negatively affect friendly relations. We do hope history and facts are respected by both the parties,” Lian said.

Tawang Monastery was founded by the Mera Lama Lodre Gyatso in accordance to the wishes of the 5th Dalai Lama, Nagwang Lobsang Gyatso. It belongs to the Gelugpa sect and is the largest Buddhist monastery in India. The name Tawang (Tibetan: རྟ་དབང་, Wylie: Rta-dbang) means Horse Chosen. It is said to be the biggest Buddhist monastery in the world outside of Lhasa, Tibet.It is a major holy site for Tibetan Buddhists as it was the birthplace of the sixth Dalai Lama.

When the 14th Dalai Lama fled from Tibet to escape from Chinese army, he crossed into India on 30 March 1959 and spent some days at the Tawang Monastery before reaching Tezpur in Assam on 18 April.Tawang Monastery is said to be the biggest Buddhist monastery in the world outside of Lhasa, Tibet. Until 2003, the Dalai Lama said that Arunachal Pradesh was “actually part of Tibet”. He reversed his position in 2008, acknowledging the legitimacy of the McMahon Line and the Indian claim to the region. The Dalai Lama visited Tawang on 8 November 2009. About 30,000 people, including those from neighbouring Nepal and Bhutan, attended his religious discourse.