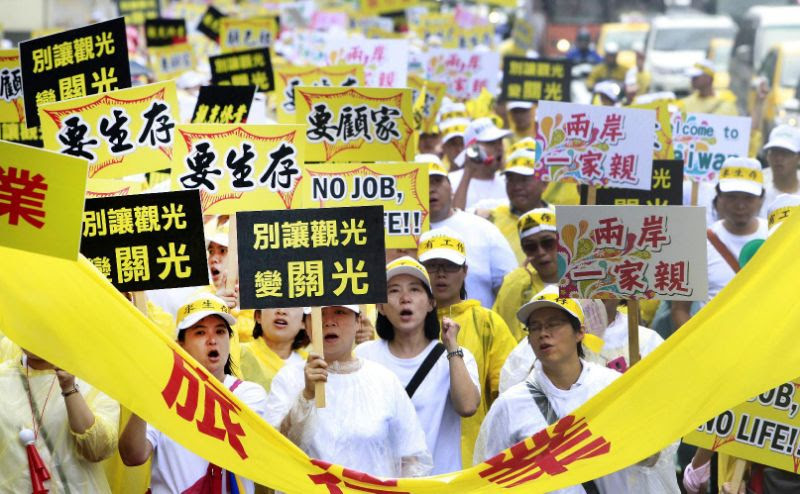 TAIPEI, Taiwan (AP) — Hundreds of Taiwanese workers in tourism-related businesses rallied in the capital Monday to draw attention to a sharp decline in Chinese visitors that is putting their industry under heavy strain.

Workers marched down a central street in Taipei before gathering outside the Presidential Office Building. They called for the preservation of jobs and assistance to the industry, including allowing the owners of tour buses to delay their loan payments.

“We only want the right to work. If (Chinese tourists) do not come, we cannot work. This is just our need,” said tour guide Debby Huang, 41.

Workers also urged the government to encourage domestic tourism and allow visa-free entry for travelers from the 10-country Association of Southeast Asian Nations as an inducement to visit.

The number of Chinese visitors has fallen since Beijing began discouraging travel to the island following the May inauguration of independence-leaning President Tsai Ing-wen.

Tsai has refused to endorse Beijing’s concept that Taiwan is part of a single Chinese nation, and reducing tourism is seen as one of the easiest and least risky ways of pressuring her government.

Accidents and an unwelcoming attitude among some Taiwanese are also blamed for contributing to the decline in Chinese visitors.

Government figures say the number of visitors from China has fallen by 22 percent since Tsai’s election compared to the same period last year. Chinese made up about 40 percent of tourist arrivals last year.

The government has already offered almost $960 million to bail out the industry.