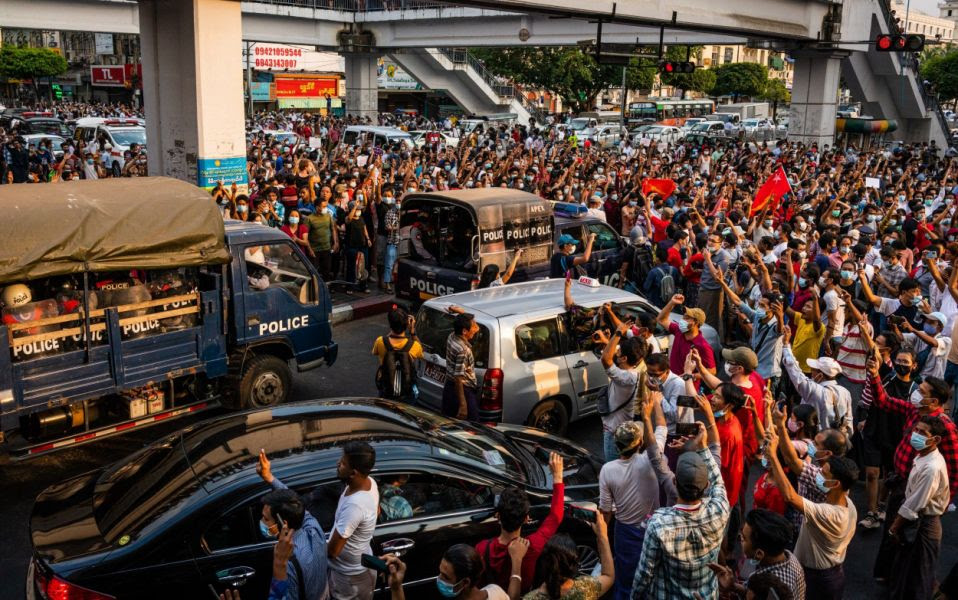 Protesters hold up Wanted posters with an image of Myanmar’s Commander-in-Chief Senior Gen. Min Aung Hlaing, as they march in Yangon – AP

By  —  Shyamal Sinha
Myanmar’s junta leader has called on the public to prioritise facts and not feelings, and said an election would be held and power handed to the winning party, in a rare national address, as anti-coup protests took place nationwide on the third day in a row.
Thousands of anti-coup protesters marched in towns and cities across Myanmar on Monday, witnesses said, demonstrating for a third straight day against the military’s removal and detention of elected leader Aung San Suu Kyi a week ago.

Calls to join protests and to back a campaign of civil disobedience have grown louder and more organised since last Monday’s coup, which drew widespread international condemnation.

In the biggest city of Yangon, a group of saffron-robed monks marched in the vanguard of Monday’s protest with workers and students. They flew multicoloured Buddhist flags alongside red banners in the colour of Ms Suu Kyi’s National league for Democracy (NLD), witnesses said.

“Release Our Leaders, Respect Our Votes, Reject Military Coup,” said one sign. Other signs read “Save democracy” and “Say No to Dictatorship”. Many protesters wore black.

Police fired the water cannon in brief bursts against a group of the thousands of protesters who had gathered in Myanmar’s capital Naypyidaw on Monday. Video from the scene showed some protesters appeared to have been hurt when they were knocked to the ground.

Police appeared to stop using the water cannon after protesters appealed to them, but the demonstration continued.

Protests that swept the country on Sunday were the biggest since the “Saffron Revolution” led by Buddhist monks in 2007 that helped prompt democratic reforms that were upended by the Feb. 1 coup.

“Marchers from every corner of Yangon, please come out peacefully and join the people’s meeting,” activist Ei Thinzar Maung urged followers on Facebook, using VPN networks to rally protesters despite a junta attempt to ban the social media network.

Protesters attempt to block riot police arriving to form a barricade outside Yangon City Hall on the weekend – GettyThousands marched in the coastal city of Dawei, in the southeast, and in the Kachin state capital in the far north, where they were dressed head to toe in black.

So far gatherings have been peaceful, unlike bloody crackdowns during previous widespread protests in 1988 and 2007. A convoy of military trucks was seen passing into Yangon late on Sunday, raising fears that could change.

Myanmar’s generals have justified the coup by claiming fraud in last November’s elections, which the NLD won in a landslide.

The junta has proclaimed a one-year state of emergency, and promised to then hold fresh elections, without offering any precise time frame.

The coup has triggered widespread international condemnation, although neighbouring China has declined to criticise the generals.

US President Joe Biden has been leading the calls for the generals to relinquish power.

Pope Francis on Sunday also expressed “solidarity with the people of Myanmar,” urging the army to work towards “democratic coexistence.”

Britain and the European Union requested on Monday that the United Nations Human Rights Council hold a special session in response to the ongoing political crisis.

The call comes came a week after Myanmar’s generals conducted a coup in the country.