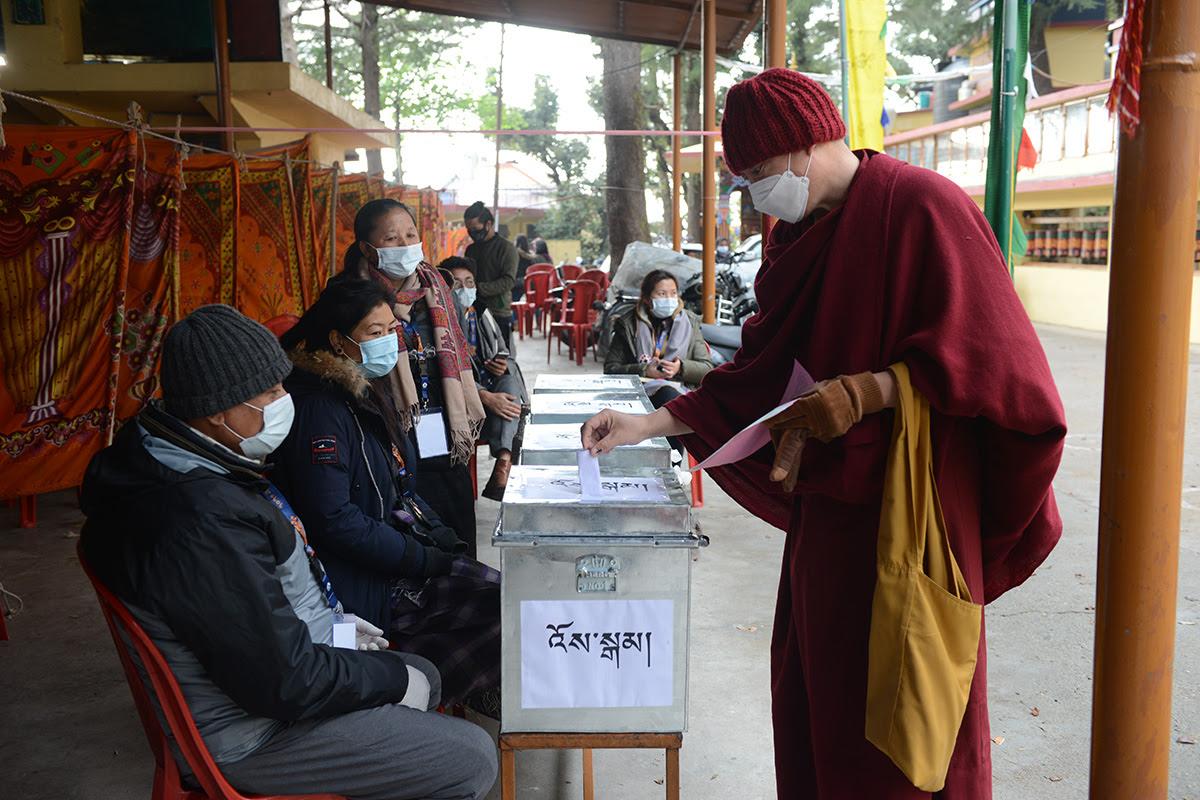 An exile Tibetan monk casts his vote in the preliminary round of elections to choose a new Sikyong and members of the Parliament at a polling station in McLeod Ganj, India, on 3 January 2021.File photo/Tibet Sun/Lobsang Wangyal

With much enthusiasm and excitement, more than 60 thousand Tibetans in over 30 countries took part in the preliminary round of elections to choose their new leader known as Sikyong and the members of the exile Tibetan Parliament.

The results will be announced by the Election Commission through a press conference tomorrow (Monday 8 February) at 11am IST.

For the Sikyong results, the Election Commission will announce Penpa Tsering as leading in the first round with close to 24 thousand votes, followed by Kaydor Aukatsang securing close to 14,000 votes. Gyari Dolma trailed Kaydor with a difference of around 700 votes, leaving her out of the race for Sikyong.

A total of about 60 thousand exile Tibetans cast their votes in the elections, which also chose candidates for the 45 members of the exile Tibetan Parliament.

Those who could be candidates will be declared on 21 March, with two contestants for the post of Sikyong, and more than 90 candidates (along with some volunteer candidates) for members of Parliament. There will be time for about a month for those in the list to withdraw their names, so that the final list could be drawn.

The final round of voting will be held on 11 April, and the official results will announced on 20 May. The new members of the Parliament will take their oath of office on 28 May, and the new Sikyong will likely be sworn-in in the following days.

Everyone commended the smooth and peaceful conclusion of the preliminary round of voting. However there were a few incidents of malfunctions.

The counting in Bodh Gaya took place the next day on the 5th January, but the election rule 34 (6)(a) has it that there wouldn’t be any counting in the 24 hours following an election.

There was re-voting for about 30 people at a polling station in Ladakh following a complaint that someone helping another voter had written the name of his choice rather than what the person wanted.

Tibet Sun has learned that the complainant was an election staff, who asked the voter for whom he was voting. Upon learning whom this voter was favouring, the staff checked his ballot paper and found out that the helper had written a different person’s name.

Following the row, all 30-something people there were asked to re-cast their votes, which is not according to the rules.

Jungney also added that the election staff have no right to ask who someone was voting for, nor to check the ballot paper of any voter. He said that the staff member had also violated election rules by this behaviour.

In Sataun settlement, the results have not been made public at all. According to election rule 34(6)(a), the results need to be made public within 24 hours of the counting. Tibet Sun’s attempts on clarification didn’t convince the Regional Election Commissioner of the settlement.

The Chief Election Commissioner remained unapproachable throughout the election process. Tibet Sun then approached the secretary of the Election Commission, Tenzin Norbu, about the Sataun REC not making the results public, Norbu supported the action of the REC Sataun, and insisted that it was not required to make the results public. “To make it public is not mentioned in the rules,” said Norbu.

Pema Jungney said that to say it is not required to announce results publicly is distortion of the rules. “It is clearly mentioned in the rules that election results should be made public, within 24 hours of the counting” he said.

Australia, Europe, and North/South America have only one REC each. All the Representatives are RECs in these countries.