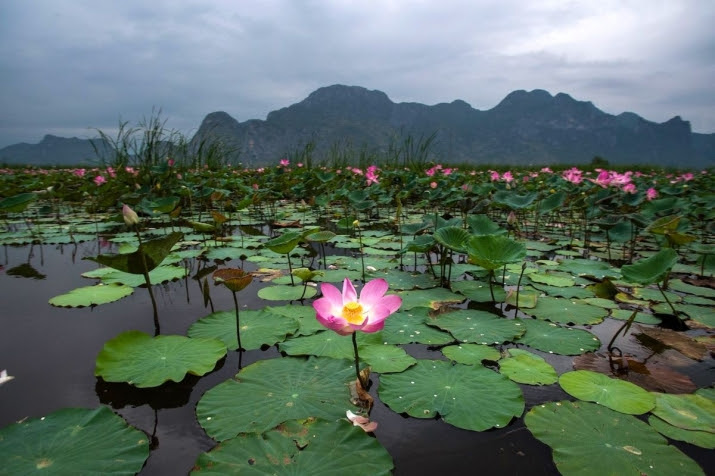 The lotus flower is one of the Ashtamangala of Buddhism, representative of creation and cosmic renewal and “primordial purity”  and shares in the chakra and mandala symbolism of the Dharmacakra.

For the first time in 10 years, a wetland nature reserve in Thailand has exploded into a sea of color as tens of thousands of sacred lotus flowers spread across its surface have blossomed into a spectacular expanse of pink and green.

Rangers and park officials at Khao Sam Roi Yot national park, a three-hour drive south of Bangkok, have been surprised and gratified to see the blooms return to the wetland, but remain wary that the stunning vista will attract an influx of tourists eager to witness the phenomenon firsthand, endangering the fragile ecosystem.

“Right now the lotuses are rejuvenating and growing again, but it will take some time for them to be beautiful,” said Nisakorn Tongprong, who heads an environmentalist group at the national park. “This year, the water level came back up to two meters in some areas, but now mostly they’ve decreased to 50 to 80 centimeters because of the heat and the wind. Still, I’m confident that the swamp won’t dry up because summer is almost over and the lotuses are strong, new plants.”  (Khao Sod English)

The reason for the disappearance of the lotuses is not fully understood, but environmentalists believe that it was likely caused by a combination of droughts, and chemical pollution from nearby  seafood farms and agricultural fertilizers. Indeed, the 69-square-kilometer wetland at Khao Sam Roi Yot was in its worst condition in 30 years in 2016, when drought caused the wetland to dry out completely. The unexpected bloom this year stands as a testament to the efforts of the national park’s officials to rehabilitate and restore the delicate balance of the natural habitat.

The rejuvenated wetland expanse is comprised of Nelumbo nucifera, also known as Indian lotus and sacred lotus, while most other existing lotus fields in the area contain the smaller Nymphaea nouchali, or star lotus. The flowers are sacred in Thai culture, a predominantly Buddhist society and are also used in traditional Thai medicine, cooking, and cultural celebrations. The lotus is a symbol of purification and enlightenment in Buddhism, rising clean and fragrant above the mud in which it is rooted.

The rare spectacle of the blooming lotuses has traditionally attracted crowds of tourists, which is good news for local entrepreneurs who can charge to ferry boatloads of vistas across the marshland. However, head park ranger Rungroj Aswakultarin cautioned that “currently they should not come. The national park is in the process of restoring the lotuses. When it comes to the right time the park will open them up to the public,” he said, adding that one section of the wetlands currently open to tourists in order to protect the flowers. (Hindustan Times)

Thailand is a predominantly Buddhist country, with 93.2 per cent of the nation’s population of 69 million identifying as Buddhists, according to 2010 data from the Washington, DC-based Pew Research Center. The country is home to approximately 38,000 temples and some 300,000 monks.

In Buddhist symbolism the lotus is symbolic of purity of the body, speech, and mind as while rooted in the mud, its flowers blossom on long stalks as if floating above the muddy waters of attachment and desire. It is also symbolic of detachment as drops of water easily slide off its petals.

It is also to be noted that many Asian deities are depicted seated on a lotus flower. According to legend, Gautama Buddha was born with the ability to walk and everywhere he stepped, lotus flowers bloomed.