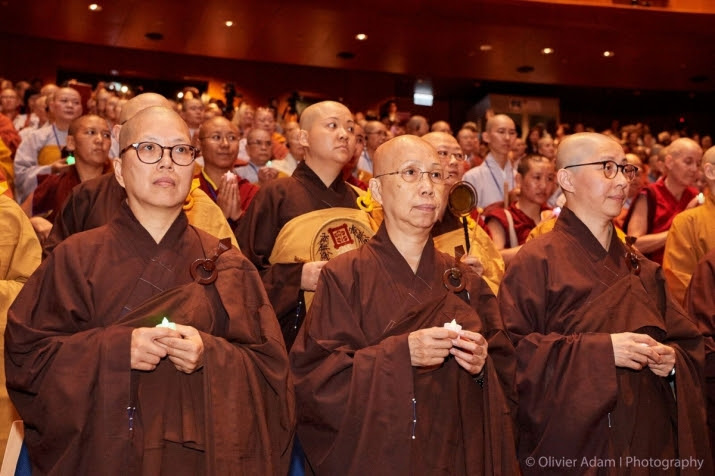 Women’s position in Buddhism is unique. The Buddha gave women full freedom to participate in a religious life. The Buddha was the first religious Teacher who gave this religious freedom to women. Before the Buddha, women’s duties had been restricted to the kitchen; women were not even allowed to enter any temple or to recite any religious scripture. During the Buddha’s time, women’s position in society was very low. The Buddha was criticized by the prevailing establishment when He gave this freedom to women. His move to allow women to enter the Holy Order was extremely radical for the times. Yet the Buddha allowed women to prove themselves and to show that they too had the capacity like men to attain the highest position in the religious way of life by attaining Arahantahood. Every woman in the world must be grateful to the Buddha for showing them the real religious way of living and for giving such freedom to them for the first time in world history.

The 15th conference of the Sakyadhita International Association of Buddhist Women opened at the University of Hong Kong, kicking off 7 days of sharing, discussing, and celebrating the theme, “Contemporary Buddhist Women: Contemplation, Cultural Exchange and Social Action.” This theme highlights the diversity of contemporary Buddhist women throughout the world and the need to unite and share experiences and ideas. The conference aims to bring together scholars, monastics (both nuns and monks), and members of the public to forge pathways forward for the interests and needs of Buddhist women in not only Asia but around the world.

Jetsunma Tenzin Palmo, president of Sakyadhita and chairwoman of the conference, expressed the hope that this years’ meet could serve as a bridge strengthening the connection between East and West, with Hong Kong serving as a gateway to greater China.

The opening of the conference emphasized the diversity and unity of Buddhist women all over the globe. The chanting that started the opening ceremony showcased the rich diversity of the lineages and schools present (Theravada, Chinese, Korean, Vajrayana, Vietnamese, among others). The nuns, although at times somewhat flustered and lost amidst all the attention, were extremely endearing and inspiring, and captured the hearts of all those present.

In the speeches that followed, each of the speaker took time to welcome everyone and highlight the uniqueness of the gathering.

Jetsunma Tenzin Palmo emphasized that the conference celebrates the achievements of both monastic and lay Buddhist women, but also stressed that even though the conference was about women, it is certainly not anti-men, and all the lay and monastic men present were most welcome.

Professor C. F. Lee, professor in engineering and founding fellow of HKU Centre of Buddhist Studies, stressed how he is continuously impressed with the advancement of women in his department of engineering, who are now obtaining higher grades than ever. He also stressed that Hong Kong is a very good place for a woman to grow up and prosper.

Professor Karma Lekshe Tsomo, international Buddhist women representative, praised the diversity of the audience, who were quite a sight to behold from the stage. Seeing everyone dressed in the robes and colors of their school reminded her of a beautiful rainbow.

The name Sakyadhita means Daughter of Shakya (denoting the clan name of the historical Buddha), and Rongdao Lai, assistant professor of religion and keynote speaker of the conference, expressed her joy and pride to be able to call herself one of the daughters of the Buddha. She called upon all her sisters, all daughters of the Buddha present in the hall, to meet old and new friends, to strengthen resolve, and share stories.

The conference will continue until coming Wednesday the 28th of June. Each day there will be many paper presentations and workshops on a variety of topics as well as many cultural and spiritual activities.

The Buddha has confirmed that man is not always the only wise one; woman is also wise.

Nowadays many religionists like to claim that their religions give women equal rights. We only have to look at the world around us today to see the position of women in many societies. It seems that they have no property rights, are discriminated in various fields and generally suffer abuse in many subtle forms. Even in western countries, women like the Suffragettes had to fight very hard for their rights. According to Buddhism, it is not justifiable to regard women as inferior. The Buddha Himself was born as a woman on several occasions during His previous births in Samsara and even as a women He developed the noble qualities and wisdom until He gained Enlightenment or Buddhahood.

You can see more images from the 22nd below.