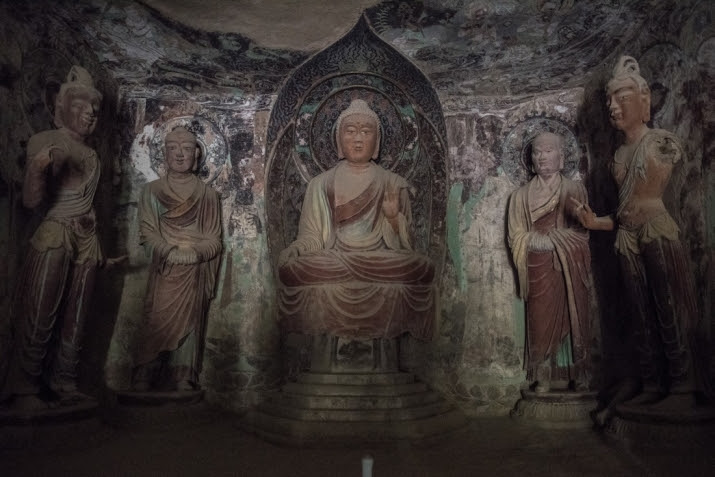 In a Mogao cave, a Buddha statue surrounded by disciples dating from the Tang dynasty (618–907). Photo by Gilles Sabrié. From washingtonpost.com

The Gobi Desert, contain some of the finest and oldest works of Buddhist art in China that have survived the vicissitudes of human activity and the elements for centuries. Yet while the caves have withstood hundreds of years of natural disasters, bandits, explorers, and armed conflict, they are now subject to the ravages of a far more insidious threat: modern tourism.
In the first seven months of this year, visits to the caves jumped 31 per cent to 598,000 tourists, according to statistics from Dunhuang Research Academy, which is responsible for the conservation, management, and research of the historic site. Now in the middle of the peak July–October tourist season, visitors to the caves reached a single-day record for the year on Wednesday last week of 19,301, according the China’s Xinhua News Agency, which also noted an increase in the number of foreign tourists. Tickets sold out again on Tuesday this week, Xinhua reported, with 6,000 daily tickets and 12,000 “emergency” tickets sold by 10am.
The volume of tourists visiting the caves is such that the resulting high levels of carbon dioxide in the enclosed spaces threaten the integrity of the ancient sculptures and frescoes. According to the Dunhuang Research Academy, the density of carbon dioxide in a cave can rise by five times if 40 visitors stay inside for 30 minutes.

The west wall of cave 285. buddhist-art.arthistory.northwestern.edu
A UNESCO World Heritage Site since 1987, the Mogao Caves, also known as the Thousand Buddha Grottoes, located near the city of Dunhuang in China’s northwest Gansu Province, include some 492 Buddhist temples dating from the 4th to the 14th century, decorated with more than 45,000 square meters of exquisite frescoes and some 2,000 sculptures. The caves were visited by countless travelers, merchants, and Buddhist pilgrims during the period that Dunhuang served as a strategic oasis and major crossroads on the ancient Silk Road and are now more popular than ever.
The draw of the caves as a tourist attraction has soared in recent years as a result of their growing fame in China and overseas, facilitated by improved transportation links between Dunhuang and other parts of China. Chinese president Xi Jinping’s ambitious economic and trade development initiative known as “One Belt, One Road”—a plan to resurrect the Silk Road for the 21st century—has also served to renew interest in the Silk Road and historic sites along the ancient trade routes.
“In the past 100 years, most of the damage has been done by nature, but visits by more tourists will break the original balance inside the caves,” said Wang Xudong, president of Dunhuang Research Academy. “Constant entrance and exit changes the temperature and humidity inside the caves. Human bodies also carry micro­organisms, and if they start to grow inside the caves, it would be very scary.” (The Washington Post)

A technician restoring a wall paintings in cave 98. Photo by Gilles Sabrié. From nzherald.co.nz
Taking its name from the lucrative trade in Chinese silk products that was conducted along its length, beginning during the Han dynasty (207 BCE–220 CE), the Silk Road was key to cultural as well as commercial interaction throughout Asia and as far west as the Mediterranean Sea. Trade on the Silk Road was a significant factor in the development of civilizations in China,
Share this...