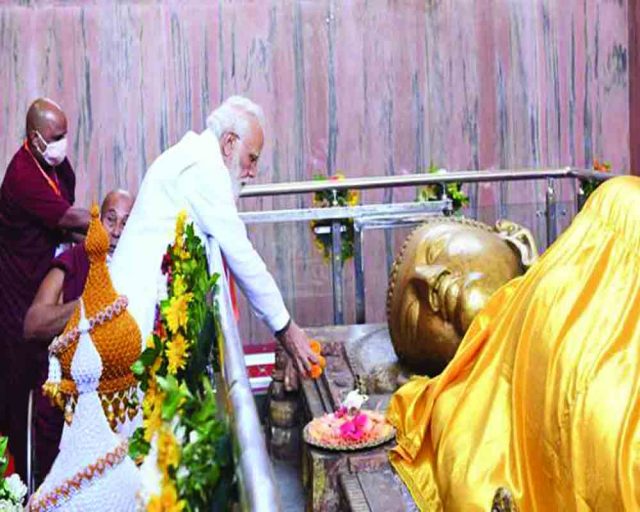 Prime Minister Narendra Modi on Wednesday (Oct 20, 2021) formally inaugurated the International Airport at Kushinagar and to mark this historic occasion an inaugural international flight from Sri Lanka landed at this airport

Kushinagar is considered to be a focal point of the Buddhist Circuit in India and the new international airport is likely to strengthen people to people interactions between India and Sri Lanka substantially.

The inaugural flight not only underscores the deep people to people linkages but also millennia old civilizational ties between the two neighbouring countries, the High Commission of India in Colombo said in a statement. Buddhism is central to the abiding cultural, spiritual and linguistic bonds in this bilateral relationship.

The Sri Lankan delegation is also  visited Varanasi during their stay in India. Special prayers  held at the Kashi Vishwanath Temple for the delegation later today. They will also have a Ganga Darshan before they return to Colombo .

Adding to the significance of the occasion, the sacred Kapilavastu Buddha relics from the Rajaguru Sri Subhuthi Maha Vihara of Waskaduwa will also travel on the inaugural flight on Vap Poya Day. The sacred relics are being ceremonially brought on board the first international flight to Kushinagar by Most Ven. Waskaduwe Mahindawamsa Nayaka Thero, Chief Incumbent of the Rajaguru Sri Subhuthi Maha Vihara who is the present custodian of the relics.

The sacred relics will be received with due reverence at the new international airport in Kushinagar on arrival and will be accorded full State honours by Government of India. Exposition of the relics will be held in several Indian cities including Kushinagar and Sarnath.

The sacred Piprahwa relics which are the only documented authentic relics of The Buddha in Sri Lanka were discovered in the late 19th century in India and form a part of the Kapilavastu relics.  They were brought to Sri Lanka by the Most Ven. Waskaduwe Rajaguru Sri Subhuthi Nayaka Thero and are currently kept at the Waskaduwa Viharaya in Kalutara. PM Modi made a special mention about this temple in his virtual address delivered on Buddha Purnima in May 2020.

Abhidhamma Day also marks the end of the rains retreat (vassa), when monks conclude a period of relative seclusion to begin traveling again. The day is celebrated with processions and gifts from laity to monastic communities.

India’s prime minister, Narendra Modi, was among the politicians celebrating the holiday and the new airport at Mahaparinirvana Temple, where the Buddha is said to have given his last sermon before attaining parinirvana. As part of his visit, Modi made offerings to the reclining Buddha statue at the temple and planted a bodhi tree sapling. From dailypioneer.comAmong the Buddhist leaders were the heads of all four orders of Buddhism recognized in Sri Lanka: Asgiriya, Amarapura, Ramana, and Malwatta.

According to sources, on board the inaugural flight from Sri Lanka there was a delegation, led by Cabinet Minister Namal Rajapaksa, who is the son of Prime Minister Mahinda Rajapaksa. He is handling several ministerial charges including Youth & Sports, Development Coordination and Monitoring and he is also State Minister of Digital Technology and Enterprise Development.

He is accompanied by a big delegation of around 100 senior Buddhist monks, 4 State Ministers and other senior officials.

They have all arrived from Colombo on the auspicious Vap Poya Day.

During their stay, the Sri Lankan delegation  visited  Varanasi, the major city just minutes by car from Sarnath where the Buddha gave his first sermon.

Other Buddhist leaders in attendance came from Bhutan, Cambodia, Myanmar, Nepal, South Korea, and Thailand, as well as diplomatic officials from several countries. From indiatimes.comKushinagar is one of the four major pilgrimage sites for Buddhists. While it attracts devotees from around the world, its relative isolation has kept visitor numbers low. The new airport is expected to give the city and surrounding community a major boost in tourism revenue. Tourism to Kushinagar is expected to increase by 15 to 20 per cent in coming years. It is part of a longstanding plan by the Indian government to boost tourism to key Buddhist sites, strengthening both tourism and diplomatic ties with Buddhists around the world.

Other sites which are of Buddhist significance include: Lumbini, Sravasti, and Kapilvastu, which are not far away.