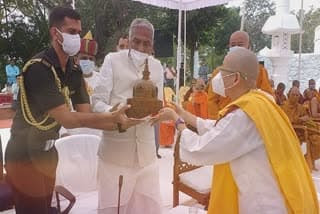 By   —  Shyamal Sinha
The 52nd anniversary celebrations of Vishwa Shanti Stupa located on Ratnagiri mountain of Rajgir were celebrated with great pomp.
The Vishwa Shanti Stupa Is Located On A 400 Metre High Hill. The Stupa Is Built In Marble And On The Four Corners Of The Stupa Are Four Glimmering Statues Of Buddha. To Reach The Top Of This Hill One Has To Come Through The “Ropeways”. This Place Is Also Called The Gridhakuta.
The ceremony began with a prayer meeting and intellectual chanting by local Buddhist monks. On this occasion, the Governor of Bihar Fagu Chauhan also participated and offered prayers.
The governor also attended a special prayer led by the chief monk, T Okonoki, who presented him a memento. Monks of Nichidatsu Fujii and others also carried out an elaborate prayer on the occasion.
Speaking on the occasion, the governor reminded people of the relevance of peace, non-violence, brotherhood and fraternity preached by Gautam Buddha. He said the teachings of Lord Buddha are relevant even today, especially when people are struck by different calamities, including Covid.
Rajgir Buddha Vihar Society’s secretary Mahashweta Maharathi, who conducted the programme, highlighted the work and sacrifices of Lord Buddha and also the importance of the construction of Vishwa Shanti Stupa as a sign of global peace. She also read out messages of monks from Japan and other places who couldn’t visit due to Covid restrictions. She also read out a message from CM Nitish Kumar.
The then Bihar governor Ram Nath Kovind, who is now the President of the country, had inaugurated the function organised to mark the 50th anniversary of the construction of World Peace Pagoda in 2019. Constructed by philanthropist Nichidatsu Fujii, President V V Giri had inaugurated it on October 25, 1969 while its foundation stone was laid by the then president, Sarvepalli Radhakrishnan, in 1965.
Governor Phagu Chauhan later visited Saddharma Vihar Temple, eco-friendly Ghora Katora lake, Nature Safari and glass bridge.
Share this...