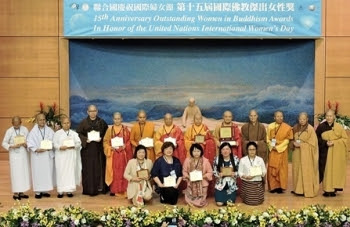 Recipients of the award in Jing Si Hall. From Tzu Chi Foundation “outstanding women in Buddhism” was held in Taiwan on 8 March, the day recognized worldwide as International Women’s Day. A total of 14 women, 6 of them from Taiwan, received awards at the event, the 15th ceremony of its kind. Held annually since 2002, the celebration took place this year at the Tzu Chi Foundation’s Jing Si Hall in Hualien County, the first time for the proceedings to be held in Taiwan.

According to a press release from Tzu Chi, the ceremony was jointly organized by the Outstanding Women in Buddhism Awards and the Chinese Young Buddhist Association, with assistance from Tzu Chi. “The hall was full of nuns from Thailand, Malaysia and Taiwan, as well as Buddhist believers, in an atmosphere of joy and happiness,” it stated.

In a speech to congratulate the award recipients, Ven. Ming Yu, chairwoman of the award committee and of the Chinese Young Buddhist Association, said: “Today, the award ceremony is being held on United Nations Women’s Day. It is extremely significant for the women who are receiving the award. Through these activities that reward these women, it is showing the role of women in society and the positive influence resulting from their status. This will draw attention to these outstanding women in different sectors and promote international exchanges in Buddhist culture, gender equality and the interests of women.”

The award was first proposed in March 2001 by Thai bhikkhuni Ven. Rattanavali and an American nun, Ven. Dr. Lee. The two nuns had attended two events (The Outstanding Women’s Awards in Thailand and an International Women’s Day celebration at the UN Auditorium on 8 March the same year) and noticed their positive influence on women. Ven. Rattanavali therefore suggested to Ven. Dr. Lee that an award should be established to recognize and encourage Buddhist women, and the two nuns began exploring the means to make this idea a reality.

Since 2002, the award has been given annually to Buddhist women who have made outstanding contributions in various sectors. According to the International Women’s Meditation Center Foundation, “The Outstanding Women in Buddhism Awards are part of an international women’s movement calling for change and celebrating the acts of courage and determination by women in the history of Buddhism.”

At the 15th award ceremony in Hualien this year, Ven. Ming Yu said: “Since the awards were established in 2002, 208 outstanding women from 24 countries have received them. Each year the award ceremony has been held in Thailand. This year, in 2016, the event is being held for the first time in Tzu Chi Jing Si Hall in Taiwan. This shows the international respect and affirmation for the Buddhist nuns and laywomen for their contribution to society.”

One of the guests at the ceremony was Huang Li-Hsin, chief secretary of Taiwan’s Ministry of the Interior. In her speech, she said: “According to statistics of the ministry, there are more than 20,000 Buddhist clergy in Taiwan, of whom nuns account for 80 per cent—about 15,000 people. The women of Taiwan are giving a shining example in religion and politics. As a Taiwanese woman, I feel very proud.”

The awards have recognized many women who are based in their local communities and not always acknowledged globally.