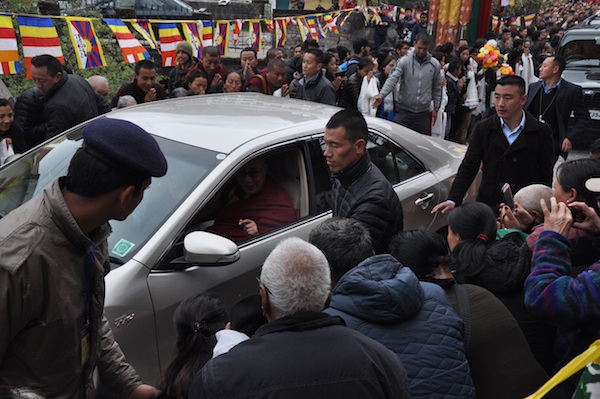 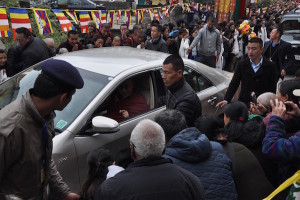 His Holiness the Dalai Lama arrives in Tsuklakhang amid hundreds of devotees offering him a traditional welcome on 13 March 2016.

His Holiness the Dalai Lama returned to his official residence in Dharamshala today after a month-long treatment at Mayo Clinic in Rochester, Minnesota, USA.

Hundreds of Tibetan and non-Tibetan devotees offered warm welcome to His Holiness the Dalai Lama with flowers and traditional Tibetan scarves called khata.

On his arrival at Gaggal Airport, His Holiness was received by Sikyong Dr Lobsang Sangay, the Speaker of Tibetan Parliament-in-Exile Mr Penpa Tsering and officials and representatives of Central Tibetan Administration.

His Holiness’ upcoming schedule includes a Public Talk in Salt Lake City, USA, on 21 June, a two and a half day Mind & Life Dialogue in Brussels, Belgium from 9 – 11 September, a one-day teaching on Nagarjuna’s Commentary on Bodhicitta (jangchup semdrel) and anAvalokiteshvera Initiation (chenresig wang) on 17 and 18 September, in Strasbourg, France followed by a public talk on Ethics beyong Religoin.