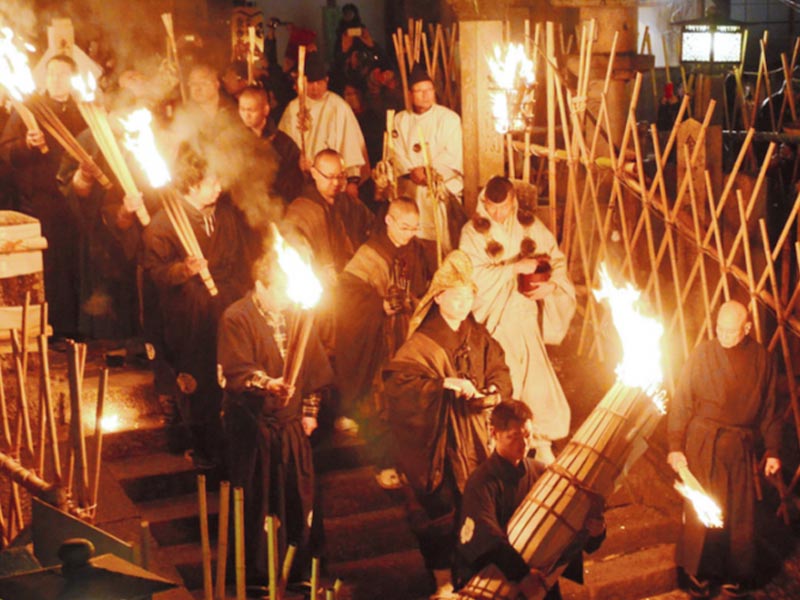 Torches illuminate a procession during the Omizutori water-drawing ceremony at Todai-ji on 13 March. Photo by Yumi Kurita. Fromajw.asahi.com

The historic Buddhist temple Todai-ji in the Japanese city of Nara early on Sunday morning to observe the annual Omizutori, or water-drawing, ceremony. Dating to 752, Omizutori, which is performed with the intention of cleansing the participants and attendees of negative karma, takes place during the two-week-long Shunie Buddhist festival held in Nara to banish drought, epidemics, and war and to bring good luck.

During the ceremony, performed by torchlight and accompanied by ancient imperial court music, or gagaku, a senior Buddhist monk accompanied by two attendants entered the temple complex’s Akaiya building below the famed Nigatsudo Hall, where the Wakasai well is located. Five other monks, their attendants, and representatives from local community groups then accompanied the senior monk in a procession, bearing sacred water from the well as an offering to the 11-faced Kannon, the bodhisattva of compassion, housed in Nigatsudo Hall.

One attendee, 72-year-old Tadanori Takiguchi, a resident of Yamatokoriyama City in Nara Prefecture, expressed his appreciation at being able to witness the historic tradition. “I could finally watch the Omizutori, which is held in a solemn atmosphere that is completely different from the Otaimatsu torch-burning performance,” he said in reference to a spectacular ritual held during the evenings of the Shunie festival. During Otaimatsu, which takes place shortly after sunset from 1–14 March, giant flaming torches are borne up to the balcony of Nigatsudo Hall, where they are held over the crowd. The burning embers that shower down are believed to herald a safe year for those below. (Asahi Shimbun) Buddhist acolytes hold giant torches over the crowd during the Otaimatsu ceremony at the temple Todai-ji. Photo by Yuta Takahashi. Fromaww.asahi.com

According to Japanese legend, deities from across the country were invited to Todai-ji to attend the Shunie festival, but the deity Onyu Myojin from Wakasa Province in present-day Fukui Prefecture arrived late because he was preoccupied with fishing. As a token of apology, Onyu Myojin sent fresh water from Wakasa to Todai-ji, which became the sacred well around which the water-drawing ceremony is based.

“I felt the marvelous spirit of the culture, which has been passed down even though the times have changed,” Takiguchi enthused. (Asahi Shimbun)

Todai-ji was one of seven historically influential Buddhist temples in the city of Nara, a former capital of Japan from 710–94. Todai-ji was founded by Emperor Shomu (r. 724–49) as the head temple of a network of provincial monasteries throughout Japan. The extensive complex, constructed largely from wood, has been rebuilt and restored on numerous occasions since its founding due to fires, earthquakes, and other disasters. The site now forms part of the UNESCO World Heritage Site “Historic Monuments of Ancient Nara,” which comprises five Buddhist temples, a Shinto shrine, a palace, and a primeval forest. Todai-ji’s main hall houses the world’s largest bronze statue of the Buddha Vairochana.

The temple also serves as the headquarters of the Kegon school of Buddhism—the Japanese transmission of the Huayan school of Mahayana Buddhism that first flourished in China during the Tang dynasty (618–907).This kind of ceremony recalls our old tradition but looks more lively also.