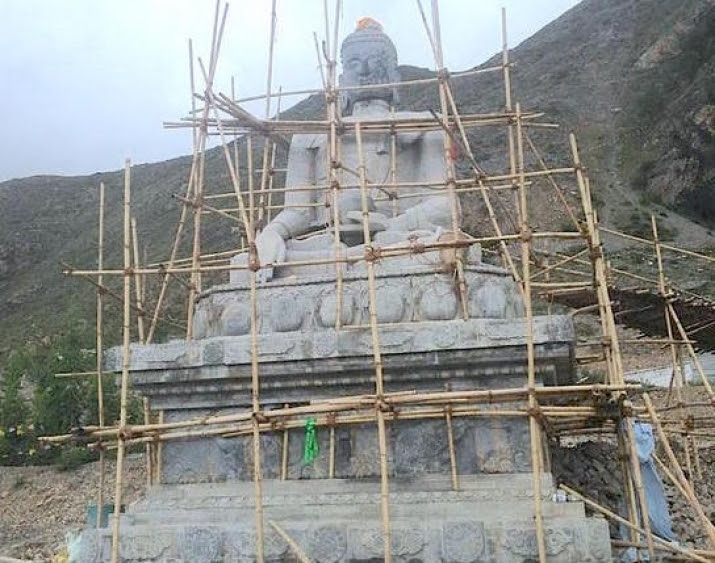 a Ready for Viewing

The new stone Buddha in Mustang, Nepal. From huffingtonpost.comNepal’s largest stone Buddha is now open to the public. Situated at an altitude of 12,600 feet in Mustang’s Muktinath Valley, the Buddha was erected in the vicinity of Muktinath Temple, a pilgrimage spot for both Hindus and Buddhists, and has a height of 32 feet. The Muktinath Temple is considered to be a Shakti Peetha for a yatra. Shakti Peethas are sacred abodes of Shakti formed due to the falling of body parts of the corpse of Sati Devi, when Lord Shiva carried it and wandered.

The statue is reportedly made from a special stone from Pharping, a sacred site to the southwest of Nepal’s capital, Kathmandu. (The Huffington Post)

The Buddha was built by brothers Dharmaraj Shakya and Uttam Shakya and funded by social worker and entrepreneur Sonam Lama and his wife Nima Lama. Sonam Lama is the owner of restaurant and grocery businesses in New York City. Work on the statue began in 2013 and cost more than 15 million Nepalese rupees.

The largest Buddha statue in Nepal that is made of cement stands at 67 feet and is located in Amitabha Buddha Park, to the west of Swayambunath Stupa in Kathmandu.

At a weight of 60,000 kilograms (132,277 lb), the Mustang stone statue joins the ranks of some of the world’s largest Buddhas—although it does not quite match up to Scribol’s stone competitors from around the world. The destroyed standing Buddhas at Bamiyan in Afghanistan, for example, are ranked at number 16 (180 feet and 121 feet). 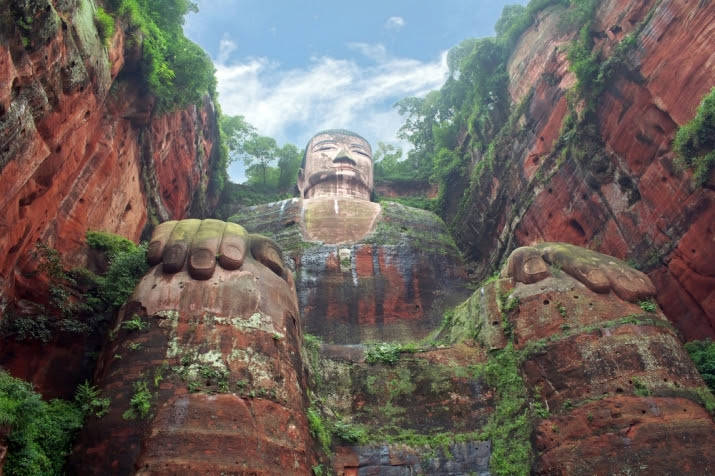 The Leshan Giant Buddha. From worldheritage.routes.travel 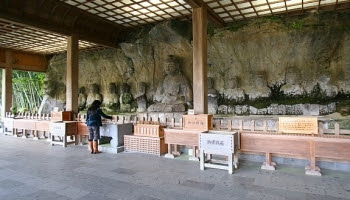 The Usuki Buddhas. From Fromjapan-guide.com

At 233 feet, the stone Leshan Giant Maitreya Buddha in China is considered to be the largest stone Buddha in the world. It was constructed by a Chinese monk, Master Haitong, in 713 and completed in 803. Carved out of a cliff at the confluence of the Minjing, Dadu, and Qingyi rivers in southern Sichuan Province, it faces Emei Mountain, one of the four sacred Buddhist mountains in China and dedicated to the bodhisattva Samantabhadra. 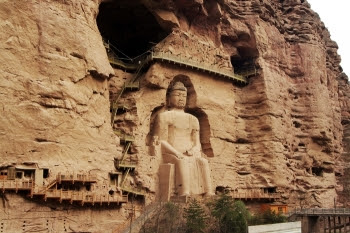 Even when size isn’t taken into account, stone Buddhas are easily some of the most beautiful and striking Buddhist landmarks in the world. The Usuki Stone Buddhas in Kyushu, for example, are the only stone Buddhas in Japan to be designated a National Treasure, the most precious category of Japan’s tangible cultural properties. They were sculpted sometime during the late Heian era (745–1185) out of the soft volcanic rock of Mount Aso, an active caldera at the center of Kyushu (japan-guide.com). In China, the Bingling Temple is a series of 183 grottoes, with the earliest cave being excavated in 420, the year the Eastern Jin Dynasty (317–420) collapsed. At the complex is a Buddha with a height of 88 feet. It is in a similar sitting pose to the Maitreya Buddha of Leshan. 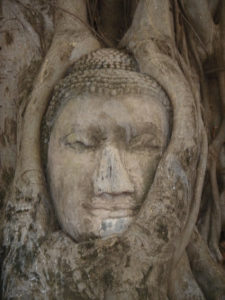 Another extraordinary stone Buddha is the Buddha head lodged in a tree at the temple of Wat Mahatat in Ayutthaya Historical Park, Thailand. According to Ten Thousand Trees, a blog specializing in trees, “It is told that in 1767 the Burmese attacked and destroyed Ayatthuya. In the process they chopped of the heads of all of the Buddha statues. This particular head must have fallen among the prop roots of a bodhi tree. Over the centuries the roots have grown around the head in such a way that almost seems intentional.” (ten-thousand-trees.blogspot.hk). It is considered to be one of the holiest places of pilgrimage for Hindus and Buddhists.