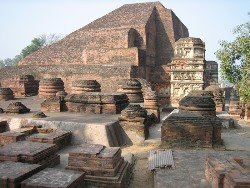 Nalanda University (also known as Nalanda International University) is located in Rajgir, near Nalanda, Bihar, India. The University began its first academic session on September 1, 2014 with 15 students including five women. Initially set up in temporary facilities in Rajgir, a modern campus is expected to be finished by 2020.

The remains of Nalanda University has joined Mahabodhi Temple of Bodh Gaya in UNESCO’s list of World Cultural Heritage after UNESCO, a specialized agency of the UN, yesterday announced the ancient Buddhist university’s inclusion in the list at the 40th session of the World Heritage Committee in Istanbul.

Along with Nalanda University, UNESCO has added Zuojiang Huashan Rock Art Cultural Landscape in China, The Persian Qanat of Iran and Micronesia’s artificial islets of Nan Madol. The ruins of Nan Madol was also listed in the World Heritage in Danger.

The archaeological remains of the once the center of Buddhist learning and a scholastic institution dates back to the 3rd century to the 13th century. It includes stupas, shrines, residential and educational buildings.

According to a press release from UNESCO, Nalanda stands out as the most ancient university of the Indian Subcontinent to engage in the organized transmission of knowledge over an uninterrupted period of 800 years. The historical development of the site testifies to the development of Buddhism into a religion and the flourishing of monastic and educational traditions.

Meanwhile, Bihar Chief Minister Nitish Kumar thanked everyone involved in the process for making it the second world heritage in Bihar after Mahabodhi Temple.

Culture Minister Mahesh Sharma stated that they were hopeful about Nalanda but had kept their fingers crossed.

It was not an easy ride for Nalanda since the over 200-page dossier India submitted last year were pointed out with several ‘weaknesses’ by International Council on Monuments and Sites (ICOMOS), which evaluates nominated sites.

The council suggested deferring Nalanda’s bid and recommended the team for more in-depth study of the site to explain its importance and authenticity. It also asked to change the name of the project to ‘Archaeological Site of Nalanda Mahavihara’ from ‘Excavated Remains of Nalanda Mahavihara’.

Ruchira Kamboj, India’s Permanent Representative to UNESCO in Paris and Archaeological Survey of India played an important role in convincing the council.

Nalanda University is the most important site for the teachings of Buddha to spread throughout the world and has produced great many Indian scholars including Nagarjuna, Aryadeva, Chandrakirti and Naropa etc.

The University of Nalanda is proposed to be established under the aegis of the East Asia Summit (EAS), as a regional initiative. The NMG also has representatives from Singapore, China, Japan andThailand.
Share this...