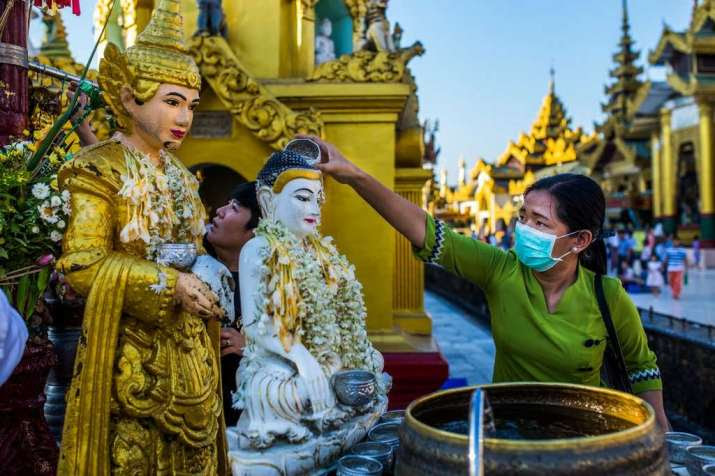 From hrw.org
Theravada Buddhism (school of the elders) is the oldest and purest form of original Buddhism.
Everyone strives for personal liberation. This requires no help from others. Everyone must therefore use their own power to try to reach enlightenment. There is no country in the world where daily life is as imbued with Buddhism as in Burma.

Despite sharing a 2,227-kilometer border with China, as well as sharing borders with Bangladesh, India, and Thailand, the majority Theravada Buddhist nation of Myanmar continues to claim zero confirmed cases of COVID-19. Ten patients in Myanmar are currently in quarantine awaiting results of tests to determine whether they have the virus.

Meanwhile, the Myanmar government has taken steps to quarantine all travelers who have visited China’s Hubei Province, France, Germany, Iran, Italy, South Korea, or Spain in the past 14 days, and will place travelers who have been elsewhere in China or to the United States in that time period under surveillance. However, experts have raised concerns that the lack of confirmed cases should not be taken to indicate that the nation is free of the novel coronavirus. The country’s de facto civilian leader, Aung San Suu Kyi, has offered optimism about the status of Myanmar: “Until now, no one in our country is infected with Covid-19,” she said in a televised address on Monday. (The Guardian)

Similarly, government spokesman U Zaw Htay told reporters that “COVID-19 is still not present in Myanmar.” He continued: “The lifestyle and diet of Myanmar citizens are beneficial against the coronavirus.” (New York Times)

Nonetheless, the government has canceled the traditional Burmese New Year celebrations and barred other mass gatherings until the end of April. “As the respiratory disease COVID-19 can be quickly spread in crowds, the public should not engage in ceremonies and festivals, including celebration of Myanmar’s traditional water festival and construction of mandats,” the president’s office said in a recent statement. (Coconuts)

Mandats are temporary stages constructed for music and dance performances around festival dates such as the water festival, which this year would have run from 13–16 April.

According to The New York Times, some Buddhist figures in Myanmar have been promoting non-medical remedies, including one who claimed that eating a lime and three palm seeds would keep the virus away. Another monk suggested consuming seven ground peppercorns. Some doctors in the country have also expressed optimism. Dr. Win Thandar Phyu, chief of North Okkalapa General Hospital in Yangon, offered: “Myanmar is still lucky because it’s a Buddhist country and senior monks are always praying to be safe.” (The New York Times) However, observers warn that a lack of rigorous testing might be the more likely reason that no cases have been detected thus far, and strong caution is likely needed at this time. “Such irresponsible statements clash with everything known about the coronavirus outbreak, defy reality, and only serve to give a false sense of security to the country’s people about the disease and their risks of infection,” said Phil Robertson, deputy director of the Asia division at Human Rights Watch. (The Guardian)

The British government this week issued an extraordinary travel advisory for Myanmar, urging British nationals against all but essential travel to the Southeast Asian nation, citing the possibility that the country may restrict travel without notice. The advice further calls on all British nationals to leave Myanmar if they are able to do so. “The worldwide coronavirus outbreak is expected to put significant pressure on Myanmar’s medical facilities. They may not be able to offer routine care,” said the British embassy in Yangon. (The Irrawaddy)

The COVID-19 outbreak began in China in late 2019 and, as of this writing, had infected 218,827 people around the world, with 8,810 deaths. In China, it had infected more than 80,000 and killed more than 3,000 people before strict travel restrictions helped slow its spread. Italy has reported more than 35,000 confirmed cases and 2,978 deaths. Iran has reported more than 17,000 cases and 1,135 deaths, with France, Germany, Spain, and the United States all quickly approaching these totals, with new cases increasing most days. Along with the high number of cases to Myanmar’s north, neighboring Thailand currently reports 272 confirmed cases, more than half of those added in the last week, and one death. India has confirmed 176 cases with three deaths, and Bangladesh has confirmed 14 cases and one death. Laos, which also shares a border with Myanmar, also currently reports no cases.

There are thousands of pagodas and people practise their religion everywhere in the streets.
They work in or on pagodas, give food to monks and make offerings to Buddhas.

Part of their often modest income is spent on purchasing gold leaf to decorate the Buddha statues. The idea behind this is that it will earn them merit (religious credit), ensuring that their next life will be a better one.