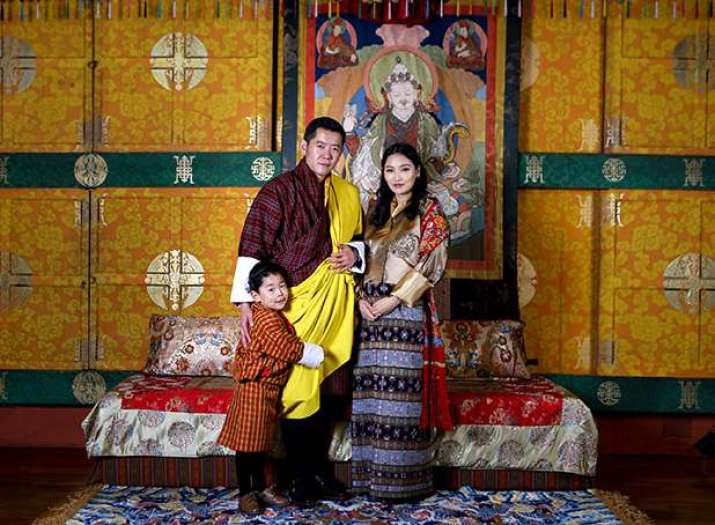 Their Majesties Jigme Khesar Namgyel Wangchuck, the Druk Gyalpo or “Dragon King” of Bhutan, the Queen Consort (Druk Gyaltsuen or “Dragon Queen”) Ashi Jetsun Pema, and Crown Prince Jigme Namgyel Wangchuck in February 2020. From kuenselonline.com
Bhutan is known as Drukyul which translates as “The Land of the Thunder Dragon”. Thus, while Kings of Bhutan are known as Druk Gyalpo (“Dragon King”), the Bhutanese people call themselves the Drukpa, meaning “Dragon people”.

The current ruler of Bhutan is Jigme Khesar Namgyel Wangchuck, the 5th Druk Gyalpo..King Jigme Khesar is the second-youngest reigning monarch in the world.

The Buddhist kingdom of Bhutan has announced the royal birth of a second child on 19 March to Their Majesties the Queen Consort (Druk Gyaltsuen or “Dragon Queen”) Ashi Jetsun Pema and Jigme Khesar Namgyel Wangchuck, the Druk Gyalpo or “Dragon King” of Bhutan, a press release from the Royal Office for Media stated on Thursday. The news came as the kingdom also reported its second confirmed case of COVID-19, a female American tourist who is the partner of the first case reported in Bhutan, an American male, since evacuated.

The news of the royal birth, a boy, follows soon after the official announcement made at the beginning of January that the royal couple were expecting a child.* The king and queen already have one son, the four-year-old Crown Prince Jigme Namgyel Wangchuck, who, according to yesterday’s statement, is “delighted to meet his younger brother.” The couple did not share a photo of their newest son or announce his name.

The birth announcement was also posted to the official Instagram accounts of the king and queen:

We are honoured to announce the birth of the second Royal Child of Their Majesties The King and Queen, a Prince, on the 19th of March 2020, corresponding with the 25th day of the 1st month of the Male Iron Rat year, in Lingkana Palace, Thimphu.

Her Majesty and the royal baby are in good health, and His Royal Highness The Gyalsey was delighted to meet his younger brother.

Their Majesties express their gratitude to the medical team, the Zhung Dratshang and to everyone for their well-wishes and prayers.

“While this remains a very happy occasion for the Royal family and the nation and people of Bhutan, their majesties wish to remind all Bhutanese to be mindful, responsible, and supportive to each other in the wake of the COVID-19 virus,” the Royal Office for Media stated. “Their Majesties have everyone whose lives have been affected by this global pandemic in their thoughts and prayers.” (Kuensel)

The new prince becomes second in line to the throne after his older brother.

“Our prince comes like a ray of sunlight when Bhutan—in fact the world—is going through a dark period, struck by a disease which is bringing societies to a halt,” the Bhutanese newspaper Kuensel said in an editorial for the occasion. “The Coronavirus is creating havoc across the world, introducing a new level of distress and forcing a fundamental social change in human behavior. He comes as a reminder that the human existence can’t avoid suffering but there is always hope around the corner.” (Kuensel

On 14 March, Bhutan reported that it’s only case of COVID-19 infection—a 76-year-old American tourist—had been evacuated to the United States. The American was flown out of the country by air ambulance, in coordination with the US embassy in New Delhi and at the request of his family members.** Although the repatriation of the patient meant that Bhutan had no confirmed cases of COVID-19, the prime minister of Bhutan announced on Friday that the American patient’s partner, who continues to receive medical treatment in Bhutan, has also tested positive for COVID-19, becoming the kingdom’s second confirmed case.

At the time of writing on 20 March, global novel coronavirus infections were reported to total 244,523, with 10,030 deaths so far confirmed. While the outbreak first emerged in China, as of Monday, the majority of coronavirus infections and fatalities have now occurred outside of mainland China, which has reported a death toll of 3,252 people, and 81,199 infections, according to official data from the Chinese health authorities. COVID-19 is believed to have first spread from an illegal wildlife market in the Chinese city of Wuhan, in central Hubei Province. The World Health Organization has estimated the mortality rate from the virus at 3.4 per cent, with the elderly and people with underlying health conditions considered most at risk.

Bhutan shares borders with two political and economic heavy-hitters China and India, which has so far reported 194 confirmed cases of COVID-19 and four deaths.

Bhutan is regularly ranked among the happiest countries in the world. With a population of just 770,000, according to government data for 2017, it is also one of the world’s smallest and least industrialized countries, yet it has significant experience in maintaining the delicate balance of managing economic growth in a sustainable manner, famously encapsulated in its conservative “Gross National Happiness” (GNH) approach to economic development.