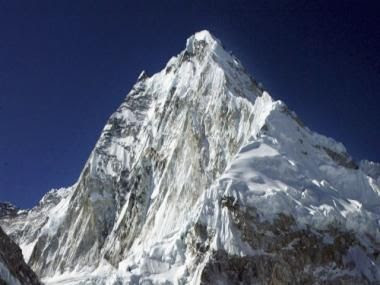 Mount Everest  Nepali: Sagarmāthā; Tibetan: Chomolungma Chinese:Zhūmùlǎngmǎ  is Earth’s highest mountain above sea level, located in the Mahalangur Himal sub-range of the Himalayas. The China–Nepal border runs across its summit point.  Its elevation (snow height) of 8,848.86 m (29,032 ft) was most recently established in 2020 by the Nepalese and Chinese authorities.

In 1865, Everest was given its official English name by the Royal Geographical Society, as recommended by Andrew Waugh, the British Surveyor General of India, who chose the name of his predecessor in the post, Sir George Everest, despite Everest’s objections.

Mount Everest attracts many climbers, some of them highly experienced mountaineers. There are two main climbing routes, one approaching the summit from the southeast in Nepal (known as the “standard route”) and the other from the north in Tibet.

In the backdrop of a long-running conflict over Mount Everest’s height, Nepal and China have jointly announced the revised height of the world’s highest peak as 8,848.86 metres €” 86 cm higher than what was recognised since 1954.

The announcement was made via a joint video conference by Nepalese and Chinese officials based in Kathmandu and Beijing respectively.

The Nepal government decided to measure the exact height of the mountain amid debates that there might have been a change in its height due to various reasons, including the devastating earthquake of 2015.

As per The Indian Express, this common declaration by both countries means that the two have shed their long-standing difference in opinion about the mountain’s height €” 29,017 feet (8,844 m) claimed by China and 29,028 ft (8,848 m) by Nepal. In feet, the new elevation is about 29,031 ft, or about 3 ft higher than Nepal’s previous claim.

According to the measurement done in 1954 by Survey of India, the height of Mount Everest is 8,848 metres, which as per The Wire report is the most commonly accepted height.

The exact height of Mount Everest had been contested ever since a group of British surveyors in India declared the height of Peak XV to be 8,778 metres in 1847, according to Business Standard.

In 2005, China’s measurement of 8,844.43 metres had put the mountain about 3.57 metres lower than Nepal’s (which followed the measurement given by Survey of India).

This is the first time Nepal conducted its own measurement of the summit.

Nepal government officials had told the BBC in 2012 that they were under pressure from China to accept the Chinese height and therefore they had decided to go for a fresh measurement to “set the record straight once and for all”.

The 2015 earthquake triggered a debate among scientists on whether it had affected the height of the mountain.

The government subsequently declared that it would measure the mountain on its own, instead of continuing to follow the Survey of India findings of 1954.

According to The Indian Express, there was also a third estimate. In 1999, a US team put the elevation at 29,035 feet (nearly 8,850 m). This survey was sponsored by the National Geographic Society, US. The Society uses this measurement, while the rest of the world, except China, had accepted 8,848 metres so far.

Tuesday’s announcement came after Kathmandu and Beijing sent an expedition of surveyors to the summit to calculate Everest’s precise height above sea level. Gyawali declared the findings of their surveys on a video call with his Chinese counterpart Wang Yi. “Everest is an eternal symbol of friendship between Nepal and China,” Gyawali said.

Meanwhile, Susheel Dangol, Nepal’s chief survey officer, head of the measurement project, said they were confident that this is the “most accurate height” of Everest, according to The Washington Post. “It was a huge responsibility on our part. It is a moment of great pride for us.”

Two-day Teaching on Introduction to Buddhism Held at Kullu