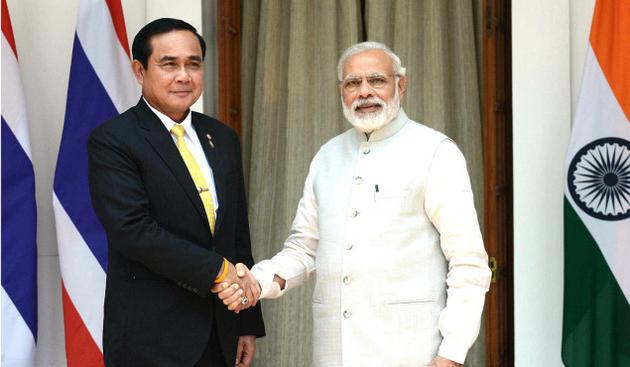 A diversified commercial engagement between India and Thailand would greatly benefit both the economies, Prime Minister Narendra Modion Friday said ample avenues for manufacturing and investment exist between both nations, which can pave way for regional economic prosperity.

Addressing a joint statement with his Thai counterpart Prayuth Chan-ocha, Prime Minister Modi said trade and commerce flows are an important lifeline of the interdependent world and raised the pitch for business stakeholders to take lead in tapping the emerging business opportunities in both countries.

“Excellency and I agree that a more diversified commercial engagement between us would not only benefit both our economies. It would also enable greater regional economic prosperity. In this context, we welcome the first meeting of the India-Thailand Joint Business Forum to be held later today,” he said.

“Alongside trade, there are also ample avenues for greater manufacturing and investment linkages. We see a particular synergy between Thai strengths in infrastructure, particularly tourism infrastructure, and India’s priorities in this field. Information Technology, pharmaceuticals, auto-components, and machinery are some other areas of promising collaboration,” he added.

Prime Minister Modi called for an early conclusion of a balanced Comprehensive Economic and Partnership Agreement and dubbed it as a ‘shared priority’ between India and Thailand.

“Prime Minister and I are fully aware that smooth flow of goods, services, capital and human resources between our economies needs a strong network of air, land and sea links. We have, therefore, prioritized completion of India-Myanmar-Thailand Trilateral highway; and early signing of the Motor Vehicles Agreement between our three countries,” he said.

The Prime Minister said connectivity is also an area of priority for India’s development, asserting that improving access to Southeast Asia from India’s Northeastern States would benefits people of both the countries.

“Stronger connectivity is essential not just for expanding bilateral trade ties. It also brings our people closer and facilitates enhanced science, education, culture and tourism cooperation. Next year, to commemorate the seventy years of establishment of our diplomatic relations, we will celebrate Festival of India in Thailand, and Festival of Thailand in India. This year, India is also celebrating one hundred and twenty-fifth birth anniversary of Dr. B.R. Ambedkar, the architect of Indian Constitution,” Prime Minister Modi said.

“India has always deeply appreciated the warmth and affection of the Royal Family of Thailand for India. Her Royal Highness Princess Maha Chakri Sirindhorn has been a frequent and very welcome visitor to India,” Prime Minister Modi said.

“We look forward to welcoming her in India again later this year. We also look forward to the honour of receiving His Royal Highness Crown Prince Vajiralongkorn in India at his earliest convenience,” he added.