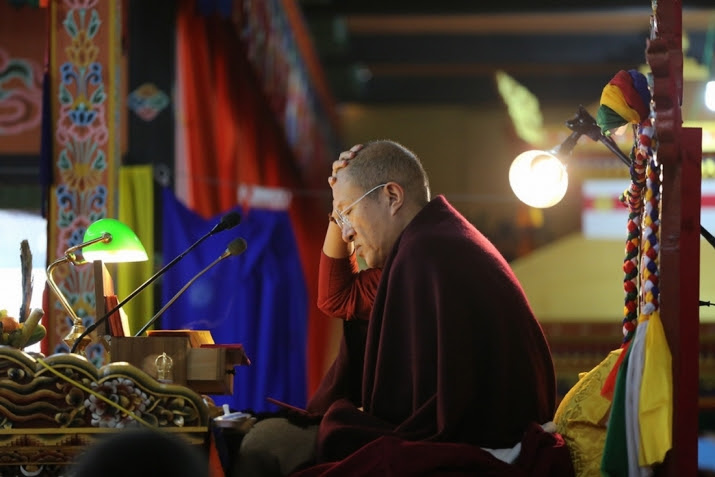 While still a teenager, Rinpoche built a small retreat center in Ghezing, Sikkim and soon began traveling and teaching around the world.
Renowned Bhutanese lama, author, and filmmaker Dzongsar Khyentse Rinpoche recently finished bestowing the oral transmission and empowerments of the Rinchen Terdzö (Treasury of precious termas) amid the harsh environs of the mountains of Takila in northern Bhutan, where he has spent the last five months engaged in the ceremonies seven days a week on behalf of tens of thousands of participants.

The event, which began in mid-February (although preparations were underway for some weeks beforehand), was organized by the respected Bhutanese master Khenpo Karpo Rinpoche, the Druk Odiyana Foundation (which he founded in 2004), and hundreds of committed monks, who prepared and distributed offerings among the throngs of attendees, as well as performing rituals and compiling ceremonial materials for the participants, many of whom went to great personal sacrifice in order to attend. The ceremony was held at the site of the world’s largest statue of the 8th century Buddhist master Padmasambhava, also known as Guru Rinpoche, which contains a three-story monastery and whose construction was initiated by the Druk Odiyana Foundation in 2008.

Among the dignitaries in attendance to receive the transmission were the king of Bhutan, Jigme Khesar Namgyel Wangchuck, the prime minister of Bhutan, Tshering Tobgay, and senior members of the Bhutanese monastic community.

The Khyentse Foundation, a non-profit organization founded by Rinpoche in 2001 to support all traditions of Buddhist study and practice, observed that, “Rinpoche’s commitment to meticulously completing these ceremonies is part of his lifelong dedication to preserving lineages and ensuring that authentic Buddhadharma will be available for future generations. . . . Just as Rinpoche received the empowerments from his own root guru, Kyabje Dilgo Khyentse Rinpoche, and his grandfather Kyabje Dudjom Rinpoche, a small group of tulkus from different lineages are receiving the empowerments so that one day they may confer them on their own disciples.”

The Rinchen Terdzö is one of the Five Great Treasures of the great teacher Jamgön Kongtrul Lodrö Thaye (1813–99), and is a compilation taken from all the termas (teachings hidden by Guru Rinpoche and his consort, Yeshe Tsogyal, in the earth and in the minds of disciples, to be revealed at an appropriate time by tertöns, or “treasure revealers”) that had been discovered up to his time. Such is its complexity, the oral transmission and empowerments of the Rinchen Terdzö take from four to six months to complete.

The Khyentse Foundation noted that despite the lengthy and complex nature of the Rinchen Terdzö, which had led some devotees to believe that Rinpoche would bestow the transmission on this occasion only, he intends to repeat the full ceremony in India at a future date under circumstances more suitable for participants traveling from overseas.

Rinpoche has written and directed three award-winning films: The Cup (1999), Travellers and Magicians (2003), and Vara: A Blessing (2013), and is the author of the books What Makes You Not a Buddhist (Shambhala, 2007) and Not for Happiness: A Guide to the So-Called Preliminary Practices (Shambhala, 2012).Rinpoche continuously travels all over the world, practicing and teaching the Dharma.