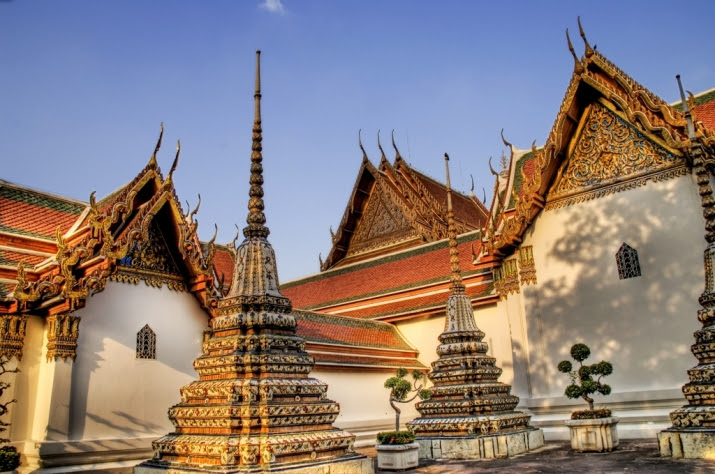 Thai massage draws significant influence from India’s ancient Ayurvedic traditions of medical practice.  Ayurvedic medicine, also a holistic form of healing, plays an integral role in the practice of both Hinduism and Therevada Buddhism. Monks and similar practitioners of healing transmitted Ayurvedic techniques to Thailand some 2,500 years ago, thus giving birth to the wonderful phenomenon that is Thai massage.

The practice of traditional Thai massage—actually just one aspect of the ancient Thai science of healing—is poised to become a key component of Thailand’s health care industry, with a particular focus on the elderly. The move into the modern medical system, part of a new government initiative, is being led by the WatPo Thai Traditional Medical and Massage School, which is headquartered in Bangkok at the historic Buddhist temple complex of Wat Po, known as the birthplace of traditional Thai massage.

“Many problems we face cannot be cured by Western medicine, especially in elderly healthcare,” said the school’s manager Serat Tangtrongchitr. “We need to balance the body and the mind in order [for the elderly] to lead a normal life as [far as] possible. [The] Thai Ministry of Public Health feels this is [an] important and cheap way to help people around [the] country.” (IDN-InDepthNews)

The school is working with Thailand’s Ministry of Public Health to provide traditional Thai massage at hospitals and clinics across the kingdom. The Thai government is expanding smaller health care centers in provincial areas away from larger urban centers and aims to ensure that Thai massage forms a major component of treatments available to the public. Serat hopes that by the end of this year, the school will be working with Thailand’s prestigious Chulalongkorn University to incorporate Thai massage therapy into elderly health care through a jointly run specialized clinic within the university’s campus.

Thai massage, sometimes known in Thai as “yoga massage” as the practice can be considered a form of assisted yoga, is part of an ancient healing system that combines acupressure and energy-balancing techniques based on Indian Ayurvedic medicine and yoga postures. An Indian-born Ayurvedic doctor named Jivaka Kumar Bhacca, who lived during the time of the Buddha and is believed to have treated him, is widely considered to be the founding father of traditional Thai medicine and massage.

In more traditional settings, Thai massage also has a spiritual aspect that incorporates the Buddhist practices of mindfulness and loving-kindness that can carry the physical therapeutic treatment to a deeper, more focused level. Rather than rubbing the muscles, Thai massage techniques aim to compress, stretch, and rock the body to clear blockages and relieve tension, and to facilitate energy flow and circulation by stimulating pressure points.

“When it came [to Thailand], it had a mixture of Ayurveda, Chinese medicine, and local herb and local knowledge that developed into Thai traditional medicine,” Serat said. (IDN-InDepthNews)

The existing school at Wat Po was started as a private institution by Serat’s grandfather Kamtorn Tangtrongchit in 1955, although its antecedent was first established in 1832 as Thailand’s first university. It addition to massage, the school also teaches traditional Thai medicine, pharmaceutical science, and midwifery. The school, which also operates training centers outside of Bangkok, offers basic one-week and one-month courses for novices, after which those who are interested in pursuing the practice at a higher level can follow more advanced programs.

“In [the initial] training we start with orientation, talking about pressure points, anatomy of [the] body, which part of the body you are supposed to touch, which not,” said massage teacher Sompit Pitasingha, who has been a teacher for 25 years. “We start softly with the body and then go to toes and legs.” (IDN-InDepthNews)

Serat noted that most of the school’s trainees were already working in the country’s burgeoning spa industry and many of them hoped to advance their careers into more therapeutic fields, adding, “We also have western doctors who come here to learn Thai massage to see if they can incorporate it in their practice.” (IDN-InDepthNews)

Wat Po is one of the oldest temples in Bangkok, existing before the city became the capital of modern Thailand, and is one of the country’s most popular tourist attractions. The complex is perhaps best known for the imposing 150-foot-long gilded statue of the Buddha in the main chapel that dates to 1832 and lends Wat Po its English-language moniker the Temple of the Reclining Buddha. More than 1,400 stone inscriptions and illustrations can be found on the walls of buildings in the complex, some of which serve as instructions and references for Thai massage therapists. In December 2011, UNESCO recognized the value of this ancient heritage, by including the inscriptions as part of its “Memory of the World” project, which lists library collections and archival works of historical significance.Thai massage is, in fact, yoga for those of us who are inherently unmotivated.