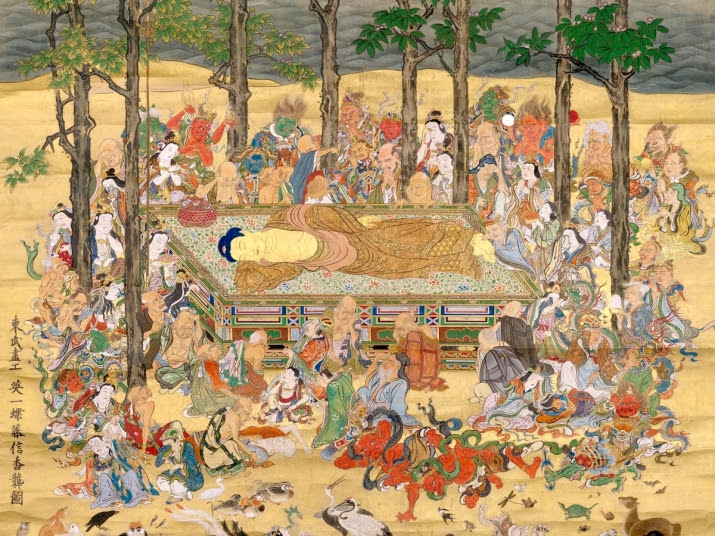 Detail of Nehan zu (The Death of the Historical Buddha) (1713) by Hanabusa Itchō. From mfa.org

The Museum of Fine Arts (or MFA) in Boston, Massachusetts, is the fourth largest museum in the United States.

The Museum of Fine Art Boston (MFA) in Massachusetts is offering visitors a unique opportunity to observe the ongoing conservation of an iconic 18th century Japanese scroll painting—Nehan zu(The Death of the Historical Buddha) by Hanabusa Itchō. The live exhibition, titled “Conservation in Action: Preserving Nirvana,” features a team a team of two to six conservators from the MFA’s Asian Conservation Studio and the Smithsonian’s Freer Gallery of Art, who will work on the masterpiece in full view of visitors, with scheduled periods for interaction with the public.
Painted in 1713, The Death of the Historical Buddha, depicting Shakyamuni Buddha’s parinirvana, is one of the most important works of Japan’s Edo period (1603–1868). The hanging scroll, some 4.8 meters tall by 2.3 meters wide, is believed to have been displayed annually for more than 150 years at the no-longer-extant Zen Buddhist temple Ginsoin in what is now Tokyo. The Death of the Historical Buddha was last on display at the MFA in 1990. 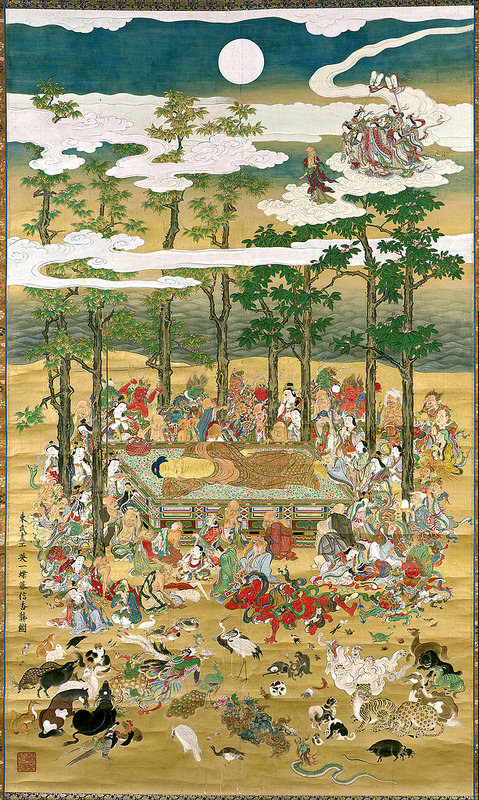 Hanabusa Itchō (1652–1724), born Taga Shinkō in Osaka, was a painter, calligrapher, and haiku poet. He initially studied Kanō painting but subsequently decided to pursue his own style, which would come to be known as the Hanabusa school. In 1698, he was exiled to the island of Miyake-jima for parodying one of the shogun’s concubines in a painting. He returned to Edo (present-day Tokyo) from exile in 1710, when he formally took the name Hanabusa Itchō. He is best known for his satiric scenes of everyday urban life in Edo in a style between the Kanō and ukiyo-e. Hanabusa studied poetry under the master Matsuo Bashō, and was the teacher of the later painter Sawaki Suushi.
According to the MFA’s head of conservation Jacki Elgar, this is the first time in the museum’s history that a work undergoing restoration has been open to the public in this way. “It’s nerve-wracking enough for conservators to be on view, but the painting itself is pretty stable,” she noted. “So it became the best candidate for this, as the risk I felt in having it on view was quite small in the sense of damage and people watching the whole operation.” (Hyperallergic)
The elaborate conservation process involves completely dismantling and then reassembling the scroll. Some parts of the original mount will be reused, while heavily damaged parts will be replaced with a custom woven reproduction of the original mounting silk produced by traditional weavers in Kyoto. The painting also features the original ornate gilt metal fittings carved with mythical lions, crafted the 18th century by the renowned metalworker Yokoya Sōmin, a close friend of Itchō. The public restoration is scheduled to continue until 16 January 2017.
“Itchō is wonderful in the way he portrays the group mourning Buddha’s loss,” Elgar observed. “It’s not only bodhisattvas and his disciples, but even Hindu deities. He actually portrays 44 different species of animals—from a bat to an insect to wild boars—coming in and grieving. There is an elephant on its back, and you can see the sorrow because the elephant doesn’t really understand what’s going on. Whereas the bodhisattvas are more serene; they look sad, but it’s not this anguish you see on several of the other figures. Coming down from the sky is his mother, Māyā, and she has her sleeves in front of her face because she’s weeping.” (Hyperallergic) 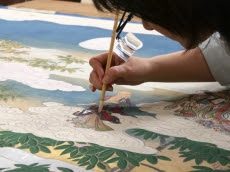 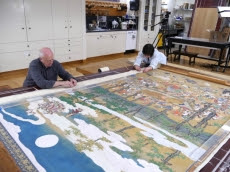 Founded in 1870 and opened in 1876, the MFA is the fourth largest museum in the United States. The museum, which moved to its current location in 1909, contains one of the most comprehensive collections in the world, comprising more than 450,000 works of art. With more than 1 million visitors a year, it ranked as the 55th most-visited art museum in the world as of 2014. The MFA’s sister museum is the Nagoya/Boston Museum of Fine Arts in Japan, which opened in 1999.The Museum of Fine Arts holds one of the most comprehensive collections in the world, and possesses materials from a wide variety of art movements and cultures. The museum maintains one of the largest online databases in the world, with information on over 346,000 items from its collection, accompanied with digitized images.
Share this...