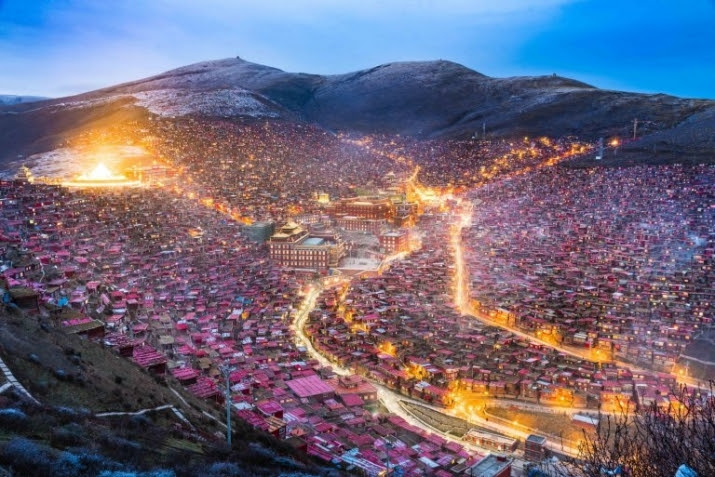 Among the green rolling hills in the Larung Gar Valley in China, the last thing you would expect to see in the countryside are thousands of red wooden huts that have been built in a massive cluster.

Despite its secluded location it is home to the Larung Gar Buddhist Academy, the world’s largest Buddhist settlement.
The authorities in China’s southwestern Sichuan Province are reportedly planning a major reduction of the burgeoning monastic population at the famed Larung Gar Buddhist Academy in the Larung Valley near the town of Sertar, Garze Prefecture. The reported decision follows similar moves in 2001, when state authorities organized a mass eviction of residents from the institute, and late last year, when further evictions were accompanied by an order to reduce admissions to curb the rapid growth of the monastic population.

Situated in the traditional Tibetan region of Kham, Larung Gar Buddhist Academy was founded in 1980 by the highly respected teacher Khenpo Jigme Phuntsok (1933–2004), a lama of the Nyingma tradition, one of the four major schools of Tibetan Buddhism. With some estimates putting the population at as many as 40,000 monks and nuns, the institute is widely considered to be the largest center of Buddhist learning in the world.

“Last year, 600 members of this center were ordered to leave, and they returned to their hometowns. About 400 members aged 60 and older were also asked to leave, and they left as well,” an anonymous source told Radio Free Asia, a private, non-profit international broadcaster created by the US government. “This year, the authorities are talking about 1,200 members who will have to leave, and it is said that China has now issued a document saying that only 5,000 monks and nuns will be allowed to remain [at Larung Gar].”

Government officials were marking houses that obstructed the passage of firefighting vehicles or the construction of roads, according to the source, who added that dwellings targeted for demolition would be torn down by force if necessary. “About 60 to 70 per cent of the houses of monks and nuns are being marked for demolition,” the source said, noting that the order to reduce the number of residents at Larung Gar did not originate at the county level, “but comes from higher authorities,” with China’s president Xi Jinping taking a personal interest in the matter. (Radio Free Asia)

In 2001, government authorities had become unsettled by the rapid population growth at the institute. Alarmed by what they termed “splittist” activities, and particularly unnerved by its growing popularity among ordinary Han Chinese—at the time, Han Chinese at the academy numbered more than 1,000—the authorities sent in thousands of security personnel and laborers, who evicted all but 1,400 of the monastery’s 9,000 inhabitants and razed 2,400 dwellings. Many of the nuns and monks turned out from Larung Gar made their way southwest to the more remote Yarchen Gar monastic community, still largely hidden from the outside world by its geographical remoteness and political restrictions put in place by the government. Because of these restrictions, most of the monks and nuns at Yarchen Gar are not officially recognized and live in fear of eviction.

The site of the Larung Gar Buddhist Academy was chosen by Khenpo Jigme Phuntsok because of its historical connection to the Vajrayana tradition. It is said that His Holiness the first Dudjom Rinpoche, Dudjom Lingpa (1835–1904), stayed here with his 13 disciples. The institute was conceived as an independent center of study that would help revitalize the Dharma and revive the study and practice of Tibetan Buddhism following the devastating impact of China’s Cultural Revolution (1966–76), during which Tibetan Buddhism was suppressed and thousands of monasteries were destroyed. While the academy initially had fewer than 100 students, the monastic population grew rapidly in the years that followed.

The institute has played a key role in revitalizing the teachings of Tibetan Buddhism since China eased restrictions on religious practice in 1980, and has become renowned for the quality of both its religious and secular education. English, Chinese, and Tibetan languages and modern computer studies are taught alongside a traditional non-sectarian Buddhist curriculum. About 500 khenpos—holders of doctoral degrees in divinity—have studied at Larung Gar Buddhist Academy.Despite its remote situation, Larung Gar evolved from a handful of disciples to be the largest Buddhist settlement in the world.

It attracts a mix of students from ethnic Chinese students to pupils from Taiwan, Hong Kong, Singapore, and Malaysia, who attend separate classes taught in Mandarin, while larger classes are taught in Tibetan.