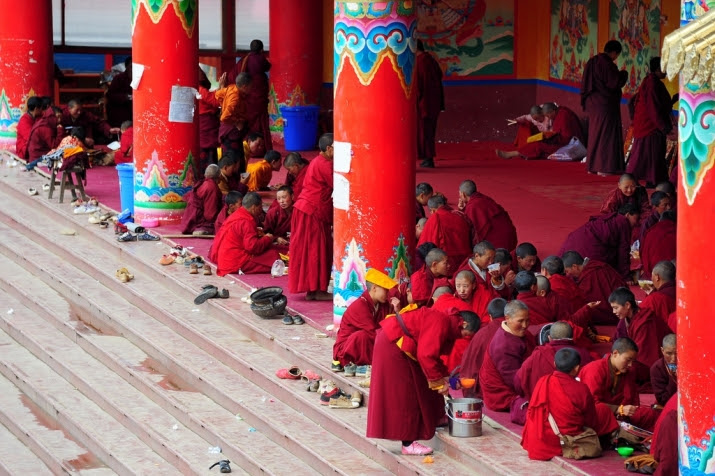 Nuns at Larung Gar. From flickr.com

Nuns at Larung Gar Buddhist Institute in Sertar County, Garze Tibetan Autonomous Prefecture, are pushing harder for the recognition of their practice to be reflected in equal status to their male counterparts.

Larung Gar is the largest Buddhist academy in the world and was founded by the Nyingma master Khenpo Jigme Phuntsok (1933–2004) in 1980. He chose the site for its historical connection to the Vajrayana tradition, which claims that the first Dudjom Rinpoche, Dudjom Lingpa (1835–1904), stayed in the area with his 13 disciples.

According to Victoria Knobloch in an article for Buddhistdoor, “One part of the institute is Pema Khandro Duling Nunnery, home to 3,500–4,000 nuns from all over Tibet. Here nuns may study for the khenpo degree—a doctoral degree in divinity—which has only just become possible for female monastics.” This female equivalent is called a khenmo degree. Now, women at the institute are taking advocacy to the next level, according to a report by Benjamin Haas for Agence France-Presse (AFP), holding study sessions on feminism and studying what some conservative-minded monks call a “Western concept.”

Jetsunma Tenzin Palmo and Karma Lekshe Tsomo are the two most prominent faces of Tibetan Buddhist feminism and have noted on several occasions that prominent male masters have offered moral and practical support for women’s education. However, in an interview with Buddhistdoor, Tenzin Palmo said that while male authority figures are extremely accepting of the need for more education for female monastics, there is much greater hesitation to recognize the ecclesiastic rank of “fully ordained nun”—bhikshuni—for women. Tens of thousands of monks hold the title of bhikshu, which, like the bhikshuni title, has existed since the days of the Buddha himself. However, the bhikshuni title was never transmitted into Tibet under the Mulasarvastivada Vinaya.

The 17th Karmapa, Ogyen Trinley Dorje, famously told world media last year that he was planning practical measures to restore the order of nuns in the Tibetan tradition: “No matter how others see it, I feel this is something necessary. In order to uphold the Buddhist teachings it is necessary to have the fourfold community (fully ordained monks [gelongs], fully ordained nuns [gelongmas], and both male and female lay precept holders). As the Buddha said, the fourfold community are the four pillars of the Buddhist teachings. This is the reason why I’m taking interest in this,” Lion’s Roar reported him as saying.

This is a sentiment that Xinde Shijiamouni, a female practitioner at Larung Gar Buddhist Institute, agrees with. “If you look at Buddhist law, you can see both genders should be equal,” she told AFP. “But many on the outside don’t understand the dharma, and many on the inside choose to ignore it.”

Tibetan monks are still coming to grips with this surge of interest in gender equality. Not all welcome it with open arms. “The ideas of ‘gender equality’ and ‘feminism’ are entirely foreign,” a 45-year-old monk called Wangchuk told AFP. “Tibetan Buddhism has generations of history and tradition, we don’t need outsiders interfering with that.”

However, a younger lama called Pema, 23, said: “It’s good for the nuns to study gender equality, the world right now is too unequal. We need more people working to make life fairer.” (AFP)

Many nuns at Larung Gar advocate that only their example can give weight to their theoretical arguments, and have set up an outreach program to educate Tibetan women in the surrounding area about female health and hygiene. “All religions teach compassion and helping others, we’re helping women to improve their health,” spoke up one nun on the condition of anonymity. “That’s not a controversial issue.” (AFP)

We need to teach women to stand up for themselves.” (AFP)