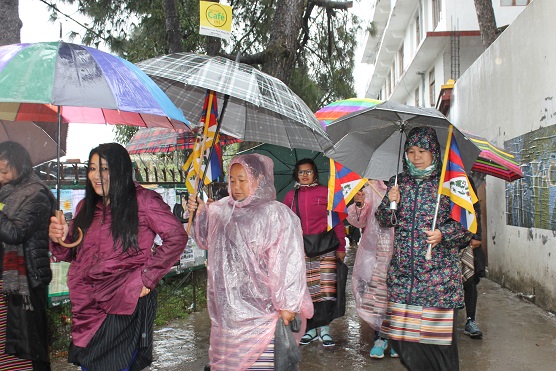 The association condemned the recent Chinese government initiative to make a database of living Buddha, calling it a “politically motivated move”. Yangchen said, “They even brought out 870 government – certified reincarnations in Mainland China by the Buddhist Association of China. The Tibetan Women’s Association strongly oppose the Chinese plan to mislead the world Buddhist population and will not accept the list as it does not feature the name of Tibetan spiritual leader, His Holiness the Dalai Lama. Moreover, the Communist China does not believe in religion and according to them, the religion is poison. Therefore, China neither has the legitimacy nor credibility in the spiritual matters of Tibet.”

“As we commemorate the 57th National Tibetan Women’s Uprising Day, TWA pays tribute to the brave Tibetan Women from the three provinces of Tibet, who sacrificed their lives for the cause of Tibet. We, the present generation of Tibetan women inside and outside Tibet remain indebted to these great women and we shall keep their spirit alive and work towards fulfilling their dreams of a Free Tibet” said Yangchen recalling the sacrifice of the Tibetan women who died on the fateful day in 1959 at Lhasa and others who laid their lives since.

The association further urged the Chinese President Xi Jinping to resume dialogue with the representatives of His Holiness the Dalai Lama to resolve the political issue on Tibet.

The Tibetan Women’s Association headquartered in Dharamshala was established in 1984. Currently, the association operates through 56 regional chapters in India and overseas with over 17,000 members.