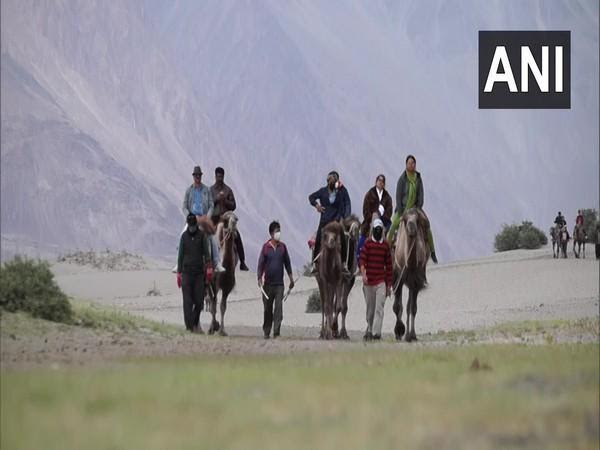 Ladakh has been witnessing increased development over the past two years as the government has implemented several development projects that aim to build a green and prosperous future for its residents.

New Delhi is focusing on developing Ladakh frontier region that has been neglected for years with new tunnels and roads being carved out in the toughest terrains of the Himalayan region, reported Saudi Gazette.

The people of Ladakh had sought UT status way back in 1949 in order to address the development needs of the area. The region got the status on August 5, 2019 with the government abrogating Article 370 in Jammu and Kashmir and bifurcating the state into two Union Territories.

Work on infrastructure projects like roads and tunnels has gained pace. Even the remotest border villages are now being connected to the telephone network and the Internet through fiber-optic cables powered by solar electricity generation units, reported Saudi Gazette.

The UT administration has chalked out an ambitious plan for ensuring the all-around development of the region and its people.

Several development projects have been kick-started by the government including the Alusteng-Drass-Kargil-Leh transmission system, which was completed in February last year. The move helped Ladakh to be linked to the national grid ensuring an uninterrupted reliable, quality power supply to the region, the report said.

In February 2019, Indian Prime Minister Narendra Modi had inaugurated the Dah hydroelectric project and had dedicated the 220 KV transmission for overall electrification for providing sufficient electricity for each household.

Approximately, Rs 60 billion has been allocated for the development of Ladakh for the fiscal year 2020-21. Nine projects with an outlay of Rs.214.4 billion were transferred to the UT of Ladakh.

The Colonel Chewang Rinchen Bridge has been constructed by the Border Roads Organization (BRO) in a record time of one month, which provides all-weather connectivity in the region.

In addition, 82-meter Span Motorable Bridge over River Shayok at Rongdo in Nubra has been opened for the public. The Ladakh administration has formulated new rules under which jobs would be reserved exclusively for locals, reported Saudi Gazette.

India’s Renewable Energy Ministry has also drawn up a plan to scale a 23,000 MW grid connecting the mega solar project in Ladakh with a 7,500 MW package forming the first part of a larger project.

PM Modi had also inaugurated a plan for the first central university in Ladakh with a Centre on Buddhist Studies helping over 10,000 Ladakhi students.

He had also vowed to make Ladakh a carbon-free region in the coming years with the start of the Ladakh Greenhouse project targeted to increase the availability of vegetables throughout the year.

“Cultural tourism” which is one of the key development planks for the area has been given a boost with homestay at monasteries along with eco-tourism and ecological activities like bird watching, wildlife safaris.

Indian Defence Minister Rajnath Singh has assured making functional the Siachen Glacier for tourists, opening some more border villages for tourism, construction of strategic roads, development of border villages, and movement of Nomads for grazing in the areas located close to the Line of Actual Control (LAC) in Ladakh, the report said

The Indian federal government approved on September 23, 2019, the establishment of a new medical college in Leh district of the newly created Ladakh Union Territory, following receipt of requests from the locals about improving healthcare facilities in the Himalayan region, the report added.

The Cabinet also approved the creation of one post of managing director for the corporation in the pay scale of ₹144,200- ₹218,200 level,” the government said in a press release. “The authorized share capital of the corporation will be ₹25 crore and recurring expenditure will be around ₹2.42 crore per year. It is a new establishment. Presently, there is no similar organization within the newly formed UT of Ladakh.”

The government said it will result in inclusive and integrated development of :Ladakh.

“It [will] increase domestic production of goods and services and will facilitate their smooth supply. Thus, the approval will help in realizing the goal of Atmanirbhar Bharat,” the statement read.

The government has also approved a Production Linked Incentive (PLI) Scheme for specialty steel in an initiative aimed at boosting domestic manufacturing and exports and cutting down the import burden for the sector, Information and Broadcasting Minister Anurag Thakur said. The scheme will be applicable for five years from 2023-24 to 2027-28.

“With a budgetary outlay of ₹6,322 crores, the scheme is expected to bring in investment of approximately ₹40,000 crores and capacity addition of 25 metric tonne (MT) for speciality steel. The scheme will give employment to about 525,000 people, of which, 68,000 will be direct employment. Speciality steel has been chosen as the target segment because out of the 102 million tonnes steel produced in India in 2020-21, only 18 million tonnes of value added steel or speciality steel was produced in the country,” said the government statement.