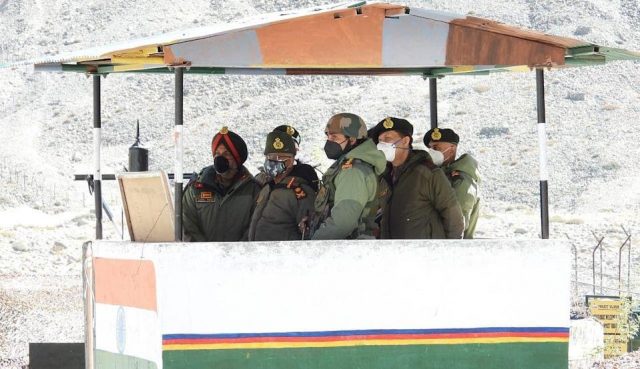 Indian and Chinese troops have disengaged from the Gogra area in eastern Ladakh after the 12th round of talks.

Indian and Chinese troops have disengaged from the friction point in the Gogra area of eastern Ladakh, where the two sides were locked in a tense military standoff since May 2020, the Indian Army has said.

In a statement, the Army revealed that India and China completed the disengagement in Gogra on 4 and 5 August.

India and China had reached an understanding on disengagement in the Gogra area during the 12th round of corps commander-level talks held earlier this week at the Chushul-Moldo meeting point.

“As per the agreement, both sides have ceased forward deployments in this area in a phased, coordinated and verified manner. The troops of both sides are now in their respective permanent bases,” the statement reads.

The development comes after the People’s Liberation Army refused to pull back its troops and equipment from the Gogra and Hot Springs areas during the 11th round of talks with India held in April.

In May last year, the Chinese had deployed a large number of troops and equipment, including tanks and artillery guns, in this area. India had responded with its own deployments of troops and heavy equipment.

Since then, the two sides had built shelters and other temporary structures in the area to house soldiers and equipment.

“All temporary structures and other allied infrastructure created in the area by both sides have been dismantled…and the landform in the area has been restored…to pre-standoff period,” the Army’s statement says.

India and China will continue to hold discussions for disengagement at other friction points along the Line of Actual Control in the western sector, such as the Depsang Plains in northeastern Ladakh and Chumar in the southeastern part of the union territory, the statement adds.

Earlier this year, India and China had pulled back troops from the north bank of the Pangong Lake and the Kailash Range.

Although China has vacated the area it had occupied on the north bank of Pangong Tso, its troops and equipment remain deployed in depth areas.

Satellite imagery from 11 May shows that Chinese troops are present in Rutog County, located on the Xingiang-Tibet (G219) Highway close to the eastern end of the Pangong Lake. Rutog, which is linked to both Pangong and Spanggur Lakes (south of Pangong Tso, east of Kailash Range) by road, serves as a major base for the People’s Liberation Army along the Line of Actual Control in this sector.

The People’s Liberation Army can move these troops rapidly to forward positions or deploy them against India using its road network.

The satellite image, posted on Twitter by open-source intelligence handle @detrasfa_, shows multiple rows of prefabricated living structures, indicative of the presence of a significant number of Chinese troops at the base.

A large motor pool, consisting of different types of vehicles, including those used by support and offensive units, can be seen in the imagery.

Among other things, the satellite image also shows a large number of camouflaged positions, which could be hosting suppliers of weaponry.

Earlier, reports had revealed that China had built structures between Kangxiwar, located on the G219 highway just north of Aksai Chin, and Rutog.

At Kangxiwar and Rutog, the PLA has brought in 10,000 additional temporary troops to support the 10,000 permanent Chinese troops deployed at these locations, a report in India Today says, citing an intelligence estimate.

The Indian Army continues to maintain its posture on the friction sites in eastern Ladakh and a large number of troops, which had been moved back as part of the disengagement in the Pangong Lake area, remain in depth areas on the Indian side to deter Chinese misadventures.

Work on new roads and bridges in Ladakh also continues despite China’s aggressive maneuvers in the area over the last one year. The Border Roads Organisation, responsible for the construction and maintenance of roads in India’s border areas, appears to have improved its performance amid tensions along the Line of Actual Control.

In Eastern Ladakh, India and China have two mutually agreed disputed areas, Trig Heights and Demchok, and 10 areas of differing perception. Officials said that since the stand-off last year, additional five friction points have emerged. These are Km 120 in Galwan area, Patrolling Point (PP) 15 and PP17 and Rechin La and Rezang La on the south bank of the Pangong Tso, the second official said.

The 12th round of military talks took place over two weeks after External Affairs Minister S Jaishankar firmly conveyed to his Chinese counterpart Wang Yi that the prolongation of the existing situation in eastern Ladakh was visibly impacting the bilateral ties in a “negative manner”.