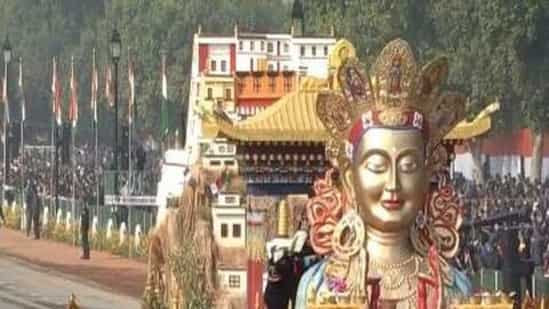 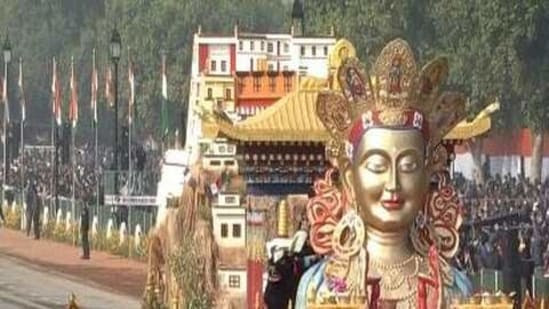 The Ladakh tableau at the R-Day parade (ANI)

The young Union Territory of Ladakh on Tuesday made its debut in the Republic Day parade on the Rajpath with a beautiful tableau depicting the iconic Thiksey  Monastery and its cultural heritage.

Until 2019, Ladakh was a region of the Indian-administered state of Jammu and Kashmir. In August 2019, the Parliament of India passed an act by which Ladakh became a union territory on 31 October 2019.

Located to the North of the Indus River on a hilltop, less than 20km from Leh town, Thiksey Monastery built in 1430 AD belongs to the Gelukpa Order of Buddhism.

India displayed its military might and vibrant cultural heritage on the Rajpath on the 72nd Republic Day, with the ceremonial event this year being drastically scaled down in view of the COVID-19 pandemic.

There was a palpable excitement among members of the Ladakh contingent, who received applause from many audience when their float rolled down the ceremonial boulevard.

‘The Ladakh tableau highlights the vision for Ladakh to be carbon-neutral, and exemplary for the world. It also showcases the Indian Astronomical Observatory, located in Hanle near Leh, one of the world’s highest sites for optical, infrared an gamma-ray telescopes,’ according to the tableaux details shared by the officials.

Ladakh region is known for its unique cultural and beautiful architectural heritage and vibrant costumes and festivals and delicious food, besides scenic beauties dotted with monasteries.

The tableau depicted an avatar of Lord Buddha in the front portion of the float and the Thiksey  monastery in the rear side. A group of artists from the contingent, colourful traditional Ladakhi ‘gunchas’, performed on folk music, while accompanying the float.

‘Our tableau was showcased for the first time on Rajpath in the grand parade. We had struggled to get a separate UT status and that aspiration was fulfilled in 2019 and we had celebrated it in Ladakh. And, now as an independent UT, with our own identity, we took part in the ceremonial event. We are feeling very happy,’ said Diksit Palmo, who hails from Leh.

She is one of the five women in the 11-member contingent led by a government official.

Palmo says she also was part of the contingent of the then state of Jammu & Kashmir in 2015, but this time, ‘our identity is our own’.

Thiksey  Monastery is located on top of a hill in Thikse in Leh district and is one of the most-visited tourist sites in the region.

Rinchen Dolma, another member of the contingent, said, ‘We are proud to represent our region with our own name — Ladakh, and not as a constituent of J&K, which also has a different identity now.’ A total of 17 states and UTs were represented on the Rajpath in this year’s parade through their vibrant tableaux, besides that of various ministries and the defence arm.

Jammu and Kashmir, however, did not figure in the tableaux list released by the government earlier.

Sarabjeet Kaur, a Jammu native, felt sad that the new UT of J&K was not represented this year during the Republic Day parade.

‘I am part of the Ministry of Culture’s tableau which depicted the heralding of 75th year of our Independence Day, and I am happy to be part of it. But, a bit unhappy that my state, now a UT, is not there in the tableaux parade,’ said Kaur, an artiste who will depict herself as a Kashmiri woman, dressed in a traditional costume while accompanying the ministry’s tableau.

The Ministry of Culture’s tableau also carries a giant bust of freedom fighter Netaji Subhas Chandra Bose and men and women dressed as INA soldiers, and the models of the old Parliament House and the proposed new Parliament building here.