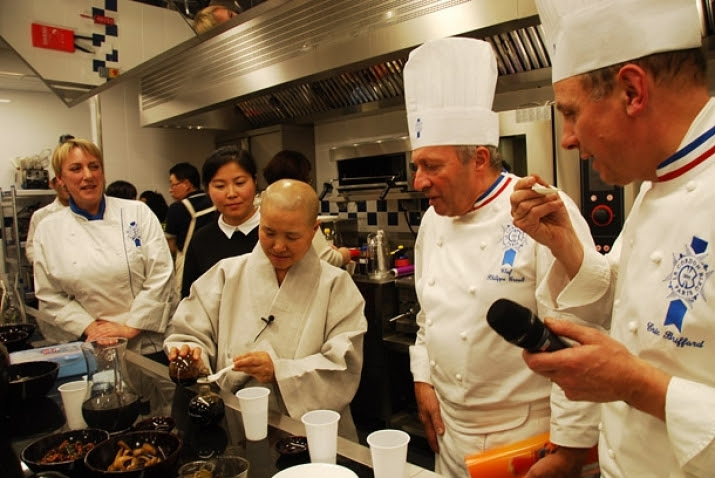 Ven. Seonje shows off Buddhist cuisine to chefs at Le Cordon Bleu. From koreajoongangdaily.joins.com
Buddhist cuisine is an East Asian cuisine which is followed by monks and many believers from areas historically influenced by Chinese Buddhism. It is vegetarian or vegan, and it is based on the Dharmic concept of ahimsa (non-violence). Vegetarianism is common in other Dharmic faiths such as Hinduism, Jainism and Sikhism as well as East Asian religions like Taoism. While monks are vegetarian year-round, many believers follow the Buddhist vegetarian diet temporarily, similar to Christian Lent.

France and Korea this year marked the 130th anniversary of the establishment of Franco-Korean relations. To celebrate the occasion, Venerable Jaseung, president of the Jogye Order of Korean Buddhism, visited Paris with her cultural promotion team from 25 October–9 November. On 28 October, the bhikkhuni Ven. Seonje, considered a maestro of temple cooking, delivered a special lecture on Buddhist cuisine attended by nearly 100 students and teachers at the prestigious French cooking and hospitality academy Le Cordon Bleu at an event titled “Voyage au pays du Buddhism Coreen.”

“When we prepare food in temples, we view nature and ourselves as one,” said Ven. Seonje. “The Buddhist scriptures say, ‘Bees do not hurt the flowers when they collect honey from them.’ Buddhist cuisine goes along the same line. We cook using nature’s products but never hurt nature itself.” (Korea JoongAng Daily)

“This soy sauce has been matured for 20 years,” said Ven. Seonje as she handed over samples to students. “Try it.” The students who smelled and tested the samples said that they enjoyed the rich taste of the aged soy sauce. (Korea JoongAng Daily)

“I’ve tasted various kinds of soy sauce in Japan and China, but none were as tasty as this,” said Philippe Groult, assistant culinary arts director at Le Cordon Bleu. “For a second, I wondered if this really was soy sauce because it wasn’t salty at all. This was like a bottle of well-aged wine, a product of ancestors’ wisdom.” (Korea JoongAng Daily) According to the Korea Joongang Daily, Ven. Seonje also introduced other Buddhist dishes, such as kimchi, stir-fried mushrooms, and seasoned eggplant. While preparing the kimchi, she held up a head of cabbage and explained to the students the spirit of simplicity and purity of taste in Buddhist cuisine. “People label these cabbages by price,” Seonje said. “But in the world of Buddhism, we never distinguish food by price. This cabbage needed sun, soil, wind, water, and the farmers’ efforts to grow into a vegetable this size. In other words, it was created through the power of the entire universe, which is why we need to respect food.” (Korea JoongAng Daily)

“This is my first time trying out Korean food,” said a student from Poland. “I’m surprised that the spicy taste forms this remarkable harmony with fresh cabbage. I’m thinking of checking out one of the Korean restaurants in Paris.” (Korea JoongAng Daily)

Ven. Seonje also emphasized that temples never throw food away. “The part where she mentioned that they used every part of the ingredients was very impressive,” said another student. “It gave me a chance to look back on how much time and effort is required for a vegetable to grow.” (Korea JoongAng Daily)

“If I were to choose three words to describe Korean Buddhist cuisine, they would be ‘fresh,’ ‘healthy,’ and ‘peaceful,’” said a student from Canada. “I find the philosophy behind these foods very appealing.” (Korea JoongAng Daily)

“It’s quite easy to get what we want with money these days, but we can never buy happiness,” said Eric Briffard, head of Le Cordon Bleu’s cuisine department. “If we compare that to food, seeking simplicity is what really brings us happiness. The spirit of Buddhist cuisine fits well with the modern trend.” (Korea JoongAng Daily)

in most parts of East Asia where Buddhism is most practiced, rice features heavily in as a staple in the Buddhist meal, especially in the form of rice porridge or congee as the usual morning meal. Noodles and other grains may often be served as well. Vegetables of all sorts are generally either stir-fried or cooked in broth with seasonings and may be eaten with various sauces.

Joseon Korea and the French Third Republic concluded the Treaty of Friendship, Commerce and Navigation on 4 June 1886.